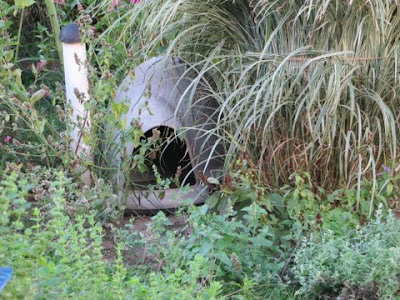 It's that time of year to think about shelters for outside stray cats.  We've been feeding a feral stray sibling pair since fall of 2015. They came running into our yard with their ears clipped so I knew they had been neutered and spayed.  When they began coming regularly, I decided to attempt to socialize them.  Hubby dubbed them Bonnie and Clyde because they ran together. 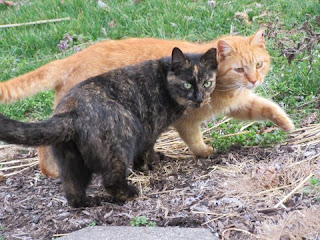 The socialization process has been exceedingly slow.  Two years later, they come regularly for wet food twice a day.  Clyde stays around our property most of the time.  But Bonnie is flighty and goes off on her own to be reunited with him at times during the day.  I don't know where she goes.  We tried confining them in the basement one night when Clyde's paw seemed to be hurting, but they ran out like the devil was chasing them the next day and didn't return for a few more days.  They were even wary about eating.  The thing about ferals is that they want to retain their independence.

However, last year, as soon as cold weather started, they came in for the evening meal, we shut the door and they stayed.  That was huge progress.  They continued to do that through spring and the first part of summer.  Now Bonnie is flighty again.  Some nights she doesn't show up.  Those nights Clyde usual comes inside by himself or watches for her all night.

Clyde especially will rub against my legs at mealtime. Now and then if I don't move too fast, he'll let me pet him.  But they are still not ready to be handled. We've taken care of strays before.  It's not easy to "let go" and give them freedom but that's how they are happiest.

The best scenario this year would be to let Bonnie and Clyde stay in the basement on terrifically cold or bad weather nights.  But as you know, cats don't often cooperate with humans' intentions.  So what my husband and I are going to do is give them options.  Hopefully they'll choose one or two.

We have a patio sunroom that we keep open throughout the year. For winter, we put a shelter and a heated bed inside in one area, a heated pad in another. 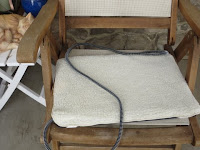 
I lay thermal heat pads on the furniture in the sunroom.  Outside over the years we've added different types of shelters.  Those closest to the house have low wattage heat pads inside.  Among them are an igloo and cedar shelters. If you'd like to consider making a shelter yourself from a cooler, here is a link. 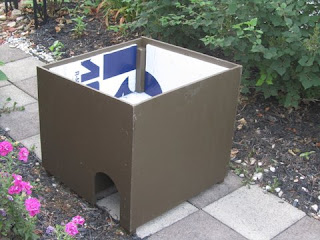 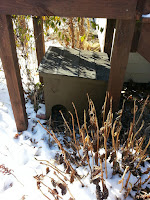 Ally Cat Allies has pages of prebuilt and DIY shelters to examine, many with instructions.

One caution about multi cat shelters. Feral and stray cats don't usually like to share.  Our sibling pair might be an exception.  But roaming loners like their own spot to stay safe, rather than sharing a shelter.  And sometimes a stray would prefer to have the whole property to himself or herself. 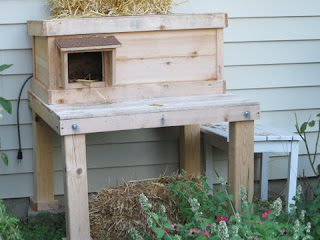 We use straw bales as buffers and protection for the shelters against the elements.  When the flowers are gone and plants don't provide much cover, the bales are also useful on the patio to break the wind. 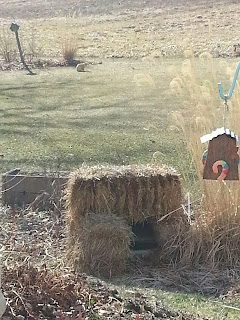 Straw is the preferred bedding if the shelter doesn't have a heat pad. Hay, used as animal feed, gets soggy. Straw is sturdier than hay, usually a golden color. Moisture rolls off of it rather than sinking in. Towels and carpet become damp and mildew.  Cats can nest in straw and it keeps them warm with their body heat. 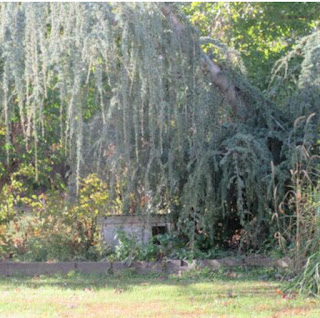 Also important in winter are heated water bowls. We notice the strays drink more water in winter than summer because it's harder to find a water supply.  Here is one option we use but many kinds and brands are available.

Keeping these stray fur babies safe is a challenge. Hopefully they'll take advantage of our hospitality. 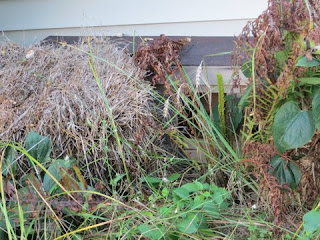