What am I doing wrong?

Everybody always says that I get good stuff at yard/garage sales. I've had quite a few successes with fun things like teacups, teapots, tea paraphernalia, hand-painted dishes, etc.

Here's a cup I got on Sunday when I happened across a sale in my neighborhood. Got it for a buck. 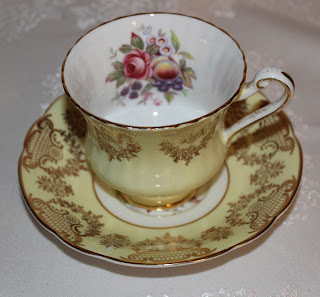 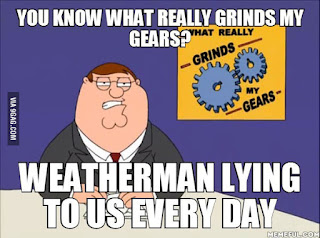 One of my readers said, "I sure would love to go to a garage sale you have." She would have had that opportunity yesterday except ... it got rained out.  My Mum's neighbor and I have been planning to have a sale for weeks.  For the past two weekends the weathermen said, "40-60% chance of rain" and guess what?  GORGEOUS WEATHER both weekends. So we didn't believe them when they said, "40-60% chance of rain" for yesterday. Wouldn't you know -- it POURED.  Neighbor had to haul her stuff in after only 15 minutes. I had all my stuff in my garage, but after two hours and only a few "customers" I gave up. It's supposed to be 80% chance of rain tomorrow. I don't think I'm going to bother to open. And I don't want to open on Saturday when the weather is supposed to be beautiful because I want to go to a community sale.

Mr. L (who didn't want a garage sale to begin with) is such a great guy. He said, "Keep everything up until next week and try again." (I moved everything around so that he could part his car in the garage and I'll park mine outside.)

But getting back to the sale,  I had the last of the stuff from my Mum's estate--mostly kitchen stuff--in the sale. (I'd been saving it in case my brother bought a condo then he wouldn't have to buy all new kitchen stuff. I don't think that's going to happen because Florida has a LOT of bugs and my Sister-In-Law said, "I'm not going where there are A LOT OF BUGS." Having been to Florida and stayed for a while, I know just how terrifying finding a Palmetto bug next to your bed can be.) 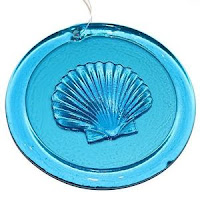 And guess what sold?  My Mum's kitchen stuff. Not the vinyl records, not the DVDs, certainly not the books (not many--I have a real problem parting with books) and not much of anything that was mine. There's good stuff out there, most of which came from my "catch-and-release" program. I bought stuff at sales thinking I could use it and then found I had no place for it. Like that pretty scallop suncatcher. Or the shabby chic roses print. (I actually had two the same and decided to part with one.) Or the lace runners and tablecloths (also duplicates).

Mr. L turned out to be the big winner. He collected old license plates, but when an antiques dealer asked to buy them, he said yes. He would have given them away for Free if I hadn't been there to negotiate. We're talking some (in very good condition) from 1913. (Mr. L doesn't like to haggle.) He made enough money on those license plates for us to have a 2-martini lunch tomorrow.

What did I sell so far? An ornamental shelf (another couldn't find a home for it item), print cartridges for two different printers my cats broke that I had to toss, and a bar of sandalwood soap (it was a three-pack of soaps and sandalwood wasn't my favorite). A grand total of $4 in 2.5 hours.

So I'll be back in the garage soon hoping to find new homes for my old stuff. And if not ... there's always Goodwill.

What's on your treasure list when you hunt for bargains?

Posted by Lorraine Bartlett at 1:00 AM