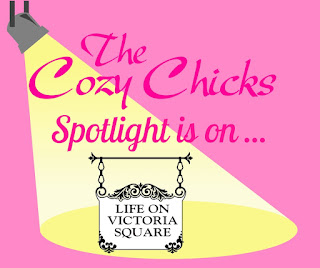 My Victoria Square Mystery series has had a few ups and downs. It came out like gangbusters in 2011--and bam bam--two of the books hit the New York Times bestsellers list.  But then ... there was a nearly four-year lag from the time One Hot Murder came out and Dead, Bath and Beyond was published.

A lot of readers forgot about Katie Bonner and Artisans Alley.

I'm now writing the series with a co-author, but nobody told me my first co-author only had a one-book contract. I assumed we'd write the rest of the books in the contract together. Since her life had taken another turn, I had to find another author. Meanwhile, Victoria Square was once again taken out of the publishing schedule. My agent found the wonderful Gayle Trent (who also writes as Gayle Leeson and Amanda Lee), and we're hard at work on the next book in the series. (So far not titled.) We're back on the publishing schedule, but not until December 2018.  That's 18 months from now. So the big question is -- will readers forget about Katie and Artisans Alley once again?

I began the series featuring Ray Davenport, the former homicide detective who has retired and opened a gift shop on Victoria Square.  In CARVING OUT A PATH, a young shoplifter not only swipes a couple of hand-carved figurines from Ray's Wood U shop, but barrels into and injures Katie Bonner, manager of Artisans Alley. Upon his escape, the police are called, but before the ink is dry on the report, the boy’s grandmother drags the would-be thief back to return the purloined items. She’s got an agenda and great expectations. Can Ray come through in a pinch?

The second installment, A BASKET FULL OF BARGAINS, comes out on Tuesday. This one features Gilda Ringwald-Stratton, owner of Gilda's Gourmet Baskets. Iris Drake is an odd duck. She knows everyone at Artisans Alley arts-and-crafts arcade, but nobody knows her. When she walks into Gilda’s shop on Victoria Square, she’s a stranger there, too—but not for long. Yet she hasn’t to come to Gilda to buy her wares—she’s there to sell some of her own. All goes well until Iris’s secret is exposed. Should Gilda step in to make things right, or walk away from an unpleasant situation?

I've already written a third story (now available for Pre-Order, and to be published on September 8th) called THE BROKEN TEACUP. I hadn't meant to feature Katie Bonner in any of the stories in this series, but I was inspired by a teacup I bought an an estate sale. Katie Bonner needs a pick-me-up one cold and gloomy fall day, and the US Mail delivers—literally. A mysterious package arrives at Artisans Alley with her name on it, but the return address is obscured and the treasure inside, a beautiful bone china teacup, is broken. Before Katie can open the accompanying card, she’s called away and one of the vendors mistakes the package for trash. Katie makes a quick rescue, but the card is gone. Who sent the cup? What is its significance? Can Katie solve this mini mystery?

I'm already plotting the next story, which will come out in either late December or early January.  My goal is to write a new story every three months -- at least until the new novel comes out.

To find out more about the stories, please check out my website.


Posted by Lorraine Bartlett at 6:31 AM