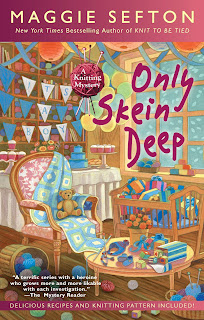 
For today's Spotlight, I'm posting a scene from the new Kelly Flynn Mystery which will be out this coming Tuesday, June 6th.  In this scene, Kelly is recounting a memory for teenager Cassie.


“Yay, Steve,” Cassie teased and returned to the butter yellow yarn on the winder.
Posted by Maggie Sefton at 12:00 AM