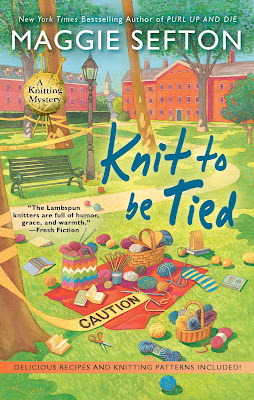 
As I posted last week, Kelly Flynn Mystery #15---ONLY SKEIN DEEP---was released into bookstores and all E-book retail outlets---Amazon, B&N.com, and others.  This Tuesday I want to mention that a new Kelly Flynn paperback has also been released----KNIT TO BE TIED---which was the hardcover release last year in June 2016.

I know that many, many Kelly Flynn mystery readers and fans wait for the paperback release to keep up with the adventures of Kelly and her friends---a.k.a., The Gang.
Posted by Maggie Sefton at 12:00 AM

Email ThisBlogThis!Share to TwitterShare to FacebookShare to Pinterest
Labels: KNIT TO BE TIED, Maggie Sefton