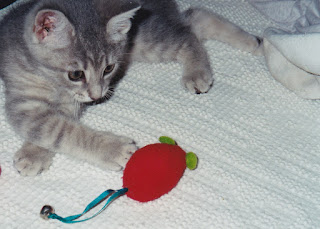 London, our sixteen-year-old senior feline, is now a special needs kitty. We rescued London when a friend who lived on a farm told us that one of their barn cats had delivered a litter in their shed. She was the half-sister of Ebbie who we had also brought home from the same farm. Ebbie and I had made an instant connection when we were visiting our friend who lived on the farm. I knew I had to bring her home. So when the same mama cat delivered a second liter, I knew one of her kittens would be the perfect companion for Ebbie. We spent time with London in the shed until she was old enough to bring home. But Ebbie and London's personalities were definitely different and London sensed my special bond with Ebbie and she sought my husband's affection. 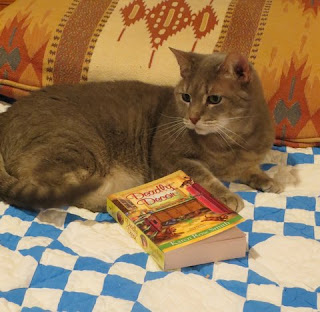 After Ebbie passed almost three years ago, London was the senior cat in the house. She and Zoie Joy, another rescued kitten we brought in the house after finding her in a bush in the backyard, always got along and respected each other's territories. But when Halo and the kittens were introduced into the mix, London became much more territorial and we chose to keep her separated during the day.  When Halo and Paddy retreat to my office at night, London has the run of the house with Zoie...a system which seems to work in everyone's best interest.

About two years ago, we noticed that London, always a robust cat, was losing weight. We had her 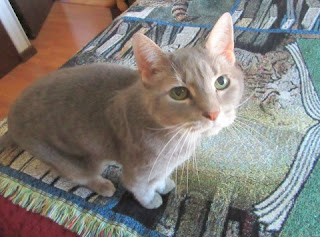 tested and her blood results revealed that she had stage two kidney disease. We changed her diet and she did well, maintaining her new weight over the next two years. Then a few weeks ago, she stopped coming down at night after Halo and Paddy went to my office. Her eyes always seemed to be fully dilated. Fearing blindness, we made an appointment with the vet who confirmed our suspicions. He did a blood pressure reading and blood work. Her blood pressure was high and her blood work showed stage three kidney disease. The vet suggested an ace-inhibitor which could help the blood pressure and stress on the kidneys. 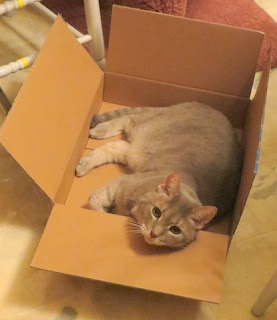 Never an easy cat to medicate, we were concerned about giving London daily meds, but the vet was able to find a compounding pharmacy that prepared her meds in a chicken-flavored oil suspension solution that required only a .2 ml oral dose. London has been on the meds for about two weeks. She has been an excellent patient and her numbers have minimally improved. She has adapted well to her blindness and we have made some changes in how we approach her and speak to her so as not to startle her. 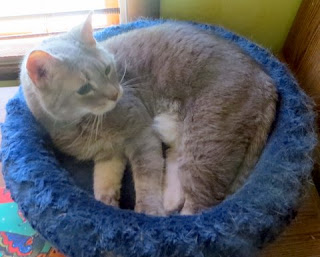 Caring for a senior feline is much the same as caring for an aging loved one. I can only hope that some day if I require special needs attention that I will be as accepting as London.  Thank you London for the valuable life lesson! 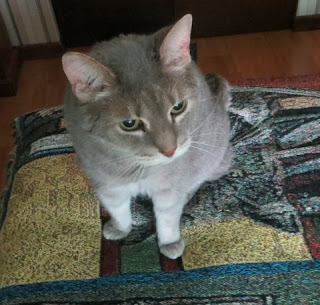 The stray cat that my sleuth, Caprice De Luca rescues in GILT BY ASSOCIATION, the third book in my Caprice De Luca Home Staging mystery series, is based on London. Valentine is adopted by Caprice's Nana and also appears in later mysteries in the series. 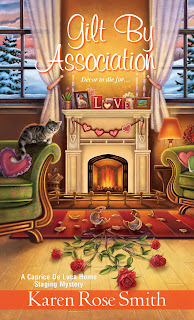 
Between training her new puppy, helping her sister with her baby, and searching for the perfect vintage dress for Kismet's Valentine's Day dance, home-stager Caprice De Luca has a lot on her to-do list. But she's never too busy to do a little staging, and she's looking forward to thawing February's frozen real estate market with her Hearts and Flowers Open House. Her client Louise Downing's romantically decorated home practically staged itself. But when Louise is found murdered, Caprice is forced to turn her attention from sweethearts to suspects. And as the truth comes out in stages, she discovers that Louise had more secrets than a box of chocolate truffles. . .

GILT BY ASSOCIATION on Amazon

GILT BY ASSOCIATION on Barnes and Noble