On Wednesday my friend, Amy, and I went to the Ronald McDonald House sale here in my town. Holy smoke! Can you say CHAOS!!! It was 120,000 square feet of STUFF. If I had a bigger house, I would have spent a FORTUNE. As it is, I spent less than $10--but I was there forthe thrill of the hunt.  Amy's a mom with two young boys, so it was inevitable that she wanted to spend a LOT of time in the toy section, while I was more interested in home furnishings. (Like I have any more room in my house to put them.) We wandered away from one another, but since we both had phones, knew we would eventually find each other again. 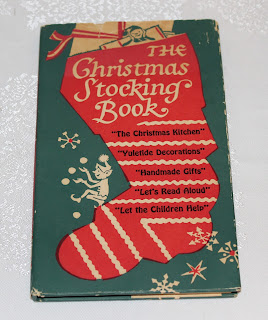 We walked into the HUGE room and were impressed with how all the (vastly overpriced--since 90% of what was there was donated by average people like you and me) merchandise was arranged.  We walked in to a pretty big Christmas section. Wow!  There were things I would have bought had I not already had similar items (like a dozen or so Made-In-Japan Christmas figurines of which I already have at least 200). So it was this little Christmas book that caught my attention and I scooped it up. It's two years older than me (and I'm not admitting how old THAT is).

This little Christmas book is chock full of wonderful little hints on how to have a great holiday. I saw it and fell in love with it. I'm going to save and savor it after Thanksgiving. Don't worry. I won't lose it. I keep all my holiday books in one spot and reread them (or at least look at the pictures) every holiday season. 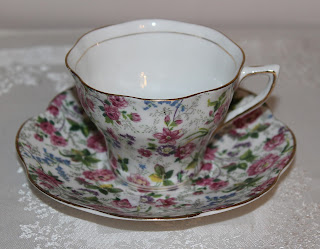 I hoped to find that cabinet for my laundry room, but the only thing that came close to what I wanted already had a sold tag on it.  So I wandered into the first china section. I could have stood there for an hour or more just admiring the china and glassware. I saw this little beauty and snatched it up. I don' t know if it is a "real" Chintz cup, but it was pretty enough for me. It has a hairline crack on the inside, so they gave it to me for half off. Since I'll probably only display it, the crack doesn't bother me a bit.

Next up was the stationery department. Wow.  I bought one thing, and it's the only thing I didn't take a photo of: a very LARGE roll of brown paper for wrapping parcels. In the future, I will use it when I send out prizes to members of Lorraine's Perpetual Tea Party Page on Facebook!  (Want to join? Click this link.) 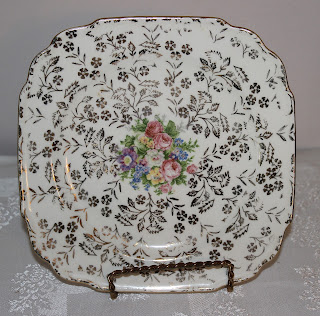 Across from the stationery was the main (with the more common) china section. HOLY COW -- did they have teacups. Probably 30 or 40 beautiful bone china teacups. I already have 40 or 50 teacups, and since they weren't chintz or even pseudo-chintz, I had to pass them by. But the regular plates were reasonably priced (what I'd pay at a yard sale).

My first purchase was a square plate. I collect square plates. I have about 50-60 of them on the wall going down to my finished basement. They're from all over the place/world. I don't know why I started collecting them, I just did. (Do you have a collection like that?) 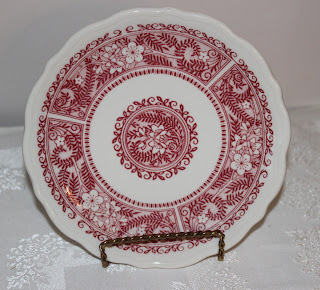 Of course, I was drawn to the very small selection of Syracuse China. I'm a sucker for Syracuse China (which is no longer in business, along with Buffalo China). I have quite a few pieces. This is a sandwich or cake plate. I have two bigger plates in this pattern (in blue) so it immediately caught my eye. There were other pieces I could have bought, but quite frankly I'm running out of room. But there's always room for just one more dish, isn't there?

That was it for the Ronald McDonald House sale, but that's not all I bought this week. 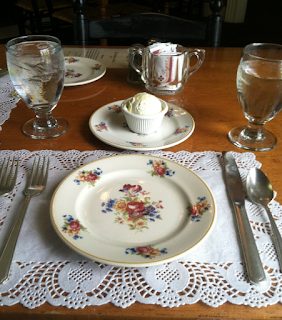 On Tuesday, I took Mr. L to the Holloway House in Bloomfield, NY to celebrate his birthday (which was actually last month, but they weren't open for the season at that time). We had a wonderful meal (actually it was their turkey dinner -- which they serve for Thanksgiving. Whoa! Delish!) I love the charm of his historical restaurant, which was built in the early 1800s.  What I also love is their Syracuse china (pattern = Colonial). Isn't it adorable? I looked up the pattern on Replacements Ltd. and I might just have to buy a small plate just so I can enjoy looking at it at home.

Nearby is an antiques co-op. Of course, not everything in such a co-op is an antique, so it was also full of wonderful collectibles. And I had talked myself out of more than a dozen items until I was about to walk out the door, and that's when I saw this (see below). 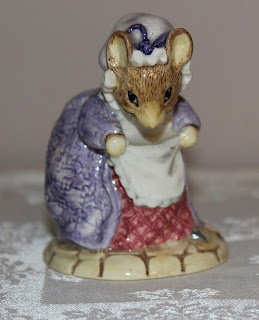 One of my favorite cookbook authors, Susan Branch, collects what she calls Beatrix Potter "people." The characters from the Beatrix Potter books. (I believe her first piece was Jamima Puddle-Duck.) When I saw "Lady Mouse Made a Curtsy" was (dated 1980 and) marked for less than $5, I snatched it right up. (In real life, I DESPISE mice. Anyone who has had them poop on their silverware would feel the same way.) I looked online and saw the same figurine going for $10+. so I think I got a great deal. Despite the fact she's a mouse, she's very cute. She will live in one of my china cabinets.

So that's my "junking" for the week.  Well, maybe not.  There's still Saturday to go!

What treasures have you found while junking?