WOULD YOU EAT THESE WILD AND WACKY FOODS? 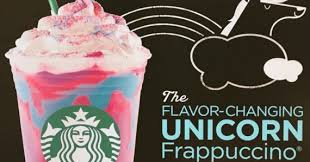 I thought it might be fun to explore some wacky new foods (some new, some old, some will surely vanish!) and get your opinion. First is the Starbucks Unicorn Frappuccino. Supposedly it changes from sweet to sour as you drink it. A little weird, right?  Would you try it? What does it taste like? It's supposed to be cloyingly sweet, with a hint of mango. If you mix up the "blue liquid" part of the drink, the taste suddenly becomes tart. It's gotten mixed reviews and probably won't be around for long. 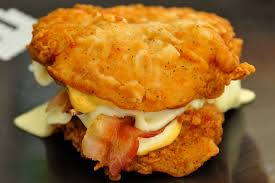 The "double down" from KFC might not be too wacky, if you really, really love chicken breasts. There are two chicken patties and they replace the bun in the double down "sandwich." 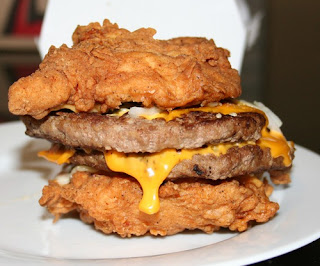 This might be a carnivore's delight or a vegetarian's nightmare. (In the interest of full disclosure, I'm a vegetarian)  It's two chicken patties and two hamburgers squashed in between.. And I see some melted cheese in there. Check your cholesterol at the door. 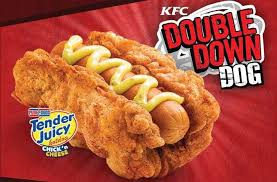 Here's a chicken breast patty being used as a hot dog bun...why would anyone do this? No idea! 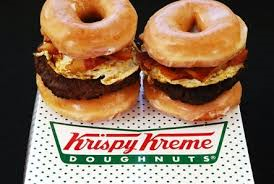 Two Krispy Kreme donuts being used as hamburger buns (Paula Deen says that when she made this on her cooking show, it was a joke.) The hamburger buns in the studio were stale, so she playfully picked up a couple of donuts and used them as bread. She had no idea anyone would take this seriously! But somehow...they did. Be careful what you wish for. 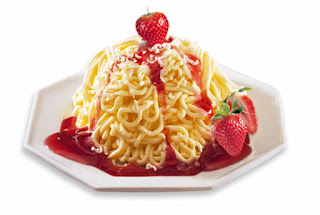 Here's a particularly odd food--is it really spaghetti topped with a cherry? No, it's vanilla ice cream, shaped in spaghetti-like pieces, topped with strawberry sauce. A weird idea and I'm not really sure if anyone would order it. Maybe for the kiddie menu? Not sure. 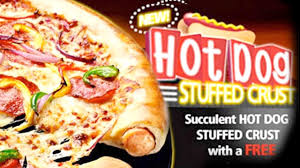 Does pizza go well with hot dogs? In the picture above, the pizza crust is stuff with hot dogs. Can't imagine why! 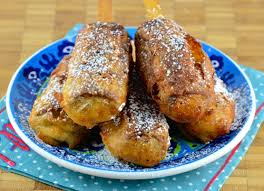 Finally, deep fat fried Twinkies (I know these aren't new, they've been at state fairs for quite a while, but I'm including them anyway.)
Would you eat any of the things pictured above? Just curious!
Mary Kennedy
﻿
﻿
Posted by Dr. Mary Kennedy at 12:00 AM