He won't SHUT UP!

Except for one thing.

HE WON'T SHUT UP.

Fred talks. Not so much during the day. Then he's quiet, except for a steady purr. But around 3 am, he starts to talk. Not even talk ... HOWL.  He walks around the house making the most ungodly noises.  Sometimes he yips. Sometimes he yowls. Sometimes he just hollers.

Is it any wonder I have perpetual dark circles under my eyes? 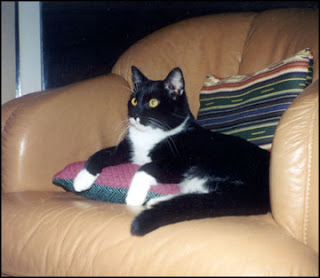 He'll settle down for while and then start up again. Sometimes two or three times.  I'll call him.  He'll jump in bed with me and purr and be happy ... for about a minute. Then off he goes. Sometimes he's quiet, sometimes he isn't.

After a particularly bad night, I'll try and keep him awake during the day. Then I know I'll get some sleep. (Worked for most of last night.)

This has been going on for thirteen years, only lately it seems to be getting worse. I keep thinking about that song ... The Things We Do For Love.  Yep. I love my boy, but I sure wish he wasn't a nocturnal animal.

What does your pet do that drives you crazy?
Posted by Lorraine Bartlett at 6:40 AM