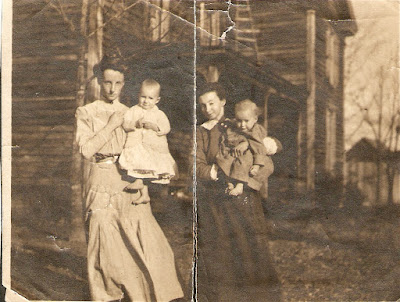 
For today’s post I decided to write about another era.  Scrolling through my photo files gave me the idea.  This old photo shows my maternal grandmother Gertrude holding her first child, my aunt Anna.  My mother, Benny, was the youngest in the family of girls.  The woman standing beside my grandmother is her older sister, Alice, who is holding her first child, Harold.

My grandmother was born in Southern Virginia in 1890 when women still wore corsets and long skirts.  But no frilly or hoop skirts for the women in that era in the semi-rural area where my grandmother grew up.  These women worked around their farms or small land-holdings.  Most people in that era didn't own large tracts of land.  The little city down the road was Chase City,  and like all other towns and farms and land-holdings  in that area of Virginia, it was situated in the super fertile rich land called the Tidewater area. 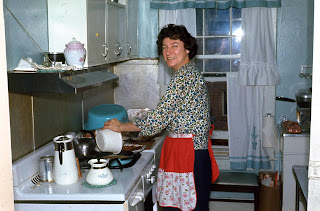 Tidewater Virginia runs from the Atlantic Ocean on the East, due West approximately one-third of the way across the state to what's called "the Fall line."  That's where the land starts its rise toward the Blue Ridge Mountains and the Appalachian chain.  Waterfalls occur along that line.  Little Falls is one on the way to Northern Virginia and another is Great Falls which is larger and more impressive and beautiful.  It's well worth a visit if you live near Northern Virginia.

Above is a photo of my mother when I was a young college student attending George Washington University in Washington, D.C.  That was several years ago, folks.  :)
Readers of the Cozy Chicks Blog have read me saying over the years that my grandmother lived in the house with my mother and me as I grew up in Arlington, Virginia, literally a stone's throw across the Potomac River from Washington, DC.  My childhood friends, two sisters, Nancy and Diane, grew up across the street from me.  As far as I was concerned (and my friends as well), D.C. was "downtown." So, we had the benefit of growing up learning a lot about what ordinary life was like for people---our parents and grandparents---who grew to adulthood in the very early years of the 20th Century----1905 to 1910, for example.  I’ve always thought that for a child who was born to become a novelist, this was an ideal childhood.  I grew up with a reference to an earlier historical time right there in my own home.   And my grandmother Gertrude loved to answer questions.  :)
Posted by Maggie Sefton at 1:45 AM