I don't know if any of you folks have checked into that CNN series hosted by Anthony Bourdain or not, but I have.  It's half travel and exploring different cultures show with a healthy dollop of food and local cafes show.  The show's host Anthony Bourdain, I find to be low-key and well-informed as well as an experienced world traveler.

I first checked into the show at the beginning of this year when there was a succession of shows on
various world cities and the foods and cafes there as well as the people and the various cultures.  Bourdain is a charming guide and has a devilish sense of humor which I find enjoyable. 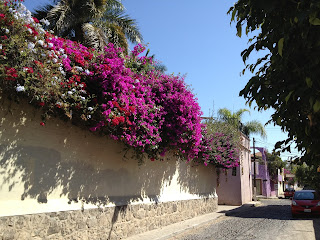 I'm usually not a regular fan of cooking shows on television, having been exposed to all that years and years ago.  Boy, was I ever.  I was one of those early Julia Child fans and had her cookbook and went through a French Chef phase.

We were living in West Lafayette, Indiana, then while my husband was a Professor of Electrical Engineering at Purdue University.  Purdue was and still is a wonderful university, and we were there during that decade where there was a great deal of university/community involvement.  And one of the groups I participated in offered all sorts of university family events.  One of the most enjoyable  was the International Cooking Group which sampled various world cuisines through marvelous faculty dinners.  Lots of yummy food as well as recipes.

That seems to be a period of time that existed for a few years then, poof!  It was gone---lost in the midst of peoples' careers and involvement taking over any free time that was available for simple things like those events.  Do any of you remember similar groups or events that you encountered years ago that are no more?  Share with us, please.  Were any of you also Julia Child fans?
Posted by Maggie Sefton at 12:00 AM