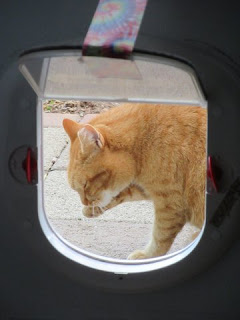 As some of you might know, I'm a cat lover.  We have four inside rescued cats.  One of them, our senior London, has to be separated from the others.  So we really aren't equipped to invited more cats inside the house.  A sibling pair of stray cats my hubby dubbed Bonnie & Clyde have been coming to our outside feeder since fall a year ago. Their ears were clipped so we knew they'd been caught up in a Trap/Neuter/Release program. Another stray we were caring for (and lost last winter) led them there.  We already had shelters on the property for Sunnybud.  We also have a sun room detached from the house at the patio which has shelters and heat pads there.  So we were hoping this winter Bonnie and Clyde would use them. Last winter, we think they were staying under a not-cat-friendly neighbor's porch. But in the spring the neighbor used lattice and stones to block off under the porch so no cats could house there.

After we Sunnybud crossed the rainbow bridge, I vowed I would not get attached to a stray again.  But...

We knew we had to do something to help Bonnie and Clyde.  However, they were definitely feral and so skittish.  Throughout the summer we made progress. We started a relationship by leaving wet food on the patio where they didn't have to worry we'd bother them.  Then we began talking to them through the screen in the basement while they were eating.  Finally by the end of the summer they came inside to eat twice a day if we kept our distance.  Clyde began staying around our property more, though Bonnie was still a flibbertygibbit.  We still don't know where she goes sometimes.

As summer ended, we decided to put a kitty door in the storm door.  Hubby handled that project.  We taped open the door and they began coming in and out.  Clyde even began sleeping on a chair in the basement during the day and in the evening.  As temperatures began dropping, they started climbing up on top of my book boxes near the heat vent.  We had other strays who came in the kitty door to look around (we always take out the food at night) and Bonnie and Clyde felt safe up high. 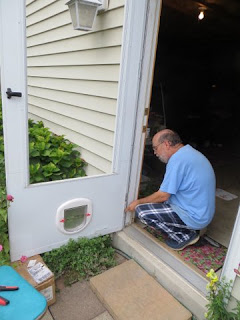 When the temperature dipped below freezing, we decided to try closing them in at night.  The first night was an experiment and to our surprise, another stray had been hiding in the basement!  So we let them out that night.  They came back so I knew they weren't too freaked out.  We tried it again.  To our amazement, they used the litter boxes we provided and slept most of the night.  (We have a camera in the basement to watch their activities.)

A cat we call Scruffy is using one of the outside shelters and possibly the heat bed in the sun room. I know someone has been in it because I put a receiving blanket on the pillow and whoever sleeps there pushes it aside.

There are so many strays who need protection, especially in winter.  Shelters with heat pads or well insulated ones can save their lives.