Last year, I lost my flip phone. I'd had it for about five years, and considering how often I lose things, I thought that was pretty good.  I bought a small Android phone and thought I'd stepped into the 21st century. 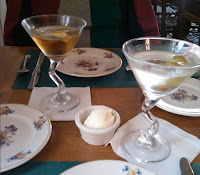 Well, that phone was not only TOO small, but it took crappy pictures, too. So after about six months, I bought a bigger, better Android phone. I actually took time to watch some videos on how to use it (but still have a terrible time typing on the thing).  I downloaded a few apps and with my better camera, took some pictures of my cat (and lots of pictures of lunch martinis) and could even upload them to Instagram.

I sent my first text on Thanksgiving. Since then, I've forgotten how to do it (and don't really have anybody but my brother to text, anyway).

Then in early December, my phone just stopped being a phone. A message came up that said SAFE MODE. I didn't know what that meant, and who had time in December to figure it out?  It no longer rang or vibrated when somebody called me.  All my apps disappeared. I kept charging it in case I had to make a call (and I actually made a couple), but it was relegated to the bottom of my purse.

Last week, my brother had had enough of not being able to reach me.  He bought me a used iPhone 4.  (It's pink!)  Not only did he buy it for me, he put me on his account. (He's a great guy.)

There's just one problem. I don't know how to use it, either.

He's working and won't have time to walk me through using it (which I will probably forget in a heartbeat). Thank goodness for YouTube videos.

I guess the real problem is that I don't like using the phone. I go out of my way NOT to use phones -- cell or otherwise. I do like having the camera, but uploading the pictures has not been easy.

So, why do some people take to cell phones like fish to water and people like me just have a mental block about it?

Posted by Lorraine Bartlett at 7:04 AM