Time to give myself another holiday treat!

Just in time for the holidays, I've written a new Blythe Cove manor story you may want to read. Why? Because I wanted to read this story.

It's starting to become a tradition for me to write a Christmas story for myself. It started back in the 1980s. I started writing a holiday story based on a TV show I loved.  Many years later, while I was working on the early books in the Jeff Resnick series, I wondered how Jeff and Richard celebrated their first Christmas together when Jeff was a teenager. (Need I say it was a disaster?) That story hung around for about five years without being finished. (The First Noel, which eventually found its way into Evolution: Jeff Resnick's Backstory--a collection of stories that chronicle their rocky relationship.) In fact, I wrote another Christmas story for Jeff while The First Noel went nowhere. (Bah! Humbug. Another Christmas disaster for Jeff. That poor guy just can't get a break.) 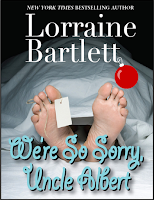 My first "cozy" story wasn't a book, but a Christmas short story called We're So Sorry, Uncle Albert. Can a family get away will killing their skin-flint uncle at Christmastime?  I don't remember what time of year I wrote it; I just remember submitting it to Kindle Shorts and being rejected. They did eventually take it, but the editor there told me they were desperate for content and that I really didn't have much of a future as a writer. (Glad I didn't listen to HIM. BTW, this was before they came out with Kindle readers.)

One year, I didn't have time to write a Christmas story before the holiday. Three weeks later, I went on a cruise where I not only wrote the story I'd been thinking about for four months (Blue Christmas), but finished a Booktown Mystery (I think it was Not The Killing Type, but I could be wrong.)

In October, I wrote a story for my Lotus Bay series (Christmas at Swan's Nest). I thought I'd be Christmas'd out by then, but ... nope. All of a sudden Blythe Calvert (from the Blythe Cove Manor series I share with authors Kelly McClymer and Shirley Hailstock) started nagging me to write her latest ... adventure isn't the right word, since Blythe seldom actually leaves her home ... experience. Yeah, that works for me.  And voila!

All is quiet at Blythe Cove Manor as its proprietress, Blythe Calvert, anticipates a peaceful holiday along with her cat, Martha. But then a taxi pulls up and drops off a troubled, runaway teen looking for a safe haven. Can the magic of Blythe Cove Manor heal this young girl’s aching heart?


What do you do during the holidays as a treat for yourself?
Posted by Lorraine Bartlett at 7:31 AM