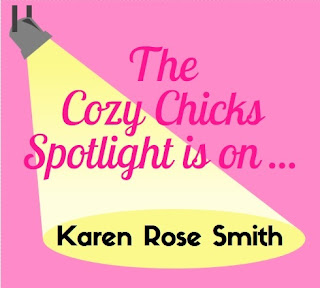 The Christmas season is full of memories, wonderful baking aromas, family and friends gathering around. It's also a time when hope is more than a dream and forgiveness is possible.  I try to incorporate all of this into a romance that surrounds the holidays. As my couples find true love and their happily forever-afters, I hope you can share their joy and let the magic of Christmas touch you too.

The best of the season to all,

In the Comments, please tell me why you like to read holiday romances!

THE DAD WHO SAVED CHRISTMAS

Contemporary romance/marriage of convenience/Christmas
Five-year-old Jakie is hanging mid air on a harness, practicing for the Christmas pageant and Faith Hewitt, his foster mom, can't reach him. Seconds later Nick Clark appears as if he was sent by the angel Jakie is trying to be. Nick lowers Jakie to safety and Faith is hit by her attraction to Nick that she thought evaporated years ago.
Faith had a crush on Nick in high school. But they ran in different crowds and he married a beautiful cheer leader and prom queen. But the gossip mill in Winding Creek worked well and Faith heard that marriage didn't last long before they both left town.
Now Nick was back at least overnight and stranded by a snow storm. He owns a toy store now but isn't in tune with the joy of the Christmas season. She offers her spare room and he accepts. When Nick learns Faith wants to adopt Jakie but that adoption is threatened, he steps up and offers a marriage of convenience.
But is it convenient? Or does the past interfere too much?
Christmas is a time of love and forgiveness. Maybe Faith and Nick can find the spirit of Christmas together.
TOYS AND BABY WISHES

Contemporary romance/Christmas
Joshua Flannigan owns successful toy stores and is protective of the aunt who raised him. When he returns from a backpacking trip to find his aunt's new "friend" Alexandra Kittredge helping her make major life changes, he's suspicious of Lexa's motives. After all, she looks more like a model than a job counselor!
Soon Josh realizes Lexa's sincerity and compassion for others runs her life. Protective of her younger sister who is pregnant, Lexa intends to adopt Dani's baby. But is that really the right move for both of them? Is her compassion blinding her to her sister's actual needs? And what is the secret Lexa is keeping that will affect her life as well as Josh's?
On Christmas Eve, Lexa and Josh find a lifetime of happiness can be just a jingle bell away!

WISH ON THE MOON

Contemporary romance/Christmas
Laura Applegate Sanders' world is turned upside down when Mitch Riley appears on her doorstep with the news her estranged father is about to undergo heart bypass surgery. For the past few years, Mitch has been her father's partner in the jewelry business Laura once dreamed of sharing--until her father disowned her when she married Doug Sanders, an artist with no money and few prospects.
Mitch loves and respects Laura's father as he never could his own. His dad was a drunkard and a gambler who died leaving his wife and two sons destitute when Mitch was fourteen. Knowing how much it would mean to Ray Applegate to see his daughter again, Mitch takes it upon himself to travel to Ohio to ask Laura to come home. To his surprise, he learns she is a widow with a four-year-old daughter, Mandy.
Mitch is prepared to dislike Ray's rebellious daughter because of the pain she caused Ray. But when he meets her, her self-confidence and the love she feels for her daughter throw him for a loop. In self-defense he clings to the image of Laura that Ray has fostered, that of an irrepressible, spoiled rich girl.
After getting to know Laura, Mitch finds her irresistible and their passion takes their relationship to a new level. But Mitch has been betrayed in the past. His lack of trust in Laura causes him to back away to the old life that has left him alone. Soul-searching leads him back to Ohio to admit to Laura his life won't be a happy one until she is in it permanently. A few days before Christmas he returns to Laura's doorstep to give her a ring he designed especially for her. Laura accepts his proposal, eager to find happily-ever-after with him. 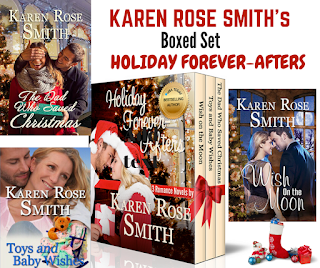 
HOLIDAY FOREVER-AFTERS on Barnes and Noble
Posted by KRS at 1:25 PM