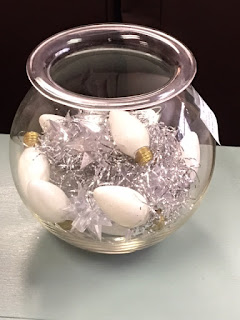 My favorite ornaments when decorating our tree as a child were the glass painted balls.  They were painted in many colors, or frosted, or had rainbow centers that caught the light.   I still have two of those large balls and use them in my Christmas decorations. 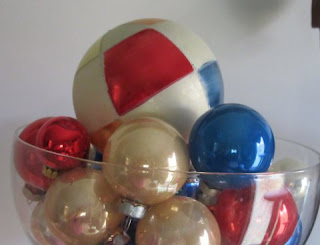 We have a "wall tree" because of our four felines so I find other ways to decorate with shiny ornaments, some from the past.

I remember the special lights on the string that bubbled after they were lit for a while.  They were my favorites. Lights of old heated up too much, so twinkle lights were born and now LED. I have a strand of blue ones in my office that I leave lit long after Christmas. 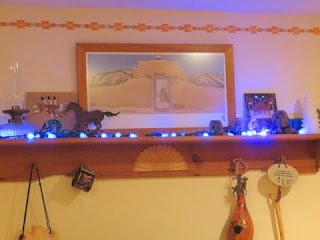 When I was a little girl one of the most fun aspects of setting up the tree was decorating it with tinsel after the ornaments were hung. I liked to toss it in the branches and let it stribble over others. 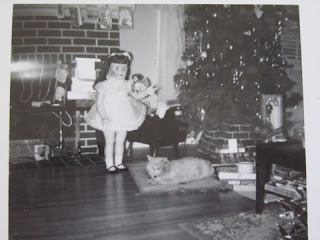 My mom was much more sedate about it and would hang the strands separately on each branch. Tinsel started out being a crinkled silver material and developed into bright silver strands then shiny red, green, blue and gold strands too. 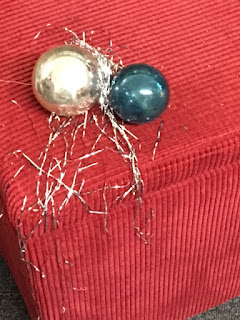 There was a restaurant we used to dine at near Christmas that decorated scenes with angel hair. It was wispy and hard to arrange but it was beautiful when the light shone through it. We used it in our home on a train layout around a mirror that was supposed to be a lake. 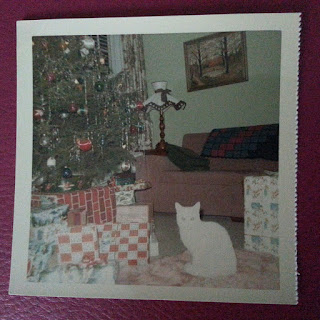 And then there were the store fronts. Our downtown in York, Pennsylvania had three major department stores--Bon Ton, Jacks, and Bears.  All the windows were decorated with mechanical toys, similar the the photo below. One of our Christmas traditions for my mom and me was to go "downtown" after school on a Friday night to preview the windows that were all color and lights. 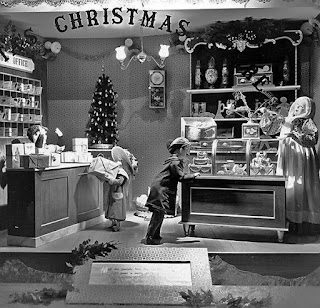