Sometimes you have to do things you don't want to do. Over the summer, I learned to stab my cat. 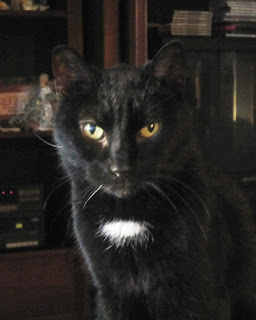 Actually, he's not at ALL my cat. Chester belongs to Mr. L and he suffers from kidney failure. He was going back and forth to the vet for a while and finally the vet (not OUR vet) said, in no uncertain terms, that if we didn't hospitalize Chester that he would die within a couple of days.

Why were we hesitant to board him?

Nine months before, we boarded Chester for 8 days when we took a trip. He needed to be medicated (for something entirely different) and my brother, who was taking care of the cats, wasn't up to that.  But every time Mr. L called to see how Chester was, he was inching closer to death. He wouldn't eat, he wouldn't drink. They were having to hydrate him every day. Finally, we called my brother and said, "Bring him him." He did, and Chester did a turnaround pretty darn quick. By the time we returned two days later, he was in the pink.

Fast forward nine months and Chester was going downhill. Mind you, he's 18.5 years old. We've never had a boy cat live that long. But he needed fluids every three days. For a while, we were taking him to the vet, but it got to be more and more inconvenient because they had to squeeze him in between appointments. And another thing, Chester does not travel well in the car. It was very upsetting for him to have to travel every three days to a place he despised.

So it was decided that Mr. L would learn to give Chester his fluids. We went to the vet, got our lesson in subcutaneous fluids, were handed a bag of lactated ringers and a bag of 18 gauge needles and sent home to do the deed. I was surprised that many of my readers/Facebook friends had also given their cats (and a couple of dogs) a new lease on life with fluids, and was grateful for their encouragement of "you can do this!" 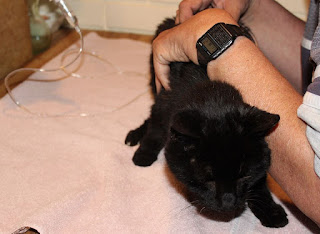 For the first couple of times, Mr. L did the deed. But then no matter what we did, we were spraying ringers all around the kitchen, and Chester wasn't getting his fluids. That's when I took over. Some days it works well, and he doesn't flinch when I stab him, and some days it doesn't go well. The vet techs (and OUR vet) both assured us that they screw up on a regular basis, but not that we've ever seen.

We've been doing this for almost four months now and Chester is back to being his old self. He kills his Beanie Babies on a regular basis (distributing them around the house), he eats and drinks well, and he's usually on one of our laps at any given time of the day. (But mostly Mr. L's because ... you know, Chester owns Mr. L.)

To what lengths are you willing to go to keep a pet alive?

Posted by Lorraine Bartlett at 6:39 AM