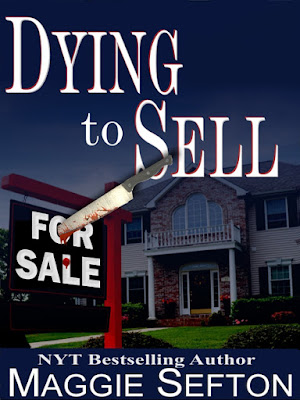 
Today on Spotlight Saturday, I want to bring back one of my favorite mystery suspense novels that I wrote years ago----DYING TO SELL.  It was published the very same year that the first Kelly Flynn mystery came out.  That first Kelly Flynn mystery, KNIT ONE, KILL TWO, went on to establish Kelly and all her friends with readers, for which I am eternally grateful.  Thank you, thank you, Readers.  But today, I want to spotlight the "other" mystery that came out that year, 2005.  The 55-year old heroine, Kate Doyle, was a great amateur sleuth to follow.  Here's a little taste-----

Realtor Kate Doyle knew divorce was messy, but she didn't expect it to be bloody. Kate agrees to sell the home of old friends who're locked in bitter wrangling and manages to keep the peace long enough to get signatures on contracts. She congratulates herself on what will be an easy sale in this upscale Colorado college town. However, Kate's celebration turns to horror when she walks into the lawyer-client's study to find him brutally murdered - stabbed in the throat. "A crime of passion," says Kate's police detective brother-in-law. The prime suspect is Kate's close friend, the spurned wife, who begs Kate to help her. Kate's meddling turns up some surprising suspects. The successful lawyer deceived numerous ex-lovers as well as his wife. He'd also played off one land developer against another, dangling a choice tract of land as bait. Businesses were ruined and fortunes lost. Had the loser taken revenge on the wily lawyer? Or had an ex-lover killed in jealous rage? Kate's real estate license helps her dig into the clever lawyer's dealings as she sifts clues from cyber space to crawl space. Unfortunately, her snooping tempts the killer to exercise his own license - to kill.
Posted by Maggie Sefton at 11:04 AM

Email ThisBlogThis!Share to TwitterShare to FacebookShare to Pinterest
Labels: Dying to Sell, In the Spotlight, Maggie Sefton, spotlight