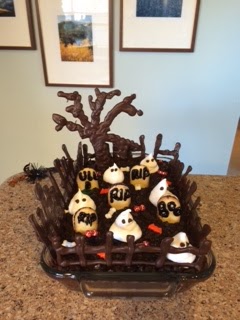 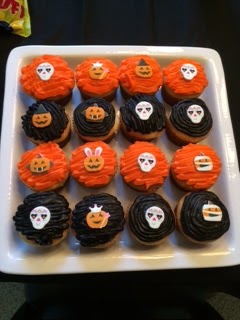 Some of the Halloween cupcakes daughter Serena in Houston made for a Halloween party her family had a couple of years ago. 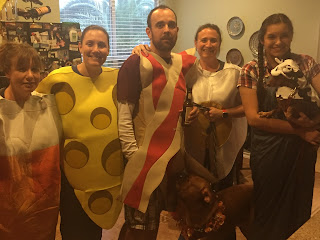 This weekend I bought my first bag of Halloween candy.  I was careful not to open it yet and will not open it until Halloween afternoon---just to be safe.  Why?  Because that bag----which is the first of three that I will buy---is filled with Tootsie Rolls and other candies.  Tootsie Rolls were a childhood favorite, and---to be honest---they still are.  Those and the all time favorite Peppermint Patties.  Those patties have also survived into present day in a slightly smaller size.  I've always found that
strangely reassuring.

At right, daughters Melissa, Maria along with son-in-law Jeff and daughter Serena---along with "new" granddaughter Serafina (Jeff's daughter).  They're all heading to a Halloween party at friends in a Houston, TX suburb last year.


Some things from my childhood---which was quite a while ago, folks---are still around today.  I suppose that many people have the same "sweet tooth" that I do.  So, they have survived.  And now, there is a very nice trade-off, too.  Now that the calorie count and breakdown of ingredients are 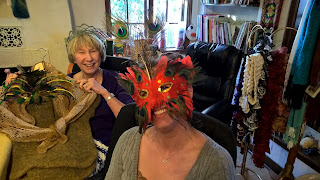 displayed on the back of each candy's wrapper, we find that our old favorite candies are actually not all that high in fat and sugar.  That's reassuring----and helps convince us to reach for that bowl of Halloween candy sitting beside the front door.  :)


Incidentally, I've noticed the number of children trick-or-treating has increased over the years as well as the age groups.  Now---parents bring out the very young ones---some even babies---in the early evening, right after dinner.  Next are the pre-school kids with parents standing in the yard, beaming.  After those, the largest group of elementary school age children dominate the next two hours.  They are followed by the "larger" children---clearly junior high school age kids and they are wearing some of the funniest costumes you'll ever see.
Posted by Maggie Sefton at 12:00 AM