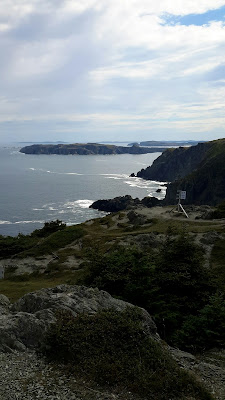 Last week at a book launch, my friend, Grace K (I know you are reading this!) , reminded me that although I had asked your opinion about footwear and all that before heading to Newfoundland for a bucket list trip this August, I hadn’t shown you any of the photos.  Mortification!  So here’s a long post with just a few of our many photos. 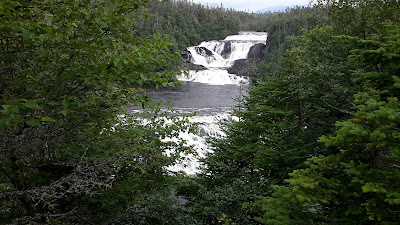 We had a wonderful time in Newfoundland, a huge province.  The Newfoundlanders are special, friendly and full of fun. Every one of them seems to have a story to tell.  This and the spectacular scenery made for an excellent trip.  We tried to travel to all four corners and to enjoy Gros Morne National Park, and from there headed north.  It was a six mile round trip hike through the woods to this waterfall, but it was really worth the walk.

Here's the first village, Norris Harbour, in the night from the balcony. 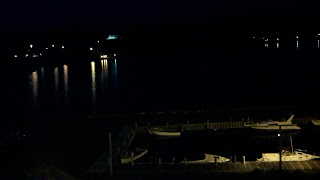 While in the park we visited Western Brook Pond (a four mile walk in and out - but easy and flat).  A 'pond' is Newfoundland for fjord. They are deeper than the ones in Norway.  Here's a scene from that boat trip. 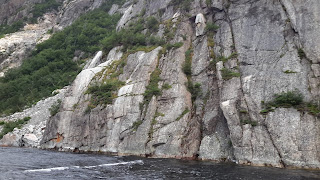 Next we stayed in a place called St. Anthony  (pronounced Snantny by the locals). There we saw the museum dedicated to Dr. Wilfred Grenfell, who brought medicine and hope to these remote settlements. 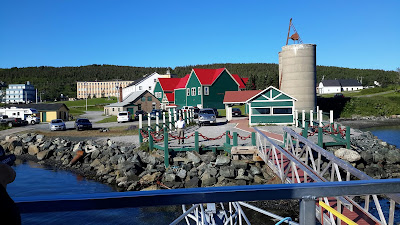 While there we took a boat from this dock to look for whales. 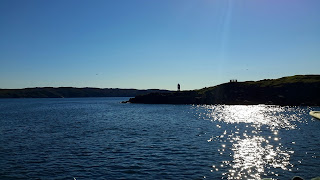 We did see three humpbacks and six frolicking dolphins (!), but they refused to pose for photos.  Still thrilling though.

We visited other fishing villages, sometimes enjoying the fresh seafood, like these fresh shrimp burgers from the fishery across the street from the restaurant in Port au Choix. 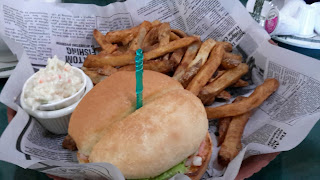 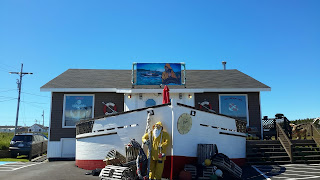 We also saw a moose and it saw us.  Another first.


Finally, we reached the Viking settlements at L’anse aux meadows in the far north east tip of the land mass. Apparently, this was the place to explore for Vikings a thousand years ago and the site has been recreated by Parks Canada after the archaeological find back in the 1960’s.  Here's a nifty modern sculpture based on Viking images. 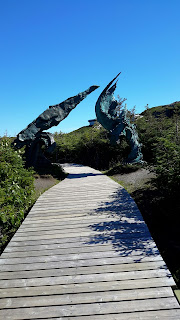 One of our guides was there during the original ‘dig’.  There was also a second reconstruction that we enjoyed.  We felt connected. It was lots of fun as the ‘Vikings’ were very chatty. 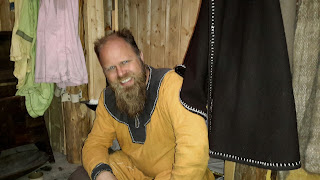 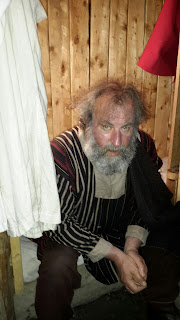 We had a great dinner at The Norseman that night. The Newfoundland specialty partridgeberries made the poultry very interesting. They are called Lingonberries in Scandinavia, I think. 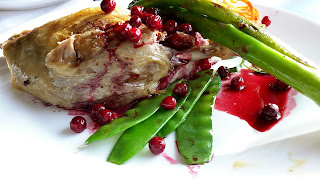 We zipped back (well a four hour drive) so that we could walk on what is known as the ‘Tablelands’ an amazing example where the earth’s core pushed up through the surface some gazillions of years ago.


When I think of Mars this is what comes to mind (even though I know it isn’t true). 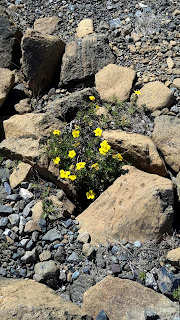 Unfortunately, although I had my boots, the weather was quite hot and as the walk across the tablelands was described as easy, I was wearing twinkly sandals (below)  At least my feet were cool and in the end I didn’t snap an ankle.   We loved these red chairs. 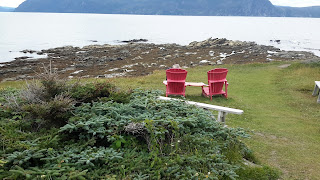 There were 18 pairs scattered throughout the national park (some in the woods) and the idea was to get your picture taken in all.  We managed to find ten pairs. 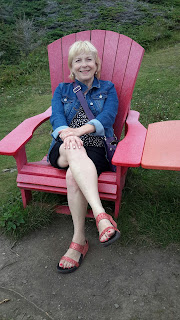 We found this lighthouse at Lobster Head. 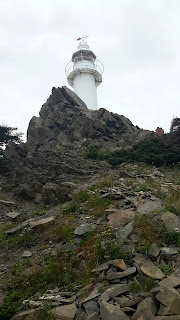 More dashing ensued as we headed for the picturesque village of Twillingate.  It is a lovely place to relax and ramble. 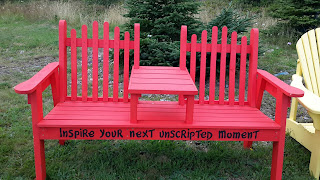 A few short miles from there was Crow Head with its iconic lighthouse and a wonderful seacoast trail. 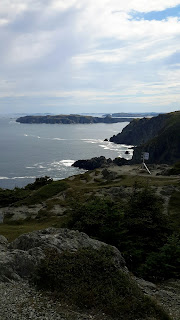 From Twillingate we headed south and west to Fortune to catch the ferry to St. Pierre and Miquelon, a little bit of France right off the coast of Canada.  We needed passports and euros! But I’ll talk about these islands on a later post. Here's the 'ferry' actually a hydrofoil. 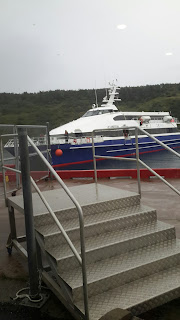 Back in Newfoundland, we headed for St. John’s, the capital.  After we struggled up three flights of stairs with what we’d started to think of as our steamer trunks, we found quite an amazing room there with a heart-shaped bathtub (surrounded by candles and wine glasses) and a clear view through to the entirely glass shower.  When we stopped laughing, we headed out for an unromantic but essential dinner at Ches’s, famous far and wide for fish and chips especially served with ‘dressing’ and gravy.  I declined but the hubby felt he had to man up.   Well!  That is a truly delicious surprise and I may have helped myself to some. A month later I have worked off the calories. 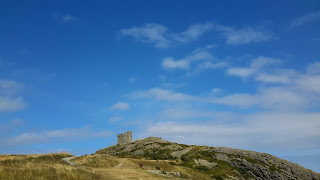 In St. John’s we found Signal Hill, a high and historic spot with a long military history. You can see how small the building looks from our start! 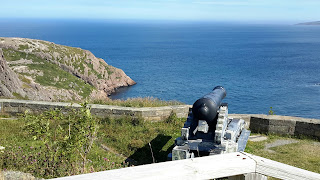 On 12 December 1901, the first transatlantic wireless transmission was received here by Marconi in an abandoned hospital, which has since been destroyed by fire. The transmission, in Morse Code, originated from his station in Cornwall.   We were quite proud of ourselves climbing the hill and then Cabot Tower and seeing the 360 degree views. 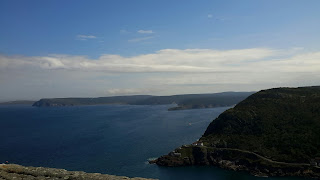 .  There are lots of great vistas in St. John's.  This is from "The Room', the art gallery and archives.   It's a beautiful building, but alas the photo has disappeared. 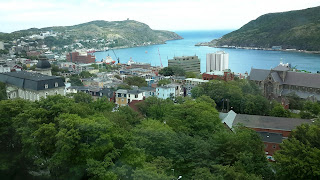 Our weather was fabulous until the last day, when we got caught in a rain storm at Cape Spear, the most easterly point in North America.   Here's the storm coming in - looks like innocent fog, doesn't it? 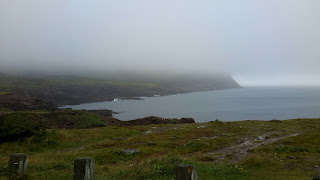 Did you know that rain can be completely sideways?  Yikes.  Our raincoats and those boots were locked in the trunk of the rental.

When we finally got back to the car, there was more than a cup of water in each of my running shoes.  We needed to change everything in the restrooms of the first restaurant we came to, a wonderful place in Petty Harbour, called Chafe’s.  Somehow the lunch made us feel warm and happy again.  Being dry helped too.  Here's my hubby's meal.  Loosen the belt. 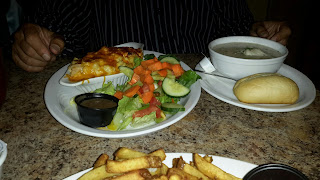 At the end of our bucket list trip, we realized we had not seen everything by a long shot and Newfoundland remains on the bucket list for another trip.  Maybe we’ll see you there!

Speaking of trips, don't forget The Hammett Hex is now out.  You can travel to San Francisco.  Just saying.

And now, how about dropping by and telling us about your favorite trips or bucket list items. If I'm quiet it's because I'm on the way to Nova Scotia to continue research for new Camilla MacPhee book.  It's a tough life being an author, but you can expect a report.