I'm swamped working on Booktown #11 -- so my character Jeff Resnick has written today's blog. Take it away, Jeff!

~ ~ ~
Damn alarm clock! Not what you need when you've slept like crap for days. Okay, it could be worse. Having Herschel attached to me like a leach all night doesn’t help either.

Time for the news.

Nothing like sitting in your underwear catching up on the latest news because it’s easier than waiting for the stinking computer to get to your news feed's home page.

Elections: Okay. ISIS: Okay. But what about any big local thing? Here we go; latest from good old Channel 4.

Maybe I shouldn’t wake up Rich too soon for this one!

I’ve known about the New Era Cap Company for years, but never realized how big they are. They are changing the name of the Ralph Wilson Stadium to the New Era Field! And here they are a local company willing to bail out the Bills for years. Then there’s my brother, the consummate Bills fan. Poor schmuck.

Okay, Richard you might as well hear the news and see what you think.

But, this may not be bad after all if it works. God only knows the team has tried just about everything to get back into a winning position.

If we finally have a winning season in Buffalo, I will happily share my brother's season tickets! Training camp in Rochester looked very promising these past couple of weeks. This might be the year we can have fun watching the Bills on Sunday, even if we’re staying warm and away from the drunks watching it on the tube!

But, back to Buffalo. I see things are still happening down at the waterfront. Do you want to see those lit-up grain elevators that look like Labatts cans one night or not? I think we need a night out. And if we're lucky, Brenda might even approve. 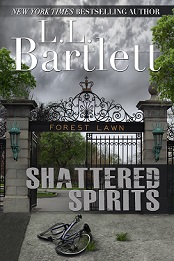 Join Jeff and Richard on their latest adventure in SHATTERED SPIRITS.

While riding his new racing bike, Jeff is hit by an SUV, an accident which has a cascade effect on his life. He loses his job to a replacement, his girlfriend pressures him to move in, his bank accounts are hacked, and a restless spirit begs for his help—all in less than a week. But it’s soon apparent that his so-called random accident is anything but, and the murder of a close friend has a hobbled Jeff on the run. Can he discover who’s out to destroy his life—and threaten those he loves most?

Find it on:  Amazon | Kindle US | Kindle Worldwide