And so it's now July and we haven't put in our veggie garden. Mr. L dislocated his shoulder seven weeks ago and that put half of May and almost all of June in the toilet as far as plans for the garden went. (Did I mention I write for a living and that it takes up a LOT of my time???) 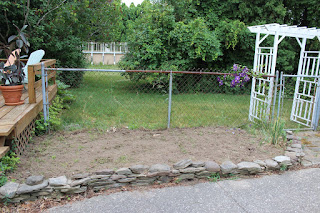 Since Mr. L wasn't going to be able to turn over the garden, we hired a landscaping firm to do it. Oh, and they also weeded the gardens (including ripping out Mr. L's bleeding hearts, because apparently they can't tell a flower from a weed, and I had to threaten mayhem when one of the workers thought it would be a good idea to take out my rhubarb, too) and put down new mulch.

Today--the veggies go in. Not a lot -- seven tomatoes and two pepper plants. I put them in the (small) bushel basket so they'd stand straight. I was afraid the (slight) breeze would topple them. They're going to need staking. 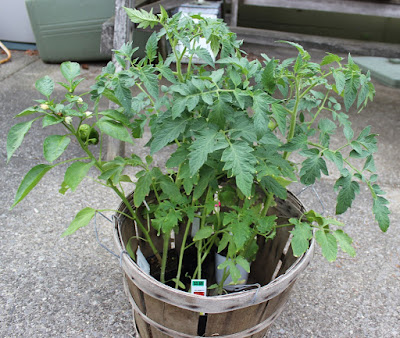 They're a bit leggy, and no doubt pot bound, but with a good dose of compost water, they should be good to go.

My potted zucchini plant seems very happy. It has now produced a second zucchini.  The first one was bitten by some critter (which is now why the pot is living on top of the picnic table) and stopped growing. It said, "OUCH" and lost the will to live.  But the second one is now about three inches long. I see stir fry in my future! 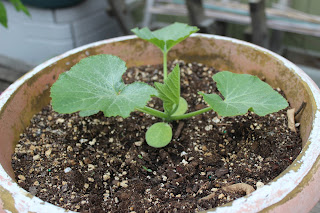 A little over a week ago, I rescued a "volunteer" squash from my compost pail. It could be a delicata (I hope!!!) or an acorn plant, since those are the only two kinds of squash we remember eating during the past year. It didn't take off like the zucchini did, but I'm hopeful we'll find out what it is in the near future. 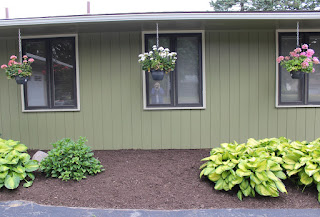 While at the garden store, we decided to buy a couple of knockout rose bushes ... except -- they didn't have the colors we wanted, so we only ended up getting one. We hit another nursery, but they only had the same colors. There's yet another one we intend to try early next week to fill a whole in front of the house. We had three small rhododendrons that were killed by snow being piled upon them by our plow guy. I'm going to cut back the roses and protect them (you can get cardboard thingys -- our neighbors use them and their roses were full of blooms this year). 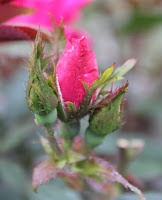 So this morning is blocked out for planting the veggies. The weather is perfect -- cool and overcast. No sunburn! And next week we'll plant the roses. 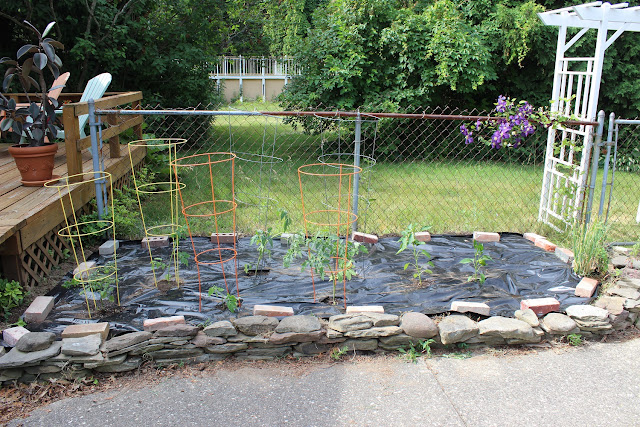 Posted by Lorraine Bartlett at 7:42 AM