The Spotlight is on Brenda Stanley 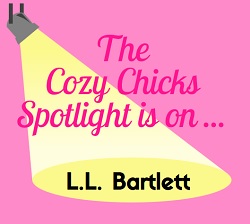 My name is Brenda Stanley. I'm a wife, a mom, a sister-in-law, a sister, a friend, a daughter, and a nurse, and that's pretty much how I define myself--at least at this stage of my life. Talk to me in a week and the order might be different.

Most of the time, I lead a pretty nice, quiet (rather boring) life in Buffalo, NY. I'm not from Western New York. I was born in the city of brotherly love (Philadelphia), and lived there for the first twenty five years of my life.

I was a twin, and there were no two sisters closer than me and the other half of my soul, Ruth. (I used to call her Toothie Ruthie--although we were identical and she did NOT have bad teeth. They were exactly like mine, but it drove her nuts and that was the point, right?) We had such fun. Had. She died--hit by a drunk driver when we were twenty-three. That--and the following two years--were the worst of my life. A rushed romance, a fast (and short) marriage to an abuser. I needed to get away from Philly. So I ran away from home and got a job at a think tank outside of Los Angeles.  And that's when my life took a dramatic turn for the better. That's where I met my husband.

Of course, he wasn't my husband right away. In fact, he was my boss.  I know, I know--you should never get involved with your boss, but he was such a nice guy. I admit; it was me who pursued him. He'd been unlucky in love--and more than once--so he wasn't looking for someone to warm his bed. I called him "Boss."  (It drove him nuts. Do you see a pattern here?)  Hey, Boss!  Here're those files you needed.  Hey, Boss did you remember to eat today?  Hey, Boss, aren't these the cutest shoes you've ever seen? (Insert image of him rolling his eyes at that. He's just not into shoes.)

That was the best job ... but there were drawbacks. The biggest being my mother. She didn't like my significant other. He wasn't the right color. I didn't tell her we'd moved in, but it got back to her. (Thank you older sister, Evelyn, for spilling the beans.) My mama didn't speak to me for nine years--but that's another story, too.

The Boss, er, I mean Richard, thought it would be a good idea if we got married. (He's old fashioned that way.) I loved him. I loved being with him. But married?  Been there, done that--wasn't about to go for it again. He asked a lot. I turned him down a lot.

Money at the think tank was getting tight, and they decided to eliminate our little two-person department. So, that job ended and Richard, decided he would like to leave the land of sunshine and move back to his hometown of Buffalo, New York--in JANUARY. (He did consult me, but I could see his mind was pretty much made up.)  I knew about winter in the Northeast. Hey, I'm from Philly, but Buffalo winters are different. It's called lake-effect snow and it's brutal. Richard wasn't exactly the most jolly person to be around right about then, either. (Men. Job loss. Ego. The whole deal.) And then one morning, very early ... the phone rang.

It was the NYPD calling to say Richard's half-brother, Jeffy (I always call him that. Drives him nuts) had been brutally mugged and was in a coma. You never saw somebody hop on a plane so fast in your life. I spent a terrible few days alone in that big (COLD), lonely house on my own, wishing I had gone with him; but the furnace guy was coming and somebody had to be there to open the door. I'd met Jeffy exactly twice when he came back to Buffalo to live with us in the house he had occupied for three-plus very unhappy years as a teen, so you can imagine how thrilled he was to be returning. (Not at all.)  Nobody likes charity, and he least of all. He was determined to recover and get the hell out. But it didn't happen that way, and life for all of us became very complicated.

You see ... as a consequence of that head injury Jeffy became just a teensy bit psychic.  (Oh, yeah, that went over really well with Richard. Not!) But I recognized it. You see, I have a little bit of the second sight myself. (Richard always called them hunches.) So Jeffy and I are kindred spirits. He's someone really special. (Not that he thinks so.) Before the mugging, he was an insurance investigator. Not the kind that looks at banged-up cars or anything--but a trained crime-scene investigator. After his wife was murdered, though, he transferred to the fraud department. Crime scenes no longer interested him.

Jeffy's kind of hard to get to know. He doesn't reveal much about himself. He's quiet--doesn't make waves ... until he gets what I call one of his "episodes." When his psychic insight makes an appearance all hell can break loose, and it didn't take long after he returned to Buffalo for him to start to have some pretty scary visions. Visions that gave him information about a murder. And didn't he feel compelled to find out who did the deed? It wasn't a pretty end. Richard ended up in the hospital--nearly died. Oh, God, what a mess. But ... it brought us all closer. And I kind of changed my mind about the whole marriage thing ,,,

But that was just the beginning of our adventures. Okay, I mostly sit on the sidelines while the dynamic duo do their investigating thing. I did the volunteer thing for a while at a women's health clinic and the local hospital's low-income clinic. I loved the work. I loved the people. But then ... someone decided to stalk me. And wouldn't you know it--my ex-husband showed up on our doorstep about the same time. (My mother gave him my address. *Sigh* I was remarried--why would she think I'd be interested in seeing him?)

What an awful time in our lives ... because I also had a miscarriage.  I quit my jobs. The stalker actually broke into our home--oh, it was awful. For a while, I didn't know if I could even live in that house again.

I could go on and on ... but maybe it would just be better if you read about our "adventures." Jeffy kind of keeps an account of things. The first account is known as Murder On The Mind. (And it's FREE in all ebook formats. Click this link for more information.)

Jeffy never looks for trouble--but somehow it always finds him. He's just wrapping up the account of our most recent trials and tribulations. It's called Shattered Spirits. (You can read about it here.)

Okay, it's time for me to get back to keeping the home fires burning. At least ... until the next time Jeffy has one of his episodes, because when they come, we never know what will happen next.

P.S.  Let me know if you have any questions about the Alpert-Stanley-Resnick household.
Posted by Lorraine Bartlett at 7:22 AM