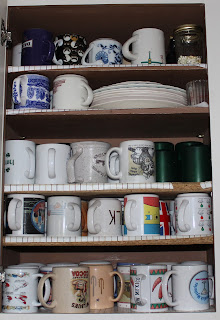 Mr. L and I have an entire cupboard filled with coffee (and for me, tea) mugs. (Okay, except for a few plates that I bought at a yard sale, and maybe a votive candle holder, a couple of plastic glasses, and a jar with some bean seeds.) Some of them we've been drinking out of for nearly 25 years. (It's our big anniversary next month - and if I don't get a BIG CAKE there's going to be hell to pay!!! Just sayin'.)

We've got cups we bought each other, that my mother bought me (before we were married) that my aunt gave my mother, and she gave me, and what we bought on vacations. 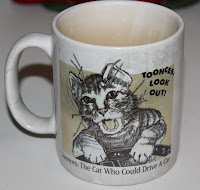 We've got souvenir mugs from Maine, Edinburgh, Toonces the Cat (from Saturday Night Live), Star Trek (lots of those), Frank Lloyd Wright houses in Chicago, The (Frank Lloyd Wright) Larkin Company mug (from Buffalo); the Roycroft mug (from East Aurora, NY and the whole US Roycroft arts and crafts movement); my Mum's blue willow or blue Danube mugs; mug from Lombard Street (that zig-zags) in San Francisco (and nearly scared the poop righ tout of me when Mr. L drove me and my parents down it at break-neck speed), the 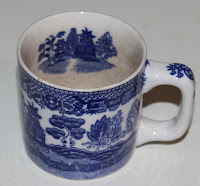 MILK mug I bought in LA when I lived there for way to short a time, chili peppers from New Mexico, Cadbury's Dairy Milk (chocolate) mug obtained at a charity shop in St. Andrews. Scotland (where Prince William went to university and met Kate Middleton). etc. The "How To Eat A Lobster" mug from Maine, given to me by my very first publisher. The howling wolf mug Mr. L bought at on a business trip to Scottsdale, AZ. The mug I gave Mr. L from the Henry Ford Museum that I bought when we were just courting (and I got him a T-shirt, too--and wasn't that indicative of TRUE LOVE???). 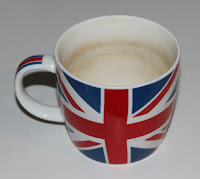 I have a bunch of favorites, as does Mr. L.  My current favorite is the Union Jack.. You can tell by the tea and coffees stains how much we love and use it. (Gotta get out the baking soda and give it a good scrub.)

My favorite for the past two years has been my Union Jack mug.I got it in Niagara-On-The-Lake in Ontario Canada (at the Scottish shop, of all places). It's not all that high, but WIDE and you can get a really nice cup of tea in it.

As you can see, we really have far too many for just two people to use. (Himself (the Irish mug); Britannia (the former Royal Yacht mug) the Jeff Resnick mug my mother asked me to give her; chili peppers from New Mexico; the Litiz, PA Wilbur Chocolate Factory mug. Christmas and Halloween mugs,

We keep saying we're going to downsize them, but then we start reminiscing, and none of them go in the charity box.

Are you keeping something similar that you really should get rid of, too?