MJ here. I was away this past weekend at the best college reunion ever—reports to follow next week— and returned home all mellow and well-fed and happy, to discover that the dogs had encountered their nemesis. 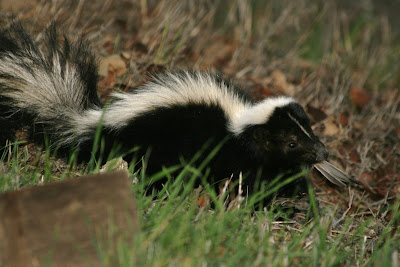 Let’s step back and say that there is a policy about not letting the dogs dash forth into the blackness ahead of the human.  However, this policy appears not to have been enforced in my absence.  The human (for the sake of anonymity, we’ll call him “Dad”) was carting a collection of plastic containers to the recycle box when the pooches shot by him.  The signs of excitement had been there, may I add. As well, there had been indications of a skunk.  I had been suspecting a certain neighbor smoking dope, although others preferred the skunk theory.

Dad described the Sunday midnight incident, including dialogue. All the dialogue went like this: NO NO NO!

The pooches cornered the poor skunk,  by the large rock, and naturally misinterpreted the cues of  the white stripe, the back turned and the lifted tail. NO NO NO!

Lily got it full force.  “Dad” couldn’t let her back in the house, until he had Googled some remedies on his tablet (I am not making this up). The dogs wailed at the door until he found that tomato juice and vinegar are effective.  Of course, we didn’t have tomato juice.  He mixed up a combo of pasta sauce and cider vinegar and bathed Lily before she could be let in again.  She was well and truly rinsed  (and probably delicious) before re-entry.  Hours later, the household got to sleep.  Don’t ask me where “Dad” let the traumatized Lily sleep. I’d be embarrassed to tell you.  Let’s just say it’s my bed too and I wasn’t there to get a vote.

You’ll be glad to know that neither dog has suffered any ill effects (naturally it was Victoria Day and the vet was closed). Daisy and Lily would absolutely do the same thing in a heartbeat.  All luckily our sofas, chairs and bed had cuddly dog blankets on them, since washed with Nature's Miracle Skunk Odor Remover. The pooches had a second bath with that. They still are pretty aromatic and as a household though, we do really still reek.  You get a bit used to it, so I am really glad I have no meetings set up for the next few days. Victoria and I are off to an awards banquet on Friday (The Marsh Madness is nominated) and we may be doused in Febreeze.

Here are the girls, happily sleeping it off under my desk.  Gee, thanks. 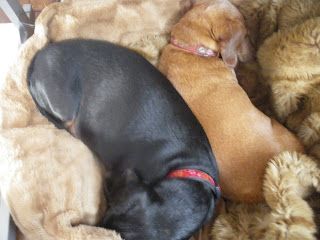 I have heard that spraying is not good for skunks and if you ask me, the little “Mouffette”  (French for skunk as skunk as now a bad word here) was the only innocent party in this whole fracas.

Why not come by and tell us your skunk successes and horror stories?  Sympathy for the skunk or “Dad” and dogs also accepted.
Posted by Mary Jane Maffini at 1:00 AM