Ode to a ham sandwich

One that sticks out happened outside of Albany when Mr. L and I stopped at a family restaurant and he ordered a liverwurst sandwich, and I ordered a ham and (Swiss) cheese sandwich and both of them came with THREE INCHES of meat each!!!  (Wow, those were two heck of a sandwiches!) 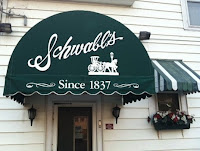 The other time was in Buffalo (on the entire other end of New York State) when Mr. L took me to Schwabl's -- where a guy at the bar not only hacked off huge slabs of ham off the bone, but also huge slabs of cheese.  (Accompanied by a very fine martini, there was nothing to complain about.)

The one good thing about a good old ham sandwich (no matter what type of bread it's made on), it's always GOOD.

But then there're a bunch of restaurants that seem to have a no ham-sandwich policy.

YES -- there's a bias against ham.  And it's not for religious reasons or anything like that.  Can you imagine going to a restaurant and the ONLY club sandwich they offer is turkey?  BLAND old TURKEY?  Arrrrrggggg!

Oh, yes. It's a conspiracy. And I first addressed it in my Jeff Resnick story, EYEWITNESS. Poor Jeff, in the middle of Manhattan can't get a lousy ham and cheese sandwich, DESPITE the fact the restaurant offers ham in other dishes. (Think chicken cordon bleu.) It's enough to drive a man to drink. Although, as I recall, he left his beer and stormed out of the restaurant. Hell hath no fury like a man denied his ham and cheese on rye!

I like lettuce, tomato. and mayo on my ham sandwiches (and some dill pickle slices on the side).

What's your favorite sandwich in the whole, wide word and how do you like it?
Posted by Lorraine Bartlett at 12:00 AM