How can I not love those spies?

I have been bewitched by a period of history I know little about: the Revolutionary War.  Up here in Canada, we learned British history and a smattering of Canadian history and some background about our province.  I loved history and ate it up, so I know I didn’t just ignore it.  For sure, the date 1776 was bandied about, but that was about it. 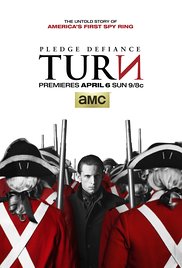 We have been watching documentaries about the Civil War and the Roosevelts and getting to know more about America’s past.  Then along came TURN (try to imagine a backwards “N” here).
This is the story of General George Washington’s spies during the long conflict that was the American Revolution.  As a mystery writer, I loved the idea of the uses of cryptography, invisible ink, and other ways of getting messages through undetected or if detected unbroken.  Who wouldn’t be fascinated by false pretences, deception and skulking around in the dark dodging redcoats?

The show focuses on the real life Long Islanders Abraham Woodhall,  Anna Strong, Caleb Brewster who made up the essence of the “Culper Ring”,  run by their long-term friend,  the admirable Benjamin Tallmadge.  Added to them was the Quaker, Robert Townsend, the most reluctant of spies, and then you really had a crew worth watching.  None of them were ‘professionals’, (except for Tallmadge who was a soldier). They were in it because they truly believed in the cause and aside from recovering expenses, eventually if they were lucky, they were not paid.  Being caught meant being summarily hanged so the stakes were high. The communities were divided between Patriots and Loyalists: with many on both sides not quite what they seemed.

We were hooked and remain so as the third season is now on.  Even better, the program was based on a book: Washington’s Spies, by Alexander Rose.  I borrowed the book from the library, couldn’t put it down and now will just have to go get a ‘keeper’.   The real stories are just as interesting and perhaps even more so. 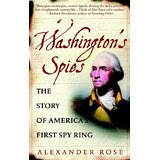 Part of the fun for us was watching the good and the bad on both sides:  we were fascinated by elegant and dashing Major John André, head of British Intelligence, also a real character. Some of the senior British officers, including General Cornwallis and the much detested Colonel Simcoe were sent north after the war ended, to foment a bit of trouble and civilize the north.  Simcoe, portrayed as a psychopath (boy did we hate him!) in the television show, was instrumental in the abolition of slavery in Canada and the implementation of trial by jury in Upper Canada. He has a lake, a university and a county named for him. Talk about mixed reviews!

History as they say is written by the victor and it depends on who is doing the writing where.

What about you?  Are you interested in historical drama based on real life?  If so, what era (s) do you find fascinating?  Do you like television or films based on books?  Lots to discuss on this topic.
Posted by Mary Jane Maffini at 12:00 AM