Tricia may not be the only one who's jinxed

A running gag in the Booktown Mystery series I write (as Lorna Barrett) is that the protagonist, Tricia Miles, is a jinx. She keeps finding dead bodies, and some bad luck, too, and the nickname has stuck.

My aunt and uncle are animal people.  For as long as I can remember, they have always adopted pets nobody wants--usually old dogs, cats, and in the past--and present--they have also sponsored retired racehorses. They donate monthly to Redwings Horse Sanctuary.  (You may already feel you know my aunt.  She's become a character in my Booktown Mysteries:  Michele Fowler.)

Having read just about every book Dick Francis wrote about horse racing, the idea of helping retired racing horses fascinated me.  We have a couple of race courses near where I live, and I know that the life of a horse who isn't in the running for the Kentucky Derby can be pretty miserable. That's why I so liked the idea of sponsoring horses who have worked hard and deserve a rest.

I recently got the Cracker Box Palace (Farm Animal Rescue and Sanctuary) newsletter (you can read it here). I've been donating to them for quite a few years now, watching as they started out as a small rescue entity, and growing until now they are able to do a lot more good work. Unfortunately, there are far too many animal cruelty cases in Wayne County, NY, but Cracker Box Palace always steps up and takes as many of the animals as they can. Not only do they have horses, but pigs, goats, chickens, rabbits and often end up taking in cats and dogs, too.

The last newsletter had pictures of a couple of older horses. Tuna and Buddy. When I saw Tuna's picture, it was love at first sight.  His owner had died and he and a bunch of cats and dogs ended up at Cracker Box Palace. I knew when I saw Tuna's picture that I had to sponsor him.  I was feeling flush that day (had just gotten paid my twice-yearly check from my publisher), so I decided to not only sponsor Tuna, but Buddy, too.

Tuna was 24 years old and had a heart murmur. I figured that because he was so old, maybe nobody would want to sponsor him. So I wrote the check and sent it off.  My family's cottage is just a few miles from the farm, so I figured I might buy a big bag of carrots and go visit my horses next month.

But I got a phone call from the director of the farm on Tuesday saying that Tuna had passed away on Saturday, which was a shock to all since he was doing well. He was gaining weight and had just had his hooves trimmed. It broke my heart to hear the news. They have a horsey graveyard and Tuna was buried there.  : (

Hearing this news got me to thinking. Am I like Tricia? Was my sponsoring poor Tuna  the kiss of death? (I sure hope not.)

Fortunately, Buddy is doing well, and they will transfer my sponsorship to another horse. His name is Amp and he's a retired racehorse. His windpipe collapsed and he could no longer race. (Horses are a lot more delicate than most people think.) Because of this, he can't "ney!" Cherie said it sounds funny when he tries. I am happy to help Amp have a happy retirement. Too many former race horses end up as horse meat in Japan. (I kid you not!)

So, now my job is to find a place that sells carrots in bulk. I will try to visit my horses next month, and when I do, I'll take pictures and share them with you.

Have you ever thought about sponsoring a horse?  Do you donate to animal rescue sites? 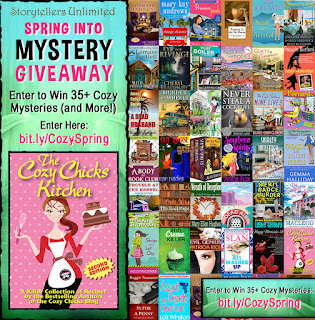 To celebrate spring, the Cozy Chicks have teamed up with Storytellers Unlimited and over 35 fantastic mystery authors to give two readers more than 35 cozy mysteries, and a Kindle Fire to one lucky winner!

We're giving away our book,  The Cozy Chicks Kitchen

Four of the Chicks are also participating.  They are:  Victoria Abbott, Lorraine Bartlett, Duffy Brown, and Mary Kennedy, and our books are shown below.

You won't want to miss this great giveaway!