KNIT TO BE TIED 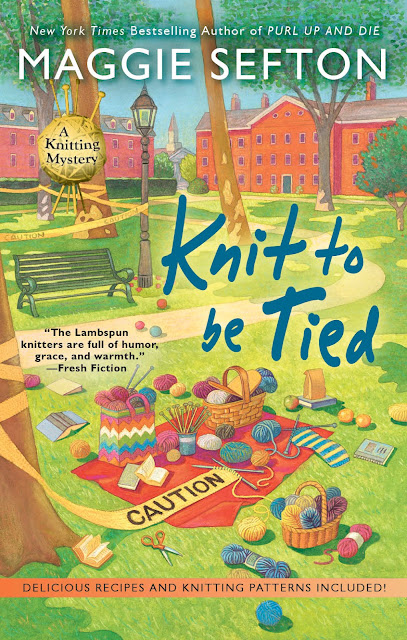 
As I've probably mentioned before, I'm currently writing Kelly Flynn #15 which is due in my editor's office by the end of June.  Right now, that book currently has no title.  But in six weeks time, Kelly Flynn #14 will be released in bookstores and in E-book format.   Title:  KNIT TO BE TIED.


The editorial staff came up with that title, and I love it.  :)  I've always been "title challenged."  Snappy titles or cute titles simply do not surface in my brain.  I have an active imagination to be sure.  But not with titles.  I did come up with the very first Kelly Flynn title---KNIT ONE, KILL TWO.  As some of you may know, that's a play on words using the old knitting term---"Knit one, Purl two."  Another of my favorite  suggestions came from a bookseller in Southern California:  FLEECE NAVIDAD.

But starting with the second Kelly Flynn book, I started receiving welcome assistance from fellow fiber workers and knitters at the Lambspun knitting shop in Fort Connor, Colorado.  And, as the series continued in popularity---I started asking friends and readers around the country (and world) for suggestions.  I even held a contest for titles once---years ago.  And it was fabulously successful.  I received SO many great title suggestions that I've been using them ever since--and giving full credit to the readers who suggested them in my  Acknowledgments page in every book.

Of course, I also received some really funny title suggestions as well.

Email ThisBlogThis!Share to TwitterShare to FacebookShare to Pinterest
Labels: KNIT TO BE TIED, Maggie Sefton