Since our winter snows have stopped this mid-February through mid-March, I thought I'd post some photos of previous snowy scenes around the area from former years.  Maybe it will stimulate the Snow Gods to show up.

I know this sounds weird to those of you who live in Northern climes where it's cold and snowy during each Winter, but I would absolutely LOVE to see a lovely, cold, wintery week of Winter.  Some winters here in Northern Colorado do have lots of snow, but not this winter.


One of my neighboring streets after a snowstorm  a few years ago. 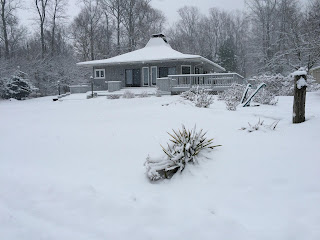 Yes, we did have snowy weather and several days when snow blanketed Northern Colorado and other areas of the state.  But that was in mid-November and during December.  A little
snow again in January, but then it stopped here in Northern Colorado.

The snowy river house in Virginia

Of course, our mountainous higher altitude areas of Colorado and the Rocky Mountains never lacked for   snow.  They had their usual beautiful and deep snowfalls.  Since Colorado's ski resorts are located in those higher reaches----usually above 10,000 feet altitudes---that is great news for them. But in 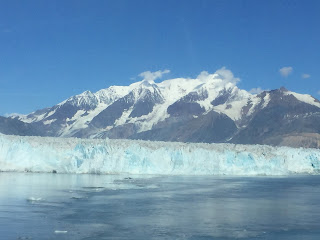 Northern Colorado and Denver areas, we are approximately 5000 to 6000 feet altitude, and starting in mid-February, our snowfalls didn't show up.  Sometimes we have snowy winters, other times snowstorms go visit other locations.  I've seen all sorts of descriptions and reasonable explanations for global weather patterns each year, and it is fascinating.

I couldn't resist inserting a photo of one of those beautiful glaciers I saw last August on the Alaska Glacier Inside Passage cruise.

For Denver and Northern Colorado, this mid-February through mid-March has been snowless (not sure if that's a word. Of course, there is one thing that is definitely true about our weather here in Northern Colorado and that is----Anything can happen.  Our Spring seasons are totally unpredictable.  And, believe it or not----every year is different.   How are your Springtimes where you live?    Do you have a lot of snow?   Yes, Mary Jane, I can hear you laughing all the way from Canada.   :)
Posted by Maggie Sefton at 12:00 AM