Sadly, my brother and I lost our mother last June. Since then, we've been working to liquidate her estate. I'm the executor (actually, executrix), but my brother took on the task of selling off the bigger stuff in her estate. It was good luck for us (but not for him) that he had to have surgery over the summer, which kept him on disability for over six months while he healed. We (well, I) had a number of garage sales (seven, to be exact) but he took on the task of taking pictures and writing descriptions to put the bigger items on Craigslist.

I thought he was just being crabby.

And then he went back to work and could no longer deal with these iffy people. Now it's me who has to deal with them.  Because, let's face it--a writer DOESN'T HAVE A REAL JOB and should be AVAILABLE 24/7 because ... hey, writing isn't work, right?

But that's not my brother's fault. He DOES have to show up at his (two) jobs and I'm here sitting in my office with two cats sitting behind me by my little heater while I tap out the latest adventures of Jeff Resnick and Tricia Miles. 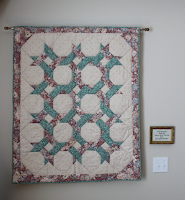 So ... a week ago, a book dealer contacted us wanting to look at my mother's books. The ad says we have QUILTING books (because my mother was a superb quilter and could do just about anything in the sewing/knitting arts).  But this book dealer's REAL interest is cookbooks--most of them went to the local Friends of the Library (and I only recently found out, thanks to paperwork she kept, that my mother was a founding member of that organization).

My brother has to work his two jobs, so I said I would meet the guy, who DESPERATELY wanted to see the books yesterday.  Except ... he never called. me. I changed my plans for the day because he MIGHT call.  But then he didn't.

Mr. L and I go out to lunch on either Wednesdays or Fridays.  We didn't go Wednesday, so today is it.

Mr. I-WANT-THOSE-BOOKS has not yet called.

Should he call later today--sorry buddy, but you're out of luck.  I ain't giving up lunch with Mr. L for you who may or may not show up.

Sadly, I now understand my brother's frustration. He's skeptical of EVERYBODY who says they want to check my mother's suff out.  And now so am I.

I keep thinking ot that song, "Why ya gotta be so rude?"

Yeah, Craigslist people.  Why ya gotta be so rude?

Have you ever run into this phenomenon?
Posted by Lorraine Bartlett at 12:00 AM