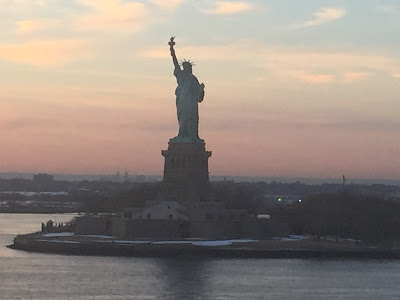 
Lady Liberty as we cruised away from the New York City Cruise Terminal.  First time I've left from that terminal


Yes, I've escaped again.  Winter Weather, that is.  For those of you readers and Web followers, you may have thought I meant an institution of some sort.  Face it, you always suspected some of the Chicks were a bit strange.  Well, I'll plead guilty.  Actually, I'm a whole lot "strange."  So are some of my fellow Chicks if the truth be told.  But I'm not squealing. 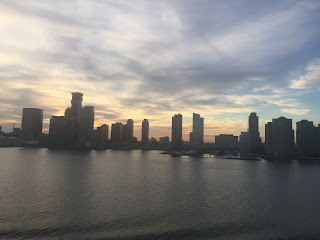 I've escaped onto a cruise ship again.  Yes, ever since fellow Chick Lorraine Bartlett went cruising and wrote a whole lot while off to sea, I've tried to cruise every two years or  whenever I can save some "cruise cash."  And as a former C.P.A., I'm really good at "squirreling" away money. 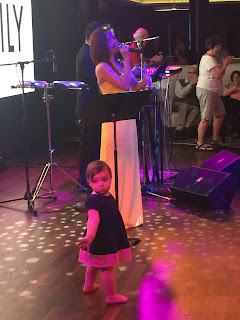 So. . .this time I'm off on a 14 day cruise into the Caribbean.  I've cruised the Caribbean before for my first cruise in 2013.  This time I found a great end-of-year sale, and I'm going to islands that I've never seen before or if I have, we're going to different ports and areas of those islands.  I'll keep all of you up-to-date on the Cozy Chicks Blog and on my Facebook website in addition to our Cozy Chicks Facebook site.

An adorable little toddler who clearly has a musical bent.  She was out on the dance floor moving to the music.  What a cutie!

I boarded the Norwegian Breakaway on Sunday afternoon and that evening we headed out to sea.  Our first port will be Puerto Rico.  I've been to Puerto Rico before and toured there and enjoyed it very much.  This time, I am relaxing on board.  Really.  Last year was a very hectic and stressful year, and it caused me to turn in Kelly Flynn #14 late in the year.  (Yes, that's right.  The 14th Kelly Flynn Mysteries novel.  Thank you, thank you, Readers for your support and for loving Kelly. . . as much as I do).  So, I'm taking this time to relax and renew. . . and start Kelly Flynn #15.  After Puerto Rico, we'll sail to St. Thomas.

For now. . .I will update you these next few days on Facebook and again next week on our Cozy Chicks website and blog with details of what I'm doing. . . even if I'm simply relaxing.  Ahhhhhhhhhhh.  :)