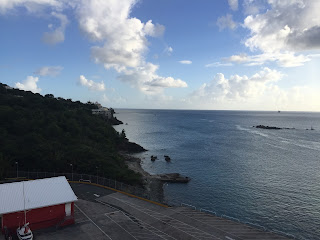 
St. Thomas, U.S. Virgin Islands.  The building to the left is Senor Frog's restaurant, bar, and gift shop which all things "froggy" are available to wear and buy as well as drink.

Hey, there, Everyone!  I'm presently on a 14-day cruise somewhere in the West Indies in the Caribbean roughly between Barbados and Martinique.  Our Norwegian cruise liner  Breakaway spent most of today in the port of Bridgetown, Barbados which was a British colony for roughly 300 years.  It was heavily fortified because the British valued its geographical location highly.  Plus, it's main crop was sugar cane.  Other European nations---which had colonies of their own, like the Dutch, the French, and the Spanish---tried unsuccessfully to attack Barbados over those 300 years. 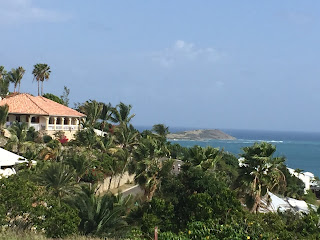 
Today, a great many of the passengers joined tours of the island.  My tour visited the coastal areas along the South side of Barbados.  Absolutely gorgeous white sand beaches and lots of homes.  Some simple, others very fancy.  Many properties are condo units that people either buy or rent as they visit the island.  Then we visited a 300 year old plantation house where sugar cane was grown and harvested by the African slaves the Europeans brought to the island.  You cannot escape all the history of these fascinating islands. 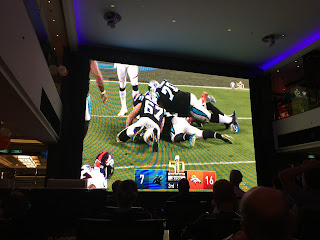 
The various islands we've visited so far include Puerto Rico (which I'd visited 3 years
ago and toured);  St. Thomas, U.S. Virgin Islands;  Tortola, British Virgin Islands; The French and Dutch colony Saint Maarten (one half French, one half Dutch);  former French colony Dominica;  and today, Barbados.  Tomorrow is  the French colony Martinique;  then the next day, Antigua.  After that come three full days at sea (always my favorite) then we arrive back in New York City Port Terminal on Sunday morning.

I just love being "out to Sea."  No land  in sight, just a vast expanse of Ocean for as far as you can see.  I think I must have spent some time in a former life as a Mariner.  :)  Anyway----here are some photos.  A couple photos are of the large Atrium area in the middle of the ship where a great many passengers watched the Super Bowl Football Championship Game yesterday evening.  Since I live in Colorado and am very proud of our sports teams, I claimed a comfy chair early in the evening and cheered on the Denver Broncos.  And---as most of you know----the Broncos won!  Yay!!  So there was much celebration going on.  Half the people in that large Atrium area were Carolina Panthers fans and the other half were cheering the Denver Broncos.  But everyone was a good sport and enjoyed the Game.

I hope you enjoy the photos.  I'll update everyone and share more photos next week.  Enjoy!  :)
Posted by Maggie Sefton at 12:07 AM