Wednesday night, we lost our girl. Her name was Betsy, and Mr. L and I adopted her and her sister Bonnnie nineteen years ago.  (In fact, we had our girl Betsy-Betts for nineteen years, one week, and one day. We lost Bonnie four years ago.) 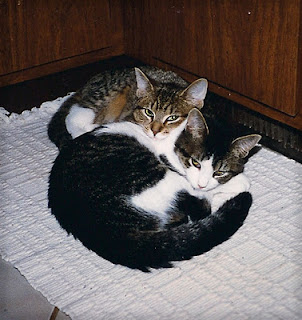 Betsy was the runt of the litter. You could tell because she was small, and her back legs weren't quite right. At some point, she suffered a broken tail. But that little girl was a fighter! (That's baby Betsy in front by one of her favorite spots by the heat run in the kitchen.)  We had gone to the (kill) shelter to get a tabby, but these sisters were just so cute that we ended up bringing them both home. (They were four months old at the time.) They were our kittens. (In fact, up until we lost her, we called our girl Kitten.)

We had three cats at the time, but the kittens moved right in and captured our hearts. Not only our hearts, but the heart of Mr. L's cat, Larry. Larry disciplined the girls when they stepped out of line, and they loved to snuggle close to him. They looked at him with adoring eyes. He looked out for all the girls. 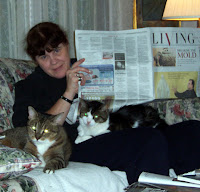 The girls were inseparable when they were younger, but as they got older, they sort of just tolerated each other. Still, come Happy Hour, I'd have them both with me. Usually Betsy on my lap, and Bonnie beside me. (All our cats have always been lap cats. We love it, but it makes it hard when you need a new drink, or nature calls and you don't want to disturb them.)

We had a terrible scare with Betsy about ten years ago. She wasn't being Betsy and was losing weight. A blood test confirmed she had lymphoma. We were skeptical when our vet said, "I can cure her." 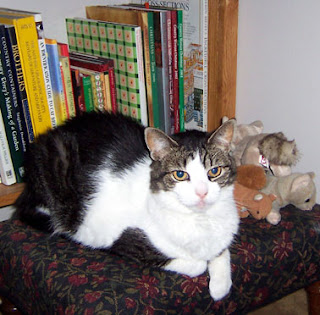 We went through bi-weekly chemo with her over the summer and it was touch-and-go. She lost all her whiskers and looked incredibly young without them. At one point, the vet wanted to try one last-ditch effort. She ordered a HUGE cancer-fighting pill. It was so big, we had to take Betsy to the vet because we knew we couldn't give it to her. I had a signing out of town that weekend (my first book!) and the town was closer to our cottage than home, so we took Betsy with us (she was a great little traveler). She was so sick after that big pill and lay on the bed and didn't move for two days. We made the unhappy decision to take her to the vet on the Monday to be euthanized. I cried the entire weekend. We brought her home and she was deathly ill.  We were going to call the vet first thing on Monday morning.

Monday came and Betsy staggered into the kitchen with the other cats for breakfast. She wasn't well, but she was able to eat and was better than the day before. And the next day, she was better still.  Within a week, our girl was back to being our girl. I can't tell you how happy we were to have our Betsy-Betts back. 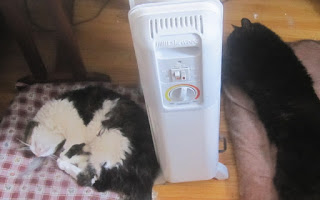 Getting old sucks. But Betsy aged with grace. Until a year ago, she (and the other two boys) slept with us.  Even a king-sized bed can seem crowded with the five of us in it. But then she couldn't jump up on the bed any longer (and I couldn't seem to teach her that she could jump on a box next to the bed and get up that way, although the boys took to it like a fish to water), so she came to live in my office full time. It's the farthest away from the furnace, and kind of cold, so I installed a little heater, and Betsy was very happy sleeping on her little checked cushion. (That's Chester on the other side. He likes the heater, too.) 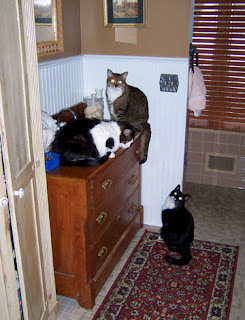 She used to jump onto the bathroom vanity to get a drink (we always left the sink dripping for the sisters). When she could no longer jump up, we installed a water bowl. Betsy liked fresh water. Often she'd ask me to change the water, and then I'd find out that she'd just begged Mr. L to change it. So sometimes she'd get fresh water five or ten times a day. (She had us wrapped around her little paw.)  She had a hyperactive thyroid and was on meds (a cream we put in her ears) and she was a real trooper. She always let me give it to her--or my Mum, and even my brother last fall when he took care of the cats when we went to a writers conference in Florida.

Betsy came to work with me every day and liked to come an sit on my lap every hour or so for five or ten minutes, and I never tired of turning around to see her on her little pillow, snoozing. It made my work day a lot happier. 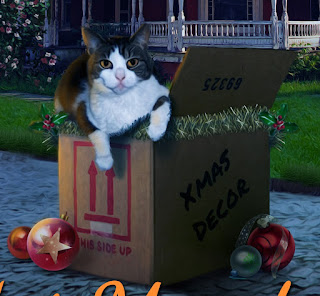 I had the rights to my Victoria Square Mysteries for a dozen or so countries, and decided to self publish them. Betsy played Mason in the books, and Bonnie played Della. I knew who to put on the covers, too (Betsy is on all three plus the cookbook).

These last few weeks, Betsy was rather tipsy. Her back legs would slide out from under her on our slippery ceramic kitchen floor. But she was still eating, still showing up for kitty snacks at Happy Hour. She even came to sit on my lap, as usual (although she didn't stay for very long).

Wednesday our Kitten was frail, and we knew we were facing losing her, but we still felt we had a week or so. She showed up for breakfast, although she only licked a little of the gravy. She demanded water, and even tried to jump in the bathtub. She went back and forth between my office and the laundry room where the litter boxes are. I gave her her medicine at 5 pm as usual, and as usual she let me. She didn't come out for Happy Hour, but she did come into the kitchen around 7 pm to sit in front of the heat run--just as she'd done most of her life. She was sleeping at 7:30 when Mr. L went in the kitchen, but by 8 pm when we both went in to check on her, she was gone. 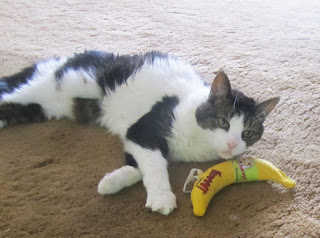 She saved us from having to take her to the vet one last time, but she broke our hearts anyway.

That's the thing. Whenever you get a pet, you fall in love at first sight knowing some day they're going to break your heart by leaving you.

Our hearts are broken.

Have you had a special pet that ripped a hole in your heart--or are you like me, have many holes from the loss of a furry friend?