What's the worst that could happen?

In writing, 'what's the worst that could happen?' is a useful plotting tool for the author. In real life, not so much. So last week, we had record rainfall after a heavy snowfall, temperatures well over freezing and a power outage in January: what could go wrong with that?


If you said my finished basement could flood, you would be right on.  Just as we were relaxing and    curled up waiting to see the latest Downton Abby on PBS, the lights flickered ominously three or four times and went out.

No biggie, we said, and lit a few candles in hurricane lamps.

The power company estimated two hours before service would be restored.  Again, no biggie. The house was warm and dry and we could chat or nap. With luck, we’d see the episode before midnight.
Eleven came and went and the moment we dread arrived.  Water started to rise in what we call ‘the pump room’. The pump room is that hideous little space where the sump pump works to keep water out of the basement.  It is powered by electricity.


Time to start bailing!  How long could that  power be off?   No pix here. I never want to see another bucket again!

Each call to the power company resulted in a later estimate.  Never mind. Bail! Bail! Bail!  I became the bailer.  I was glad I’d been lifting weights.  The Hubster would take the buckets upstairs and toss them out.   He must have hauled a hundred buckets. Meanwhile we filled huge storage buckets with water, but as the hours rolled on and the temperature rose, the water came in faster and faster.

By two forty five. we had lost count of buckets and the water had reached the top of the sump pump opening. It didn’t matter how fast we bailed, the water was faster.  Soon it crested and began a slow creep along the floor of the pump room and toward the finished part of the basement. Bail! Bail! Bail!  Too little, too late.

The water reached the carpeted area at three a.m.  It had also begun to seep in other directions toward other rooms.  Perhaps I should mention that our basement is finished, with an area to relax and watch TV and space for guests, plus two office areas, but as I may have said, it is furnished mostly in books. Thousands of them. 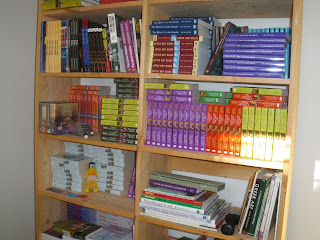 While I bailed and filled more large containers to try to slow the spread, my husband raced from bookcase to bookcase taking everything on the bottom shelves and stacking the books, papers, files on tables, chairs, and desks.  Where he could, he took the actually wooden shelf as well.  He worked in the direction of the water spread and at high speed.  We lifted up chairs and anything with a wood bottom or legs. Computers, printers and other equipment were unplugged and plunked somewhere safer.

This was all in relative darkness with flickering (and formerly romantic) hurricane lamps.  At some point there was a lively discussion as to why we didn’t have a battery back-up pump and a generator.  Why indeed?

Just as the water reached across the first room and started to spread into the  furnace room, the lights came on.  Three thirty a.m.

We looked around at chaos.  Water had crept around the perimeter of one side of the basement and reached walls behind the bookcases.  In the two bedroom areas, we lifted bed skirts and moved chairs.
We knew then we were too late to save the carpet and some of the walls.  We didn’t lose a single book though, although some of the book cases are goners.

In the morning, a crew sent by the insurance company arrived, a bit later than I would have expected.  Apparently, we were not the only ones and we weren’t the worst by a long shot. We had something to be thankful for.  Their first job was to pack and label books and stack them in a dry part of the basement. Good thing there was some space where the water hadn't reached.  These boxes represent about half the books.  All those that were still in a dry place will need to be moved to change the floor. 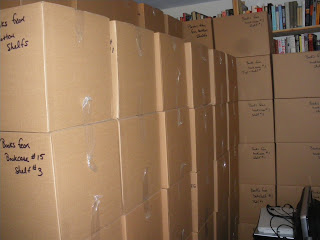 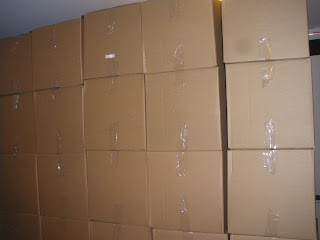 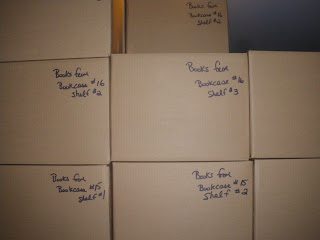 Their second job was to cut out the affected carpet and then to cut out any drywall that the water had reached.

I don’t envy them their job.  It’s a tough one and they are dealing with very stressed people as a rule.  Because we hadn’t lost a single book or picture, or even a piece of equipment, we were pretty agreeable. In fact, we’d always hated that carpet which had been installed just before we put in an offer on this house.  Of course, we didn't hate it enough to change it.

Finally, giant dehumidifiers and blowers to brought in the make sure it all dried out. 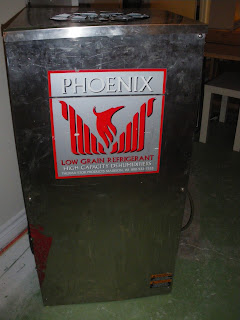 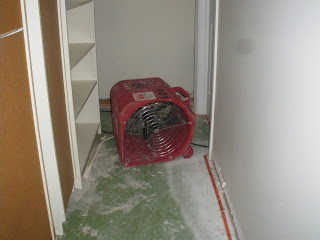 No one was hurt. We were home and were able to limit the damage by bailing and hauling water out. Our house is still standing, we have other areas that we can work in and we know that many people are not lucky enough to say that.
That’s the good news.

The bad news is that we will now go though a few months getting our place back to normal, there will be hammers and saws and nail guns and workers and the thump of boots. Those are rarely a writer’s favorite sounds.  Everything will have to be packed and moved, once to fix walls and replace flooring and then back again.

The other good news is that we now have a generator, in case Mother Nature decides to ‘bring it on’ again. It’s a big sucker and it’s now rigged up so that it will be easy to switch to it if we have to, although first it will need to be wheeled out of the porch and away from the house.  Exhaust from generators has been fatal more than once around this area, especially during the eight to ten days of power outage during the ice storm o 1998.

There’s a lot to be thankful for. I like the generator. It’s a Champion and it has a heroic aspect to it. I think I’ll name it.  Max?  Thor?  Godzilla? If you have a suggestion for a name, I’d love to hear it.

Next we’ll pick up a pump with a back-up battery. Soon (although not nearly soon enough) we will have new floors and repaired walls in our basement.

Eventually we’ll get back to normal.  You’ve seen some of the ‘before’ photos. Would you like to see the afters when the time comes?

And now, how about you? Have you had a flood to contend with?  How did you manage? I hope you were able to recover!
Posted by Mary Jane Maffini at 12:00 AM