LEADER OF THE PACK, ER, FLOCK 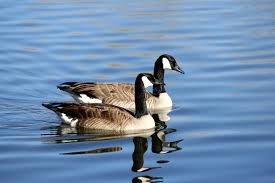 I’ve been sitting at my desk watching the geese in the pond behind my house (yes, instead of writing) (and if you want to see visible proof of my perfidy, watch the short video on my website called, “3 Rules of Writing the Novel.”)

Anywho, I noticed something fascinating about the geese’s group dynamics as I watched twenty of them napping in the sun on the northern bank. Two big birds were on guard duty near the water’s edge, and one big fellow in the center stood tall and gazed around, while the others curled their heads to rest on their backs. (Neck brace, anyone?)

Suddenly, one goose towards the back made a dash for the water, almost as though afraid he would be stopped. He seemed to take the guards by surprise as they quickly did a sidestep. No one else in the flock made a move, and the lone ranger floated away until he was about ten feet offshore. Then he turned around to face them and honked, as though saying, “Come on in. The water’s nice!”

Some looked around at him, others ignored him, but one brave soul started toward the water only to have the big goose in the center put his head down and make threatening noises to drive the wayward bird back to his original spot.  Once back, the poor bird stood there swaying indecisively, as though weighing his escape options, then he gave up and settled down to sleep.

I saw such corollaries with us humans. There are usually one or two leaders who keep the group under control with their security force and through intimidation. There is always a rebel who defies the authority to strike out on his own, and there are a few who want to join the rebellion but never quite gather the courage to make the break.

The lone goose eventually met up with another lone goose from another flock on the opposite side of the pond and the two floated up and down gathering a few more singles until they had their own small flock. Now they are at the water’s edge eating contentedly with their new found family.

My point of the comparison is that in politics and government, maybe we’re just creatures of instinct like the birds. Thoughts?

(And remember, FLORIST GRUMP will be released tomorrow, October 27th!!)

I am glad you enjoy watching the geese Kate, I love watching birds myself now and then :)