Nurses United and it was Awesome!

About two weeks ago, I was watching a daytime TV show and was pretty offended by two of the hosts on The View. I had only started watching the show again because I thought it would be better than it has been in several years. Let's just say I've been wrong a lot in my life. This was no exception.

This all started out with a piece they were doing on the Miss America Pageant. May I first say that I am not a fan of women being forced to have their bodies ogled by a panel of "judges" these days. I wasn't as enlightened as a girl. I used to love it. The saving grace of this pageant is that there are scholarships involved. It's not a "Trump" thing and that's even more appealing. So what do the women of The View have to go and do? Make fun of a bright, articulate young woman whose talent was to talk about being a nurse and what it meant to her.

Never make an old nurse mad. Never make young nurses mad. Never, ever make nurses all over the world mad. For the most part, we are quiet about what we do--or in my case what I did, as I am retired. The comments that drew the ire of this group of dedicated, educated, compassionate professionals? #1 is that the nurse contestant wore a "costume" on stage (her scrubs) and #2 that she was wearing "a doctor's stethoscope" around her neck and they wondered why. 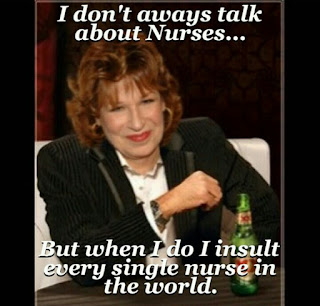 I was invited the next day to join a facebook group called "show me your stethoscope." At the time I joined, there were more than 300K members already. As of right now, that number is about 818K. I do believe they poked the bear. If you go to that particular facebook page you will read some amazing and articulate stuff from nurses and many other health professionals. Sponsors were lost for that show and what seemed to me to be half-hearted apologies were given. Meanwhile, over on the Ellen Show, before all this went nuts on social media, Ellen had the nurse contestant, Miss Colorado, on HER show. She praised her and added another 10K to the money Miss Colorado already won so she could go on to graduate school. Nice. But nicer than that, for me, was to see nurses unite and speak up for their profession. Nurses roared!

I've always believed in a couple things--one of them being that you will see a cow every day in your life in one form or another. (I know. Random, but true). The other is that one day you will be cared for by a nurse. You will see him or her for far more minutes, hours or days than you will ever see a doctor. Nurses are just as smart and do a far different job than doctors. It would take too long to explain the differences, but there are many. And that nurse who will help you through what might be the darkest moments in your life will have her own stethoscope--probably the 6th one she's bought since doctors believe ours are free for the taking! 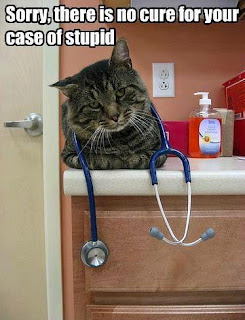 Nurses are great! No matter how caring your doctor is, and I happen to have a female doctor who still delivers babies and takes care of her patients until the grave, you still always see much more of the nurses. If I call the doctor's office, I always expect to talk to one of the nurses initially even if the doctor ends up being consulted. Shame on the women of The View! By the way Leann, what did you think of Blind Spot? It does seem intriguing. Cordella

Thank you for this beautiful tribute to nurses. My cousin went back to school at 55 to become a nurse which she believed was her calling. She is now a top cancer ward nurse and getting her masters in nursing. I have the utmost respect for al nurses. I believe all nurses deserve respect and was appalled at the view as the rest of the world.

I loved it! But Limitless was my favorite new show. Awesome!

Thanks, from another retired R.N.

Well said, Leann! I have the greatest respect for nurses. In my opinion, they are the "worker bees" in healthcare.

I quit watching the View years ago because of Joy Bahar. Ugh. Nurses are the best. They have kept me alive a couple of times when I should have been gone. Nursing is a hard job. They have to put up with a lot.

Thanks so much, Pat.

Thanks Patsy. Not a glamorous job, for sure. But nurses matter.

I'm just a nurse, but what's the difference between a Drs stethoscope & a nurses? Funny how someone that sits & chats AND gets paid, has so little knowledge of what she's chatting about. I'm an operating room nurse & id love for her to work just half my shift & I'll sit & chat about comedians. Wonder who caves in first? Pretty sure it wouldn't be me because I'd be sitting for a change instead of standing in 1 spot for hours on end some days. She needs to shut up or put up!

I'm not a nurse. I'm a big fan of nurses! Nurses listen and pay attention. They notice small things that matter and help keep up patient morale which, I believe, is a great part of anyone's health. Nurses work hard and carefully under stressful conditions. Some humors are senseless, that's for sure!
Zena

Karma! One day the women of The View will need a nurse to take card of them. You can bet the nurse will not be making fun of them. The nurse will act professionally and give that woman from The View the best card she/he can.

Very good blog Leann. When my father had his leg amputated, it was his nurses that kept pushing to get him the care he needed when several doctors sort of dropped the ball (possibly thinking another was handling it). They never gave up and were the ones who kept us all going through a tough time.

And my grandniece's husband is working on getting his nurses license. He started by getting a massage therapist license (he would like to work in assisted living/rehab). Then, he and his family sacrificed so he could quit a job going nowhere to take a course to become an LVN. It has been hard on all of them (they moved in with family temporarily). He has missed a lot of sleep and often lives on caffeine. He sometimes comes to my house where he can study in quiet (my great grandniece is 2, so it's not quiet at home). The amount of data he has to learn is daunting. His "lab" has been working a couple of days a week in a care facility, taking care of residents. Not only do nurses have to learn and remember an incredible amounts of information, but they know that an error on their part (like when dispensing meds) could be life threating. Once he has his LVN and can get a position, he will pursue an RN license while working. This is not a career for the faint of heart. Nurses are intelligent, caring, strong people. And BTW, some of the first things I bought for him when he started his course were scrubs and a stethoscope - required equipment for all nurses.

I went to trading school to be a medical administrative assistant. I knew I could not be a medical assistant as I do not have it in me to be the "nurse" type person. I would rather be behind the scenes doing the paperwork, billing, and making the schedules. My point is we had to learn to use a stethoscope and we even got one. So I guess I did not understand what was the point of making "fun" of the nurse with a stethoscope around her neck. A doctor will not always be around, its more likely a nurse will. So if I had to learn to use a stethoscope, I can definitely see a nurse needing one.

Amen, Leann. Nurses are the ones who will be with you, checking you, overseeing thru whatever is happening. Doctors diagnose. Nurses and physical therapists are the real "healers." In my not-so-humble opinion. :)

I'm also a retired nurse. My shifts started when I walked thru the unit door until I was finished. You noticed I didn't say 8 or 12 hours later. My husband lost track of the number of times I would walk thru the door and 10 minutes later get called back in and not because I was on call, but they were delivering another set of 30 week twins and they need me because I could care for babies on ventilators. Or I missed dinner with friends because I'm in an emergency c/section. I wouldn't have done it any differently if I could replay my career. I spent almost half of my career on the night shift waiting for a day slot and paid for every stephoscope I owned. Nursing isn't a glamorous job like being on TV, but it is the most rewarding career and I hope I made a difference.

That is very true, Annette. Being highly trained professionals is something nurses take very seriously. They don't care who you are or what you say. You will still get the best care they can offer. Having been kicked, bitten, had my hair pulled so hard it took me to the ground, hit over the head ... well, you get the picture! LOL.

Thanks Lynda. Good for him. It is not for the feint of heart, no matter what area of nursing he end up in. But I know he will do a great job!

You cannot be around sick people without a stethoscope! And I rarely met a doctor who had one with him when s/he needed it! I lost quite a few to them over the years! :-)

Thanks Maggie. Like I said, the jobs are very different. A guest who was on the show later went on a talk radio show and said the View Crew was complaining about having to apologize and that nurses were "wannabe doctors." Not so. But then, they had no idea what they were talking about in the first place. Sigh.

You absolutely did! There isn't a nurse I know who hasn't saved at least one life--but you won't hear them talk about it. They just don't. :-) Congrats on a great career!

Where did the facebook page "show me your stethoscope" go?