MUM’S THE WORD – The TV Movie! 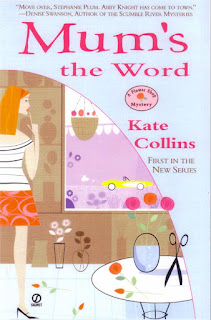 
Imagine opening up an email one Sunday afternoon and seeing this: “I’d like to talk to you about turning your delightful mysteries into TV movies. Here’s my cell phone number. Please call me ASAP.”

What would your first reaction be? Shock? Mine was skepticism. Was it a prank? A phishing scheme? A cruel joke?

My assistant, Jason, did some quick research and found out that the person was indeed a well known producer of movies and TV shows. Still a bit leery, I thought, “What the heck? It can’t hurt to talk to him.” So I called, right then on that sunny Sunday afternoon.

And talk we did, for forty-five minutes. What a pleasant man, too, and so enthusiastic. He was in the process of downloading some of my books to read. He had heard about them from his staff. When he’d asked them for a suggestion for a mystery TV movie, they had pointed him toward the Flower Shop Mysteries.

After we ended our conversation, I sat at my desk in a state of disbelief. Had that really  happened? After all, I’d been dreaming about seeing my characters come to life since book #5.  Had the Universe heard my wishes?

As I walked into the living room, a feeling of immense joy overcame me. I wanted so much for my husband and parents to be there to share in the wonderful news. And then my land line started to chirp, short little rings, for several seconds. No one was there, of course. I know it was my loved ones letting me know how happy they were, too.

But then the doubts started to flood in.  Was the man really serious? Was it all talk? I decided to write to my agent and give her the info so she could contact the producer, as I’d promised him, and there in my inbox were two emails from him.  Now I had solid evidence, as Abby Knight would say, that I hadn’t imagined the whole thing.

Since then, I I’ve signed a contract optioning the first book in the series, MUM’S THE WORD, seen a first draft of the script, and been invited to the set.  Production is tentatively set to start in mid-October. And I’m still pinching myself every day.

I am so grateful for this opportunity to bring my words and characters to life.  But as with any project made from a book, changes have to be made to fit the plot into the time they have. Not all of my secondary characters will be in the final version but the plot is exactly as I wrote it, with all the twists and turns.

I know how attached readers can be to their favorite characters, so you can imagine how the author feels to have some characters cut or their appearance/age altered. I’m sure Margaret Mitchell had some thoughts about some of the actors who ended up in the movie. To me, the actor who portrayed Ashley never seemed to match the character in the book. But I’ll bet Margaret was still beyond thrilled to see her book come to life on that big screen. Imagine her excitement when she learned that Clark Gable was starring!  I can tell you that a well-known actress is attached to my project, but I’ll have to wait to find out who that is. And who, I wonder, will play Marco?

No matter what changes are made to MUM’S THE WORD, the plot is all mine, the characters and ideas are mine – and the thrill is all of ours. I hope you’ll share in the joy with me.

As the deal firms up, I will get more information and will post it on Facebook. So stay tuned!

Kate, I am so Happy for you!!! I love your books, especially since I am originally from Indiana and have worked as a florist. Your books are right up my alley. As one of your many fans I cannot wait to see "Mum's The Word" on screen!!!!!

WOW!!! How exciting for you! How have you been able to keep this to yourself? Any idea what network it will be on and how soon we can expect to see it? Cordella

Fantastic news, Kate! I'm so happy for you. :) Keep us posted.

Thanks, Janean! I can't wait either! I love that you were a florist. You can so identify with Abby's struggles.

The Flower Shop crew is so charming, and such fun; I really look forward to seeing it come to life. As for you, Missy, you deserve this wonderful gift. Huzzah!

I've had to keep it under wraps until I knew it was a sure thing. As soon as I had a signed contract, I could tell. But until more details become firmed up, that's all I can say. I think it will be on in the spring -- I THINK. Fingers crossed!

Thank you, dear. I can't wait to see real actors speaking lines I wrote. It's beyond thrilling. It's a dream.

I am so excited for you! I have always wanted to see some of my favorite series become a movie or a TV series. I have read them all up to date and it will be exciting to see who stars in it. It will be fun to follow you through this experience.

This is wonderful news. I'm so happy for you and for us. LOL I can't wait to see who they will cast and also to see it. Just don't let them change it too much. It's a great series.

Hooray!!! Can't wait to see how it turns out. So proud of all your accomplishments!

That is so amazing and awesome Kate!! I am truly thrilled for you and can't wait to watch this when it comes out. I loved Mum's The Word.

That's just the best news! All of your hard work spent on dreaming, plotting and inventing characters who come to life on the page and in our hearts and minds has paid off through your books and now this. Congratulations for making the world a brighter place.

Thanks, Jeannie. I will be keeping everyone updated as I get more info.

I'll try, Diane, but as I wrote above, once someone buys the rights, they change it to fit their needs and their targeted audience. Things will change, but not the most important things.

What beautiful sentiments, Naomi. Thank you!

I am so thrilled about this!! Congratulations!!!

Congratulations! So happy to hear your good news and so excited that I'll be able to "watch" your books also.

Congrats Kate!! How wonderful for you.

Congratulations -- dreams DO come true! And I love that your land line chirped at just that moment!

So excited for you - congratulations. Looking forward to more info when you can "clue" us in.

Kate, I am so very happy for you. I won a copy of Mum's The Word from you when it first came out. I remember you saying that your husband remarked on my name. This is a well-deserved accomplishment for you. Congratulations!

I am VERY happy for you!! Speaking as a fan, I can say we are very excited to share this experience with you through your posts and this blog! I so wish your husband and parents were here , but just know that you have many fans that are honored to know the series and what the future holds for them!! Congratulations Kate!!

This is great for you and for the viewing public! Some of the TV selections don't appeal to me and this seems different and fun. Yay!

I am thrilled for you and overjoyed for all of us readers. I have been reading this series ever since the very first book. I have read every book. I can not wait to see a real live Abbey and Marco and of coarse cousin Jillian.

Wonderful news! Enjoy and take pride in the work you created.

Kate, so happy for you. I have read every one of the books in the series. I think they were the first "cozy mysteries" I read. Thank you for creating some great characters especially Jillian and Abby's mom.

This is so exciting!!!

So totally amazing for you! Your landline ringing was most definitely your angels giving their seal of approval. So happy for you!

So totally amazing for you! Your landline ringing was most definitely your angels giving their seal of approval. So happy for you!

That is such awesome news. And we can say "I knew her when..." LOL I don't have TV service. I got rid of it a dozen years ago because of finances and then decided that I prefer reading or crafting to watching TV. But I will definitely have someone tape it for me when it comes out. Best of Luck!

I hadn't thought of it that way. Thanks, Melanie.

Thanks, Leslie. Yes they do come true. We need to dream more!

Thanks, Jeanine. I never dreamed the series would go this far -- 19 books and hopefully more! But I did dream about it becoming a TV series. So this is pretty darn close.

Thanks, Kim. I do believe my husband and parents are celebrating with me.

From your lips to God's ear, Cathy.

Thank you, Sharon! I'm honored to be the one who introduced you to the cozies.

I totally believe that. It has chirped on a few other momentous occasions, too, so I know it's something special.

Thanks, Lynda. I doubt I'll be famous, but hopefully my books will gain a lot more readers because of this. I'm all for that! And hey, if I get to do a walk on part, I wouldn't say no. LOL

TOO COOL!!!!! Wow that is so exciting and I am so happy for you. I can't wait to see the finished product and I know I will enjoy it. I just hope you can stop pinching yourself now (LOL.) And you can just go on basking in the glow as long as you like, you earned it!!

Thank you, everyone, for your kind comments and wishes. I'll keep you posted as I get news on production/actors, etc. I think I can stop pinching myself now!

Congratulations! I will be on the lookout for more info!!

How amazing on so many levels!! One for us fans to be able to see these great stories come to life on the screen and yes who will play Marco. Two so fabulous for you of course, lol. Three that your loved ones let you know they too were happy for you. And finally, this is just freakin awesome, :)

I can hardly wait to see this on the Big Screen. It's always interesting to see how Hollywood translates our favorite book characters into life & flesh! Congrats to you! ;-)

I'm beyond thrilled for you!

Isn't it? I know characters will change, but I'm still amazed and delighted that my words will be spoken by real actors!

SQUEEEEEEE!!! I am SO jazzed about MUM coming to the screen!!! HUGE congratulations, Kate! Enjoy the ride!