Mama's got a brand new bag!

Sometimes things don't work out the way you want them to. When my Mum died in June, I told the funeral director that I wanted a Thumbie. That's a cast pendant of one of your loved one's fingerprints. He assured me that he had taken her fingerprints and that it wouldn't be a problem.

You see, after my Dad died almost six years ago, I went to the same funeral home with my Mum to make arrangements and learned about Thumbies. I wanted one and my mother bought one for me, saying it would be my Dad's last gift to me, making it that much more special. It came just before Christmas and I've worn it ever since. So when my Mum passed, I REPEATEDLY told the funeral diector that I wanted a matching Thumbie. No problem! Except ... he was new to the job and had never ordered one.  And so, he called in an associate who walked him through the process.

And I waited for my Thumbie to arrive.

It was supposed to come in 4-6 weeks.

At week 9, I stopped by the funeral home to inquire about my Thumbie.  The very  nice woman at the reception desk asked me to wait while she tried to find out what happened.

Sometime later, the woman (quite sheepishly) approached me and and said, "We can't find a record of the order."  Uh-oh!  She said, "We'll contact you as soon as we have any information." I took that to mean that the order had never been placed. I wasn't happy but, hey, mistakes happen.  So I went home to await a call.

The call came the next morning, and not from the young funeral director I had dealt with, but the Big Guy in charge who apologized profusely. Not only had the order NOT been made, but they could not find my mother's fingerprints--no matter where they looked. There was to be no Thumbie.

The New Comer Manager, John, very kindly offered me a replacement piece of jewelry.  This was to be a piece of jewelry that would hold a tiny portion of my Mum's cremains.

So a few days later, I grabbed my Mum from off the entertainment center in my living room where her ashes had been residing, packed her off in the passenger seat of my mini van, and she rode shotgun for her second trip to the funeral home this summer.  On the way, I told her all about the changes in our little suburb.  (Holy cow, there've been a lot of them in just a short span of time.)

John wasn't at the home, but the woman I'd spoken to the week before sat me down in the same room where Mum and I had made my Dad's arrangements and let me pick out a piece of jewelry.  It was a toss up between a dragonfly (my Mum had a pretty dragonfly pin that she wore on her favorite sweater) or a hummingbird.  (Every summer she hung a hummingbird feeder and delighted in watching those tiny birds have dogfights over who got the nectar.)  Since a dragonfly is a bug, and I'm not really a bug fan, I chose the hummingbird.

They took some of Mum's cremains and said the hummingbird would arrive within the week.  When they returned Mum to me, they'd put her "temporary" box (my brother is going to make a more permanent box for me for Christmas) inside a purple velveteen bag.  I laughed when I saw it, and told the woman, "Hey, Mama's got a brand new bag."  (I think she may have been too young to remember the song Papa's Got A Brand New Bag.)  So, Mum rode shotgun all the way home, wearing her new "dress."  (And I kept singing over and over again that phrase from the song Try A Little Tenderness.  "Women do get weary ... wearing the same old shabby dress."  (My Dad used to always call out "then buy her a new shabby dress" which always made me laugh.)) 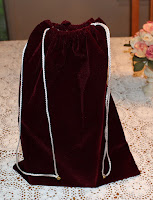 Less than a week later, the hummingbird arrived.  John called and asked me to bring Mum back because they had more cremains than they needed.  So, back in the velveteen bag she went, she rode shotgun again for her third trip in less than three months to the funeral home.

John and the whole staff at New Comer have always been very kind. Not only didn't they charge me for the Thumbie, they credited my brother's credit card, and gave me the hummingbird for free.  I'm impressed by their integrity. They could have just lied and said, "Oh, we found her fingerprints" and faked a Thumbie, but they didn't.  And they made it right.

Of course ... maybe I should have gone for the dragonfly after all.  Sometimes Mr. Hummingbird's wings jab me in the throat.  Mum's neighbor, Amy, said, "I'll bet your Mom's trying to get your attention."  My Mum would never hurt me, but I laughed at the idea, and now if the wings jab me I said, "Okay, what do you want me to do, Mum?"

So, Mum and Dad are together again on my entertainment center.  It would be much better if they were really here, of course, but thanks to my Thumbie and hummingbird charm, they're close to my heart every day.

Posted by Lorraine Bartlett at 6:59 AM

What a funny and beautiful story. I loved all the song references and love the fact that someone elamse has a comical look at death like I do. I lost my dad at age 11 in 1989. I would love to have had a Thumbie. That would be amazing as Daddy was my BFF, hero and artistic muse. Thank you for this article and for the chuckle this morning as I remember him, during this fall season when he passed away.

I'm glad you got a chuckle from it. I miss them both so much, but I'm sure they would rather me remember them with humor than with tears. (Although the tears aren't often far away.)

Beautiful (and glad things worked out). Losing your parents is something you never get over but I do feel they're with me every day.

When Mom died, we asked that the ashes be divided into 3 parts and then buried 1 box directly over her mother's grave, scattered one part on the point of the lake where she loved to stand and fish, and buried the last part under the first rose bush I planted at my house which I could afford because of my inheritance. Mom loved red so it's a red rose named "Bob Hope" who was part of Mom's generation. This rose has looked bad in previous years, but I just couldn't replace it because of Mom being there. It finally has looked good this year which is appropriate because she's been gone 10 years. Cordella

A funny and beautiful story Lorraine. I'm glad things worked out for you. If you get tied of your Mom poking you, you can put her on a longer chain. But I think the poke is a good reminder to you. You will never get over loosing your parents but it does get easier in time.

A funny and beautiful story Lorraine. I'm glad things worked out for you. If you get tied of your Mom poking you, you can put her on a longer chain. But I think the poke is a good reminder to you. You will never get over loosing your parents but it does get easier in time.

Thank you for writing about your Mom this summer. She died before my Dad. One day, years later, I realized that not only were my parents gone from this Earth, I was now the older generation. Although startled, I also felt that I learned about another part of my parents life that I hadn't considered before - being the older generation.
I'm glad the mixup was resolved and you have your reminder.
Zena

Left out a part: After the first sentence, it should read "My Mom..." rather than "She..."
Zena

What a great story. I love that your Mum and Dad are with you always around your neck. And I love you talk to your parents like I talk to mine. I am sure that the Humming bird was a good choice. They are so pretty and like little angels or fairies. Thanks for the heart felt story.... it warmed my heart.

Lorraine, this is a fabulous story. I love the road trips with your mom and the updates on the neighborhood. Apparently you were mean to have the hummingbird, not the print which is fitting as a little poke from mom is usually a good thing. Thank you so much for sharing this story. MareF

A beautiful tribute to both your parents. I wish I had known about the Thumbie when my Mom passed 6 years ago. What a difference that would make. I love that you maintained your humor and were singing to your Mom in the car. What a beautiful way to get through such hard times. I am sorry about your parents. I lost my Dad at 8 and my Mom made it to 84 before cancer took her . We never stop grieving them or missing them through all the small moments and all the days we live on this earth, but it seems to me you found a way to honor them in such a positive happy manner. Beautifully written thank you. My scene at our less then stellar funeral home was a terrible experience that included my racing across town to pick up Moms remains before my evil sister in law tried to nab them from the drunk funeral home director for herself and she did not even like my Mom but she wanted those remains. I was not having it! . Now that is a story for another time along with the drunks from the funeral home that showed up to take my Mom when she passed. I am glad your experience turned out well.