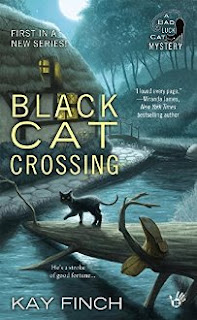 In the first in this cat-filled cozy series, aspiring mystery author Sabrina Tate is about to discover that when it comes to solving murders, her new feline friend Hitchcock is a master of sleuthing.

Sabrina has never been the superstitious type. Still, when she moves to Lavender, Texas, to write her first novel and help her Aunt Rowe manage her vacation rental business, Sabrina can’t avoid listening to the rumors that a local black cat is a jinx—especially after the stray in question leads her directly to the scene of a murder.

The deceased turns out to be none other than her Aunt Rowe’s awful cousin Bobby Joe Flowers, a known cheat and womanizer who had no shortage of enemies. The only problem is that Aunt Rowe and Bobby Joe had quarreled just before the cousin turned up dead, leaving Rowe at the top of the long list of suspects. Now it’s up to Sabrina to clear her aunt’s name. Luckily for her, she’s got a new sidekick, Hitchcock the Bad Luck Cat, to help her sniff out clues and stalk a killer before Aunt Rowe winds up the victim of even more misfortune.

I love stories that pull me in immediately, especially with a likable cast of characters that includes an endearing aunt, an aspiring writer, a hunky game warden, the townspeople and of course a mysterious feline. This was a fun read where everyone had a role in this evenly paced drama where all interactions were pivotal to the telling of this story; a story that quickly became a page-turner. The author did a great job in setting up this mystery with a slew of suspects and teasingly providing clues with a few surprising twists that I did not see coming at all. A captivating mystery, friendly characters, and engaging dialogue rounded out this very enjoyable and delightfully entertaining debut novel and I can’t wait to see where the next book takes us with Sabrina and her friends. Bonus recipes are included.

You can visit Kay at www.kayfinch.com 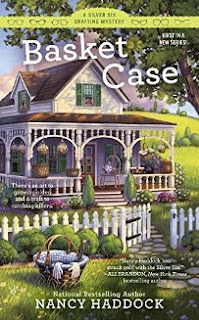 There isn’t much crime in Lilyvale, Arkansas, but local authorities have their hands full with Ms. Sherry Mae Stanton Cutler and her housemates—a crafty group of retirees who’ve dubbed themselves the Silver Six. But when Sherry Mae’s niece, Nixy, arrives to keep them in line, Lilyvale also plays host to a killer.

When Leslee Stanton “Nixy” Nix gets the latest call from Lilyvale detective Eric Shoar, she knows it means trouble. There’s been another kitchen explosion at her Aunt Sherry’s farmhouse, and the dreamy-voiced detective has had enough. If Nixy doesn’t check on her aunt in person, the Silver Six could become wards of the court. But the trouble Nixy finds in Lilyvale is not at all what she expects.

The seniors are hosting a folk art festival at the farmhouse, featuring Sherry’s hand-woven baskets, when land developer Jill Elsman arrives to bully Nixy’s aunt into selling the property. When Jill is later found dead in the cemetery, Sherry is suspected of weaving a murder plot, and it’s up to Nixy and the Silver Six to untangle the truth.

I like this fresh new entry in the cozy mystery genre. This was a fast-paced and enjoyable mystery that entertained me from the first page to the delightfully charming conclusion that left me with a smile. The author’s narrative in the telling of this finely tuned drama was spot-on placing me smack dab in the middle of all the action as everyone is suspect. The mystery of who was behind the murderous and harmful threats was well-played and it was fun following along with all the clues that Nixy and the Silver Six stumbled upon, a few with some hilarity. The dialogue was engaging and I love the camaraderie and interaction between the Silver Six, Nixy and the other residents of Lilyvale. Boasting a lovable and offbeat cast of characters and the “feel good atmosphere” of a small town, this was a terrific read and I look forward to the next book in this endearing new series. Bonus crafting tip and recipes are included.

You can visit Nancy at www.nancyhaddock.com 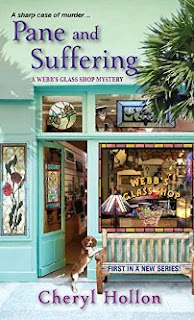 To solve her father's murder and save the family-owned glass shop, Savannah Webb must shatter a killer's carefully constructed façade. . .

After Savannah's father dies unexpectedly of a heart attack, she drops everything to return home to St. Petersburg, Florida, to settle his affairs--including the fate of the beloved, family-owned glass shop. Savannah intends to hand over ownership to her father's trusted assistant and fellow glass expert, Hugh Trevor, but soon discovers the master craftsman also dead of an apparent heart attack.

As if the coincidence of the two deaths wasn't suspicious enough, Savannah discovers a note her father left for her in his shop, warning her that she is in danger. With the local police unconvinced, it's up to Savannah to piece together the encoded clues left behind by her father. And when her father's apprentice is accused of the murders, Savannah is more desperate than ever to crack the case before the killer seizes a window of opportunity to cut her out of the picture.

I like it. With a cryptic message found after the death of her father and that of her “uncle,” Savannah begins an investigation using the skills she learned at her father’s hand to unspackle a killer who cunningly hides in plain sight. From the moment Savannah finds the message, this light drama takes off and the author takes us on an exciting ride as the crime and motives are explored by the clues planted and the potential suspects exposed as I watched it all played out. With a few surprising twists, the direction that pointed to the killer caught me a bit unaware until all the pieces of the puzzle stood out. The set-up of the mystery was good as it kept me reading on and I especially love the internal dialogue that Savannah has that adds to the telling of this enjoyable story. With a likable, a diversely quirky cast of characters and engaging conversations, this is a welcome addition to the cozy genre and I look forward to reading about Savannah and friends’ next adventures in “Shards of Murder.”

You can visit Cheryl at www.cherylhollon.com

I'm tickled to be in Dru's featured books, and to be in such great company!! Thanks, Dru, and waves to the Cozy Chicks! LOVE your books!

Looking forward to all these debuts!

Looking forward to reading these books!

I've read the first 2 books mentioned and LOVED them - great cozies. Looking forward to reading the last reviewed book of Cheryl Hollon's. Sounds like it will also be a great read.