A blast from the past


By Mary Jane Maffini aka half of Victoria Abbott

Are there friends in your life whom you are always happy to see? People who bring passion and intelligence and a sense of fun to every get together? Are there friends who—even if you haven’t seen them for two years—pick up in the middle of a sentence and it’s as though you were never apart? I have been very lucky in my many writing and reading friends, but today I want to tell you about another special group.

Some of the best reunions for me have been with my library school buddies from what was then Dalhousie School of Library Service.  We were all strangers when we started in the fall of 1979 and I was years older than the rest of them.

But over our  trials and tribulations (Cataloguing class, anyone?) friendships were born. Fun was had. Scamps got active. For example, the Government Documents class protested being moved to an earlier hour (8:30)  because the professor had a meeting with the Senate. The entire class showed up in early morning  gear: shower caps, housecoats, slippers, and, I believe a more than one toothbrush.  To his credit, the late great Dr. Norman Horrocks did not blink or let on that he’d noticed.  To tell the truth, I wasn't there because 8:30 was way too early for me.

The class of ’81 lives on in legend, at least we think.  Most likely no noisier group ever stomped through those halls.  Perhaps there’s still laughter ringing in the stacks. 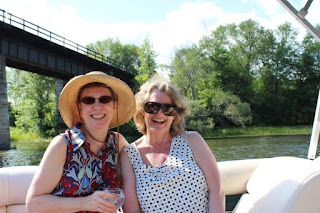 
Our small class of about twenty-eight scattered across the country and some to other countries, because this was back in the day when people could graduate and actually get jobs.  There were great careers, new relationships, children, happiness and heartbreak, and yet, so often so many of us kept in touch.  Even if you weren’t that great at keeping in touch, ahem, you could always catch up at the next opportunity. Over the years we've gathered in different combinations, but always with fun and laughter.

Recently we had the pleasure of welcoming back our friend, Ruth, who now lives in New Zealand and was visiting Ottawa.  Could we get together?  Who was available?  Although many of us are still in touch, only a few lived close enough. 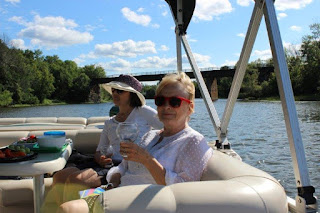 Seven of us were able to gather at our friend Doris’s riverside home for an afternoon of fun and a pot luck dinner.  Ruth came halfway round the world.  Nancy drove for four hours. 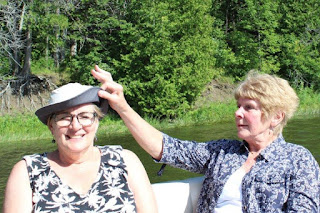 Robyn and Louise did too.  Heather managed to SKYPE from the West Coast.

As usual there was lots of food and laughter and catching up. There were updates on the classmates  who couldn't make it,


Plus there was an amazing boat ride. Perhaps no noisier group had ever boated down that section of the river.

Along with the laughter, there were tears as Robyn read from letters from our much-loved friend Peter who passed away years ago but lives on in our hearts.  As we were gathered around the table, Robyn also brought photos of a cranberry picking excursion in 1980 with a picture of tiny Victoria Maffini (aka the other half of Victoria Abbott) busy picking with the rest of us. 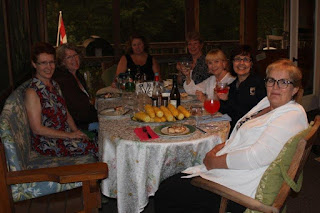 It was a day to remember and these are friends to treasure.  I feel lucky to have them and grateful that I was able to be part of this group and able to seize the day.

So what about you?  Let’s hear about your friendships, buddies, old schoolmates. Do you have one  special friend or a group? Do they enrich your life and make you laugh and sometimes cry?
Posted by Mary Jane Maffini at 1:00 AM

Nancy R - Nothing better than to get together with long time (not "old") friends! I have always been part of women's groups, from Brownies at age 8 to the DOA in high school (I can't tell you what DOA means, they'd cancel my membership). For almost 40 years I have been blessed with sorority friends (Beta Sigma Phi), some spread far across the country. What you said MJ, about "picking up right where you left off months ago" is so true. And yesterday 7 of us from my "Sewing Group" celebrated at a birthday lunch. We have been "stitching and bitching" together, on alternate Wednesdays, since 1969, when we all taught at Gloucester HS. Friends like these see us through tragedies and triumphs and are so important to our journey in life!

Just a week ago, I went to my 60th high school reunion. While seeing all the people was fun, the best part was meeting my old best friend Beverley. We got in touch with each other again on Facebook. She lives in NH and I in Ct. She is about a 3 hour drive from me. We decided to go to the reunion and stay overnight in Sturbridge Ma. We have not seen each other in 52 years. She had forgotten how short I am and I had forgotten how tall she is. We have white hair now and had seen pictures of each other so knew about that, but when I walked from my car and saw her in the distance, I had a flash back to her and her strawberry blond hair for a second. We got right back to the way we were. It was as though we had never been apart. We tried to tell each other about all that has happened in our lives but we need more time for that. Isn't it funny how that happens. We plan to meet again before she goes south for the Winter.

What a lovely story, Mary Jane. It's so wonderful that you all stay in touch, and are able to share your memories, and remember to include those who can no longer be with you. I was able to reconnect with an old friend from high school this past winter, and that meant so much to me… There's nothing at all that can compare to a lasting friendship. :-)

So true, Nancy! I love the idea of the sewing group. XO

So happy you reconnected with your high school friend, Nicole. Thanks for coming by!

Oh, yes, M.J. My dearest & closest childhood friends that I still see regularly because both sisters live in Vienna, VA in Northern VA where I visit regularly because two daughters & gradnchilldren live there. I grew up across the street from Nancy & Diane in Arlington, VA. Memoreeeees. :)

Most definitely, MJ! I'm still friends with a great group of women I met when I moved to Dallas and we were all around 16 yrs. old, in high school. We are scattered around the country and all lead busy lives, but even though we don't see each other in person very often we remain in touch, mostly using the old-fashioned way of telephone calls, since none of us are too great at keeping up on Facebook;) Our conversations on the phone, by snail mail, email, etc. just pick up right where we left off, and much laughter ensues!