First let me congratulate my fellow chicks on their book releases this week. Join me in saluting (in alphabetical order)  the fabulous:

Ellery Adams Murder in the Paperback Parlour
Mary Kennedy Dream a Little Scream
Leann Sweeney The Cat, the Sneak and the Secret

What a great August crop of delicious cozies!


I'm sure you're already reading them already.

And now to the park for a party. Drum roll please.

Here's a bit of background. The problem with wiener dogs is that they are small but addictive.  The little creatures are stubborn, funny, clownish, determined, cuddly and loyal.  They also prefer wiener dogs to all other creatures except maybe their ‘mom.'  Even though I like all dogs, I am hooked on them. It’s hard to stop with just one. You just have to have another. Life is fun every day with Daisy (12 years) and Lily (9 years). This is also why I had to include two rescued dachshunds in my five Charlotte Adams books.

Imagine the fun for all concerned when there’s a party for those wiener dogs! This year Daisy and Lily and MJ attended their third Wienerpalooza where a Saturday afternoon in late July is all about the dachshunds. Wienerpalooza is a fundraiser for Canadian Dachshund Rescue, an amazing and effective organization. By the way, there are terrific dachshund rescue organizations all over the United States. 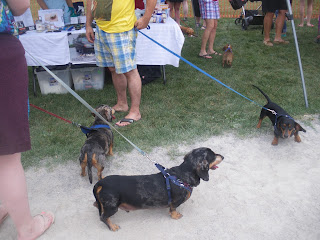 I am sure that there were at least a hundred and twenty little hot dogs, but the park was spread out, so it was a bit hard to get shots of large numbers. I am sure you get the idea from these here and there shots.  Lots of little dogs less than knee high. 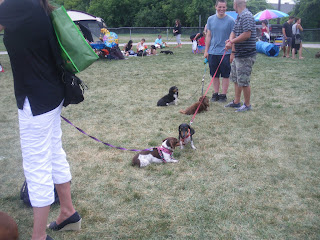 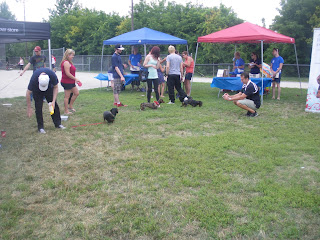 There were wiener races and a costume parade.  The princesses declined to run in the dachshund races. 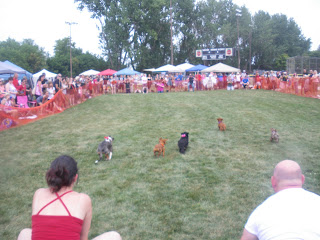 No problem. They usually choose to go the wrong way and come in last or even later than last, like not at all.   Sometimes they just lie down in the field. Why not? Life is a nap and they aren't the only ones to do that. 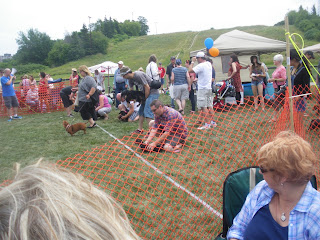 Daisy and Lily didn't dress up this year. We were in a rush so missed the costume contest.  This is what they wore last year. 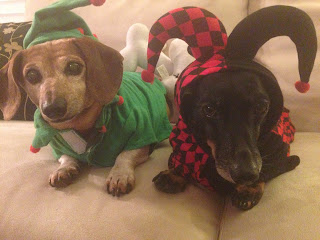 I didn’t get a picture of the winner, but we understand it was a doxie  in a Timbits container who snagged the big prize.

If you don’t live in Canada, you need to know that Timbits are tiny doughnuts (those doughnut holes).  I figure that's funny on a number of levels.

And now on to the purpose of all this fun and games: rescuing dachshunds. It takes money to rescue, house and offer medical care to the poor little critters.

This little beauty was one of two little long-haired doxies wearing ADOPT ME scarves. 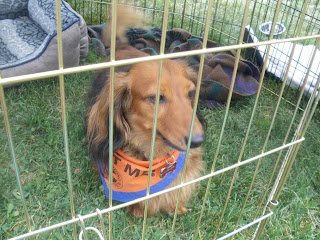 I hope they both find their perfect ‘forever home’.  It was all I could do to keep it to two.
We ran into old friends like the beautiful Coco and her ‘mom’, Mary Ann.  Coco is a lovely rescued girlie and Mary Ann rescued her through Canadian Dachshund Rescue. We’ve been friends for years. 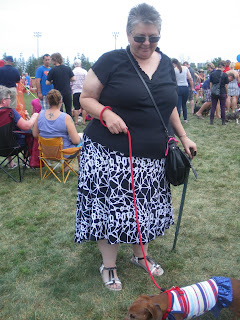 We also saw Harmony and Haley in their costumes. Nice ruffles, Haley! 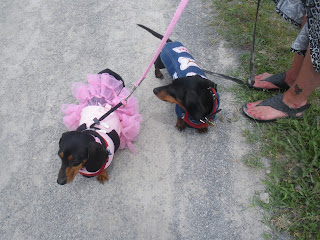 Last year at a doxie event they won as a bride and groom. That white veil really took a beating as they raced around. This was all that was left of the veil by the time I got a photo! 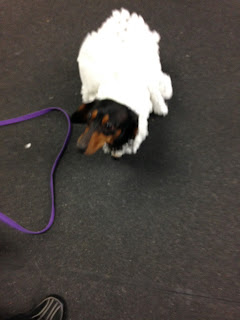 It’s always fun to see these special little doggie buddies,  We even got to visti with Gogo, a tiny darling who was an Ottawa Therapy Dog for years. Like Daisy, she is now retired, but still adorable. 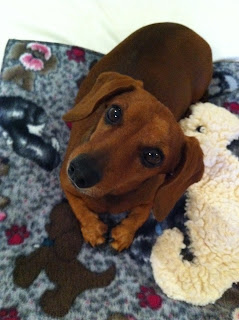 There are many dachshund-themed ‘shopportunities’ at Wienerpalooza and that is always fun. I also enjoyed the barbecue, but I stuck with the burger. Hot dogs seemed wrong somehow.

Now we have to wait until next year for this wild and crazy time again, although our local dachshund group arranges very amusing get-togethers too.

What about you? Have you ever been to a dachshund party?  Do you do fun things with your pets?  Other silly things?  Go ahead: confess!

Looks like a good time was had by all, the humans and the wiener dogs! Am actually surprised that hot dogs would even be served at this particular event. And I've never taken my cat(s) to organized activities. They can't be trained, herded, persuaded to interact with others, the way that dogs can. Cordella

I have never been to a dachshund party, but it looks like everyone had fun at this one! I have a maltipoo (cross of the Maltese and Poodle), and she loves to play. So I play games with her (only she knows the rules). Mostly I play a strange version of fetch/chase where sometimes I am allowed to throw the toy for her, but she refuses to give me the toy that throw again. Though I get to chase her around the room while she has the toy. She has a great time.

LOVE this post, MJ! And thanks for the shout-out about our August releases. What a fun event, I wonder if I could fit a "wiener dog" into my cat household?

I can't imagine cats having fun at such an event either, Cordella! The dogs have a great time though.

Thanks for coming by! I always enjoy your comments.

Oh yes, the dog rules! We never figure them out either. Your maltipoo sounds adorable.

We are dog nuts as you have probably figured out. We do like cats but can't have 'em because of allergies.

Thanks, Mary! Doxies either LOVE cats or HATE them. It's one of the characteristics that they list in their forms on the adoption site. So you never know!

I love watching the races.

I love watching the races.

I should have kept this post to myself - now Pep wants to know when we are going to Pugpalooza. No costumes or racing for him though, either.

Great pics and a great cause.

Your babies are so adorable! We almost adopted a daschund puppy once, but she was so teeny tiny I was afraid my kids would break her! :-). We have a beagle named Charlie who we adore, but we've never been to any fun events like Welneroalooza! 🐶❤️😄

Thanks, Robert! Me too. They are hilarious.

Thanks, GC and Pep! We have taken Peachie the Pug to this and she had a great time. Sometimes she will wear a hat. I'll have to post that one of these days.

Daisy and Lily and MJ

It is scary when they are little, Nicole! But ours survived somehow. We love beagles and they are tons of fun all by themselves.

What a terrific blog today, dogs instead of cats for a change.

I am currently working on my very first quilt. It is made of the neckerchiefs that my Tess and I received when doing fun runs for the local Humane Society as well as T-shirt squares from the same. My dear Tess (a cocker spaniel - Golden Retriever mix rescue) crossed the Rainbow Bridge 2 years ago and I am finally trying my hand at her tribute quilt.

Daisy and Lily would agree, although cats might be a tasty snack. Of course, they've never caught one.

Sally, you brought tears to my eyes. What a lovely tribute to Tess. I hope your grief is lessening and happy memories are left. My Smudge left us nine years ago and I still miss him, although the princesses are very distracting.

Wienerpalooza! I just love it!

Locally, we have the Dachshund races at German Fest. Ginger hopes to attend next year. http://germanfest.com/dachshund-derby/