Honestly, we were just kids! 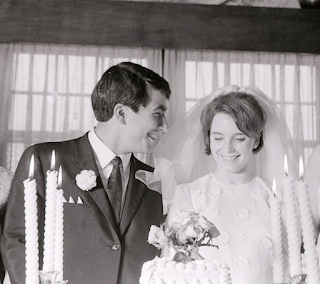 Forty-eight years ago yesterday I said yes to this very cute little Italian guy.  Of course it was a bad idea: we were two kids who were partway through university and not a cent to rub together.  We were too young and had no idea what we were getting into.  Now two daughters, four grandchildren, and five great-grandchildren later, we seem to have bumbled through.  One of our daughters is Victoria Maffini with whom I write The Book Collector Mysteries as Victoria Abbott.  The Marsh Madness, book four, is coming September 1.

Four generations of us went to see The Minion Movie on Sunday, proof that you never really have to grow up if you play your cards right.

At any rate, the joke around here is that the first forty-eight are the worst.

Our decision was that I would teach school while he finished his degree and then I would finish mine.
Of course, the stats were against us and two of the middle-aged teachers at the school where I worked would regularly make a point of telling me that men usually leave wives who put them through school.  This was followed by knowing smirks on their part.

Too bad I didn’t have money riding on that one.  When he finished, I returned part-time.  None of it was easy and I do remember the years when a run in my pantyhose spelt financial disaster, but somehow we managed.

We’ve learned the hard way that celebrating anniversaries at home with a nice meal and some good wine is the way to go.  We'll have  a treat from the grill and eat in the screen porch.  Casual, but there is a candle (and the gnome so we'll behave) 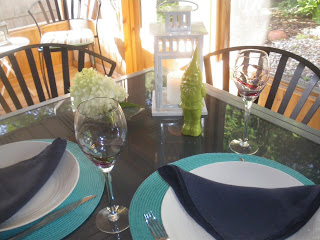 We like flowers too.  Here is this years ‘bouquet’: a weird gathering of protea and small orchids, bark, leaves and vines.  I’m thinking Star Trek but I love it. 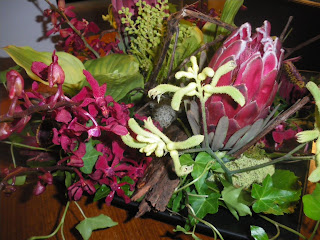 We’ve had many laughs and—with my Irish genes (and short fuse) and his Italian upbringing—there have been many ‘lively discussions’ and even fireworks over the years.  But as the French say, “Vive la difference!”  Around here that could mean many things, including: No, I thought you put the dog out.

As we had a very big scare in 2011,  on so August 12th,  we felt lucky and grateful for every extra year we have together, (no matter who put the dog out) because many of our friends and family had different outcomes.  So here’s to happiness and laughter and fireworks, however you find them! 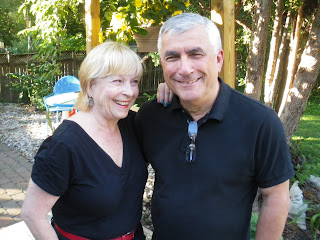 How about you? Do you have a celebration or a memory to share? Happy or bittersweet, we want 'em all.  We love to hear your stories and read your comments. I should mention that power outages in the past few weeks have messed with some of my responses, but you’re in my thoughts.
Posted by Mary Jane Maffini at 1:00 AM

Yes, you were just kids but you made it very successfully. Congratulations! Loved both the wedding picture and the picture you just took. See that your husband isn't wearing his eye patch anymore and love the gnome next to his left arm. Hope you have a huge party when you reach your 50th anniversary. Cordella

Happy Anniversary! We were just kids, too - and coming up on our 40th. Our one liner was that we couldn't afford a divorce (and he couldn't afford child support for 5 kids!) so we had no choice but to stick together. The motto of our marriage has always been and continues to be "one step forward, two steps back". If you marry your best friend, you have someone to battle through life with! Your celebration sounds wonderful!

Oh my gosh! We have the same wedding anniversary! My husband and I celebrated 15 years on the 12. Best day ever! Happy anniversary Mary!

Congratulations! Sounds like you two came through well. My husband & I just celebrated our 43 years together on the 12th as well.

He's *still* cute! And you don't look old enough to have great-grandchildren! What a lovely story. My husband and I have had some of our best celebrations at home with a bottle of champagne and some good food. My first husband died after 22 years and present hubby and I just celebrated #13. Am I allowed to add them together?

Thanks so much, Cordella! We are planning a back yard bash for the fiftieth - just hoping we finally get the bleepin' grass fixed by then.

Thank you, Dru! We are lucky with our friends (like you!) too.

LOL! I love your reasons and your motto! I'll pass it one to you know who.

The same to you, Sheryl!: Happy 15th plus one day! I think it's a great day - usually good weather and a relaxed time of year.

Is that fun, Jody! I love sharing anniversaries with friends. Forty-three is quite and achievement too.

I always like your ideas, Peg! Add them together - it's all about being happy together. And I'll tell he's still cute.

Awww. Congratulations! One of you must be very stubborn, because I think that's what it take to stay together that long. It must be him, right? ;-) I had a birthday party for my 14th birthday. Nobody came except one girlfriend of mine, a younger son of one of my mom's friends, and future hubby. He sent his mom off to drive around the block a few times when she came to pick him up. Told me he would call me "in a couple weeks when my schedule opens up." Phone call 7:30 the next morning, one terrific bicycle ride around the lake and the rest is history. We fought like crazy all through high school, everyone said we'd never make it but 46 years later I guess HE is too stubborn to call it quits.

Have a wonderful celebration! xo

I love this post, M.J. :) Congratulations on a wonderful and successful marriage that's lasted so long. My marriage ended after 32 years, but I kept on sending out positive energy. It's more powerful than anything. And now my ex is in Northern VA where we started out and two of our four daughters live. A third, Melissa, comes down frequently from NYC. And, believe it or not, we ALL get together for family events and all sorts of things. And Mom & Dad get along just fine. BTW, my girls are really, really happy Mom & Dad get along. Too many former couples do not. So, congrats, my dear, for making it work. I'll raise a glass of Guinness to you tonight. :)

I love your story, GC! That is so beautiful and I love your theory about someone being stubborn! It sure takes something.

Hugs and congrats to you and your hubby.

Good for you, Maggie! A civilized divorce is a great gift to the entire family. The alternative is a lot of grief.

Nothing to share on my end, except to wish you the happiest of anniversaries and here's to many, many more! :-)

Let me chime in as well. Happy Anniversary. What a lovely post.

What an awesome testimony - happy, blessed anniversary! May you have many more years of joy and love!!

Thanks so much, Nicole! Hugs to you. MJ

Lovely to see you here, Ellen! Thanks for the good wishes!

Thank you, Mama Cat! Glad you like it and we appreciate the wishes.