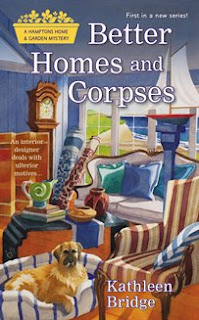 After Meg Barrett found her fiancé still had designs on his ex-wife, she decided it was time to refurbish her life. Leaving her glamorous job at a top home and garden magazine, she fled Manhattan for Montauk, only to find decorating can sometimes lead to detecting. . .

In between scouring estate sales for her new interior design business, Cottages by the Sea, Meg visits the swanky East Hampton home of her old college roommate, Jillian Spenser. But instead of seeing how the other half lives—she learns how the other half dies. Jillian’s mother, known as the Queen Mother of the Hamptons, has been murdered. Someone has staged a coup.

When she helps a friend inventory the Spensers’ estate for the insurance company, Meg finds herself right in the thick of things. Cataloging valuable antiques and art loses its charm when Meg discovers that the Spenser family has been hiding dangerous secrets, which may have furnished a murderer with a motive. As Meg gets closer to the truth, the killer will do anything to paint her out of the picture. . .

I like it. A chance meeting with a college friend gets Meg involved in a murder mystery that pulled me in and never let me go until the last clue was exhausted and a murderer was identified. I love the pacing and how the story flowed from chapter to chapter quickly becoming a page turner as I had to know what happened next. The author’s narrative in describing the scenes through the eyes of Meg placed me right there in the middle of all the non-stop action once the sleuthing began. Who was behind the murder? I had my suspicions and the presentation of all who had motive kept me in intrigued right to that aha moment where I knew the killer’s identity and I reveled in watching how it all played out with a couple of twisty turns that enhanced the telling of this tale. With Montauk and the Hamptons serving as the backdrop, this was a very enjoyable whodunit with good dialogue and a nice cast of characters and I look forward to learning more about Meg and her friends in the next book in this pleasantly appealing new series. Bonus vintage décor tips and recipes are included.

You can visit Kathleen at www.kathleenbridge.com 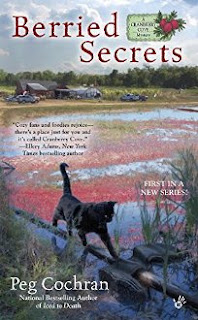 When Monica Albertson comes to Cranberry Cove—a charming town on the eastern shore of Lake Michigan—to help her half-brother Jeff on his cranberry farm, the last thing she expects to harvest is a dead body.

It seems that Sam Culbert, who ran the farm while Jeff was deployed overseas, had some juicy secrets that soon prove fatal, and Jeff is ripe for the picking as a prime suspect. Forming an uneasy alliance with her high-maintenance stepmother, Monica has her hands full trying to save the farm while searching for a killer. Culbert made plenty of enemies in the quaint small town. . .but which one was desperate enough to kill?

A dead body in the bog and a determined heroine out to save her brother and his farm brings this wonderfully executed tale to life in what I hope is a long-running series. I like the way the mystery was presented scene by scene that gave way to a significant pool of suspects who had stronger motives to kill, and uncovering those secrets plays a strong role in keeping the story fresh with each pivotal clue closing the gap on the killer’s identity. It was fun watching how all the pieces fell into place as Monica serendipitously got the answers that she needed. With a great cast of characters that includes Monica, her brother Jeff, stepmother Gina, the eccentrically quirky twin sisters and the bookstore owner, I’ve come to like visiting the small town of Cranberry Cove and I look forward to more adventures with Monica and her friends. Bonus recipes are included.

You can visit Peg at www.pegcochran.com 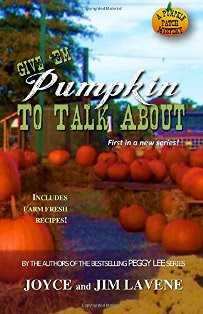 Richmond attorney Sarah Tucker returns to sell her family’s abandoned farm in Misty River, Virginia despite unanswered questions about her grandparents’ disappearance sixteen years earlier. Sarah was only twelve when she went to visit and found her grandparents had vanished. No amount of searching has brought answers.

Now Sarah is faced with other issues when a man is killed who claimed to have information about what happened to her grandparents. She learns of a Confederate chest of gold that is said to be buried on the property, and treasure hunters who are willing to do anything to get their hands on it.

Were her grandparents murdered for the gold? Sarah can’t sell the land and go back to her life until she has answers. But the cost of the answers may be her life.

Once again the Lavenes have penned a light-hearted drama that was very enjoyable and hard to put down. The pacing had an evenly flow so that each scene took me in the direction I needed to be to solve the puzzling mystery of Sarah’s missing grandparents and who is killing the potential buyers. I like how this whodunit was set-up keeping me intrigued with all the goings on in Misty River as someone desperately wants to stop the sale of the land. A suspect here; a suspect there; a suspect everywhere as the author did a good job at planting the seeds on the few with some red herrings to keep me plodding along until it was apparent as to who the killer was that came at a discovery. Sarah is a great heroine and I can’t wait to learn more about her. The dialogue was engaging and I especially enjoyed the witty repartee between Sarah and Jack. With a lead in the disappearance of her grandparents, I can’t wait to see where we go next with that and the adventures that await Sarah and her friends.

You can visit Joyce and Jim at www.joyceandjimlavene.com 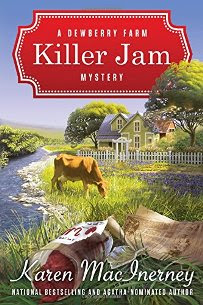 When Houston reporter Lucy Resnick cashes in her retirement to buy her grandmother’s farm in Buttercup, Texas, she’s looking forward to a simple life as a homesteader. But Lucy has barely finished putting up her first batch of Killer Dewberry Jam when an oil exploration truck rolls up to the farm and announces plans to replace her broccoli patch with an oil derrick. Two days later, Nettie Kocurek, the woman who ordered the drilling, turns up dead at the Founders’ Day Festival with a bratwurst skewer through her heart and one of Lucy’s jam jars beside her. . .and the sheriff fingers Lucy as the prime suspect.

Horrified, Lucy begins to talk to Nettie’s neighbors, but the more she gets to know the townspeople, the more she realizes she’s not the only one who had a beef with Nettie. Can she clear her name, or will her dream life turn into a nightmare?

This was very enjoyable. A past perceived discretion threatens Lucy’s farm from the previous owner and when she is found dead, Lucy becomes the only prime suspects and it’s up to Lucy with some unexpected help to clear her name and save her farm. I love the pacing and the comfortable tone that is featured in this fresh new whodunit. The murder mystery was well-executed and I enjoyed watching it play out as the story got closer to the killer’s identity with a few twisty turns. The author did a great job in keeping me intrigued with all that was going on and introducing the town and residents of Buttercup that I too, wanted to buy up land and farm it myself. With a wandering cow who I found adorable, this was a fun read. Boasting a lovable cast of characters, a picturesque setting, great dialogue and a blossoming romance, this was a delightfully charming beginning to a debut series that I hope is here to stay. Bonus recipes are included.

You can visit Karen at www.karenmacinerney.com

I enjoyed Killer Jam. I have not had a chance to read the others yet. They all look good! Have a great weekend!

Thanks dru! I can't believe there are so many new series starting now!

Thanks for your blog. It helps me focus on the books I would be interested in reading. kat8762@aol.com

Dru---I have a big request for your reviews. If you happen to know, would you indicate somehow that a book is in e-book (Kindle) format only? I read most of Jim and Joyce Lavenes' books so would have noticed this new book if it had been on the shelf at B&N. I know it wasn't so went into fantasticfiction.com to see if it was being published later and saw that it was Kindle only. I just bought it without making the unnecessary trip to B&N. Thanks. Cordella