By Mary Jane Maffini aka half of Victoria Abbott

I’ve been meaning to write a post on procrastination, but the next week always seems a better time to do that. However, this week, while I was avoiding something that really needed to be done, I have happened to read about the phrase ‘eat your frog’.

Apparently this phrase, which has been adopted by time management gurus and motivational speakers, was inspired by the great Mark Twain:  “If you eat a frog first thing in the morning that will probably be the worst thing you do all day.” 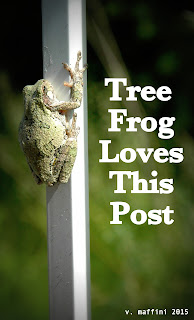 When I regained consciousness, I realized that this metaphor for doing the thing worst first is actually a terrific idea. But it’s hard to argue with the idea, even though around here we quite like frogs and the great job they do. As you can see, daughter Victoria (the other half of Victoria Abbott) loves to photograph them.

Regardless, I resolved to do the hardest thing first, right after my nap.

We started to adapt the phrase and use it, mostly with each other. Here’s a typical conversation:

Me: Did you eat your frog yet?
He: No, I have a problem with a bunch of tadpoles.

Or …
He: Did you eat your frog yet?
Me: My office is like a holiday camp for frogs.

Never mind. We did start to do some horrible things (think government forms) we’d been putting off waiting for the right time.  We love the feeling of exhilaration when that nasty little job is out of the way first thing in the morning.

Everything else seems possible and even fun.  Thank you, froggies!

And now, what about you? Do you ‘eat the frog’? Or do you have another idea for getting unpleasant tasks out of the way? Or a gentler metaphor. Let’s hear it!
Posted by Mary Jane Maffini at 1:00 AM

At work, I try to "eat the frog" first so I can enjoy the rest of my shift (though this is the first time I ever heard of "eat the frog").

A vegetarian could faint at the thought, Jen! Thanks for coming by and sharing. I think that frog could make the rest of your shift better.

Sounds like a good idea and saying.. Maybe I'll try it tomorrow.

I love this metaphor, but have never heard it before! I definitely do feel better if I "eat the frog" first thing in the morning, it's such a relief having gotten the worst thing on my scheduled out of the way (i.e. this morning I called the insurance company before leaving for work). However, most days I don't do this and end up with an unpleasant weight on my shoulders. Maybe I will put a frog pic on my refrigerator to keep me motivated - lol! :-)

Frog pie! Nicole, you are a genius! Thanks for that tip,

I am just thinking of the frog indigestion I will get when I have to initially eat all those frogs to catch up.

I need to space my frogs out. One or two a day is as much as my brain wants to handle. And by the way, the bullfrogs in my pond croak all night and are really annoying. Anything you can do about those frogs, MJ?

I have never heard that phrase before, and it sounds really gross although frog legs is/are a delicacy in France. Like the concept though. Cordella

You may need a new plan, GC! This one has a definite downside. Hugs. MJ

I know you do, Maggie. You're very productive! Hugs. MJ

I agree with spacing them out - too many frogs and we turn green among other things) Are the bullfrogs amorous? If so, you're out of luck.

It's gross all right, Cordella. Just think of frogs' legs in a Paris restaurant. Hugs. MJ