Want Potato Salad With That?

The answer to the subject line of this post is ...that depends on where I am. If I'm at my own home--or anyone else's--then that answer would be an unequivocal YES! My Mum and her sister made THE best potato salads on the planet. They bore little resemblance to each other, but both vied for prominence as THE best.

My Mum made her potato salad with onions, celery, sweet pickle relish, and radishes, with egg slices as the crowning touch.  My aunt (her sister) mixed chopped hot hard-boiled eggs in along with the mayo, onion, celery, etc.  Can you say these sisters ruled in potato salad land?  That would be a definite YES!  (And considering they were English girls making an American favorite -- they both excelled!) 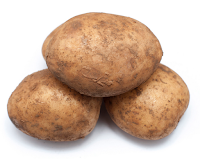 I have tried potato salad in scores of restaurants with the same (iky) results. The mayo, onion, celery part is good (some even have sour cream, and even though I'm not a sour cream fan, the mixture was good), but for some reason restaurants (and grocery store deli departments) potato salad has one HUGE flaw:  the potatoes are ALWAYS undercooked.

Mr. L and I went out to lunch on Wednesday to one of our favorite local restaurants.  Every other time we have ordered a sandwich we have always been served a marvelous macaroni salad--and it's never the same and always good. Sometimes it's made with sour cream--sometimes it's not.  Once it was made with sun-dried tomatoes (OMG--THE best).  The pasta is always different (and not chewy, either.  Sorry--I'm not a fan of al dente pasta.)  But on Wednesday ... you guessed it-- UNDERCOOKED potatoes in potato salad.

Some of the chefs are CIA (Culinary Institute of America) trained. Don't tell me they can't tell when a potato is cooked or raw.

So, do all restaurants (and grocery store delis) buy their potato salad from one Giant Potato Salad Conglomerate that has decreed that ALL potato salad in the US will be made with undercooked potatoes -- or were they trained to think that the masses couldn't tell a cooked potato from an uncooked one?

Sadly, my Mum is gone. I will never eat her potato salad again. And much as I've tried to replicate it, I can only come close.

I want my Aunt's potato salad recipe. I'm calling her on Monday and will ask because it's been years since I've eaten her version. All I remember is that last HUGE dollop that I preferred to eat instead of the steak, burger, or hot dog that was on offer because it was THAT good.

Do YOU have a magic potato salad recipe?
Posted by Lorraine Bartlett at 12:00 AM

No special recipe but my gripe is that restaurant, deli, etc. potato salad is mostly mayo.

I love potato salad also, but my biggest complaint is that the potatoes get lost in all the mayo and/or mustard. I don't usually make potato salad because no one else in the family will eat it - unless it is my aunt's German potato salad. She got the recipe off the side of a can of ? oh, so many years ago. My son who has lived in Germany says it isn't really German potato salad. But it has bacon in it, and I double the amount of bacon that my aunt told me to use.

I seem to only like my own potato salad. I'm with you Lorraine, I like the potatoes cooked.
I made up my own recipe. Took a little from my mom and some from my mother in law.
Potatoes cut up very small, Onion chopped fine, Hard boiled eggs chopped fine and then all mixed together. Sprinkle with a little sugar, salt, and pepper. Then mix the Hellmans mayo with some Yellow mustard until a golden color. Mix all together until you get the desired amount of mayo mixed in it. You can put any left over mustard/mayo in macaroni salad too. You could use any mustard you like but I like the flavor of the old yellow one. I think I'll make myself some this weekend..

I have the same complaint about rest and deli potato salad undercooked potatoes. My family tells me I make the best potato salad that sounds just like your aunts. I am always asked to bring the potato salad even in the winter.

I think I must be un-American because I don't like potato salad very much. I pass it by or get a small spoonful except for the deviled egg potato salad that I can get at my local Safeway deli. The potatoes are cooked, and the egg yolks are creamy because they are deviled first and then combined in the salad. I don't think any mustard is used and neither is/are pickles or relish. Cordella

You are so right about the potato salad in most restaurants and delis. In addition to the potatoes being undercooked, it often has a vaguely chemical taste - ugh. My mom's was the best. I make it with a little variation I got from a recipe from Kraft or somewhere years ago: onions, sweet pickle relish, black pepper, eggs, with egg slices and paprika on top. I have added fresh-cooked bacon bits and mix some yellow mustard in with the mayo. Never celery! My mom was adamant about that. I think actually that was because she had really poor fitting dentures and the celery just didn't work, but we thought it was because celery was just wrong in potato salads, sloppy joes, mostly everything.

My grandmother's German potato salad was the most magical for the mouth ever!! It was best still warm but was still sublime when chilled. I've made it so many times and it's very good, but not even close to my grandmother's.

I totally agree with you Lorraine. I also think most restaurants and delis put too much mayo in potato salad. I do not like a drippy salad of any kind. I like a more creamy potato salad. So I make sure the potatoes are fully cooked and then I mash them. I add chopped boiled eggs, onion, celery and bell peppers. I mix it all with mayo and a tiny bit of mustard. I garnish the top with sliced olives and sprinkle paprika.

I use watermelon rind pickles and my family loves it!

My whole family begs for my potato salad. I boil the russet potatoes with skins on (or in their jackets), allowing you to easily peel and dice them afterwards. I chop the egg whites finely, and cream the yolks with a fork adding some mayo. I've never
liked chunks of yolk. Then I add some finely chopped celery and lots of green onions. Season with salt and pepper, and lately I've started adding mustard. Mmmmmmm! Garnish with grape tomatoes & a few dashes of paprika. (If you like your salad a tad on the sweet side -- use Yukon Gold potatoes.)

I've only had potato salad with mustard once or twice. I think I liked it. Must make it that way to see. Thanks!

I LOVE celery in potato (and egg, chicken, and tuna) salad(s). In fact, I like my salads "crunchie" so I always add more than a recipe calls for. Yum!

I love German potato salad and I'll bet I haven't made it in a decade. Putting that on the list of things to do soon!

I think the missing ingredient for those of us trying to replicate our mothers' recipes is ... love.

That's how my aunt makes her potato salad -- mashing it when the potatoes are hot. I made it today and only put in three hard boiled eggs. I'll put at least four in next time because I like the nice yellow coloring.

Sounds wonderful. I was going to put in some freshly chopped parsley ... but then forgot. Wonder if it tastes good as a garnish.

I agree Lorraine, my Mama made the best salmon patties, I get close but it doesn't taste like hers did. I think you are right it is love.

I vary ingredients in my potato salad, but it will always have: boiled eggs, pickle relish, celery, mayo, a tad of mustard and a small spoon of sugar!!!!
I have added: bacon, shredded cheese, bell peppers, English peas, onion, (that I am not crazy about) and have mixed sour cream with the mayo.
there are so many alternatives........ But, like you, I want my potatoes done!, but not smashed.

Lorraine, are you going to share you aunt's recipe? I'm a potato salad nut, though I have three recipes I like--one a quick and easy German salad, one a lemon dressing, and one from County Line BBQ with an amazing amount of dill pickle relish. Still I'd love to see one from your family.

Unfortunately I have never found the perfect potato salad recipe for myself. However, a family member makes the best German potato salad I have ever had...served warm and decadent! I actually like some of the deli salads from the grocery store but would love to find my own recipe someday. Now talk about broccoli salad and I'm all over that! I hope you're doing OK since your mom passed away. Still cleaning out my mom's house with no end in sight but finding lots of treasures (pictures, family items, etc.) that I will cherish!

Well, her recipe is more about how she makes it -- not the ratio of ingredients. Since there's just Mr. L and me, I used little creamer potatoes. While they were cooking, I chopped a LOT of celery and onion, and three hard-boiled eggs (next time I'll use at least four). Then when the potatoes are cooked, you mash them. Then mix them together with mayonnaise and salt and pepper to taste. By mashing the potatoes, the mayo gets thoroughly mixed in, and doesn't just sit on the potatoes. Also, with this recipe, you don't get "weeping" (it doesn't go watery after a day). Mr. L really, really liked it!

I, too, love HOMEMADE German potato salad, but haven't made it in at least a decade. That's on my list of things to do soon.

I've been cleaning out my Mum's house, too. Finding lots of pictures and wonderful little treasures, too, but man--that "no end in sight" sure says a lot. I can see this taking me several months. I only get to work on it a couple of hours a day, which takes me away from writing, but it has to be done. Sometimes I cry, and sometimes I look at the ceiling and say, "Mum, what were you thinking?" Thanks for asking.

I agree about the super market potato salad (and restaurants). My recipe evolved when I lived in a boarding house. The woman who ran it would not put onions into anything, so one day all the gals got her permission, went shopping, then used her kitchen to make potato salad. I still use the recipe we came up with. Celery seed instead of celery, potatoes, chopped boiled eggs, onions, chopped sweet pickles. For the dressing we used mayo, yellow mustard, sweet pickle juice, Worstershire sauce, and added the celery seed. (I judge amounts in the dressing by the color.) Add sliced eggs and paprika on top. Best if made the day before eating.

If I could I would drop in on you and eat some of your potato salad. It sounds wonderful.