Now that clears things up!

This week my husband had his second cataract operation.  We have had some troubles as a result of other operations in recent years, so walking into a hospital is not our favorite thing. But this operation seemed nearly miraculous.

I remember some years ago, my friend’s mother spent more than a week immobilized in a hospital bed because she’d had cataract surgery.  One false sneeze and it would have been game over.

That was troubling as cataracts were the leading cause of visual impairment. 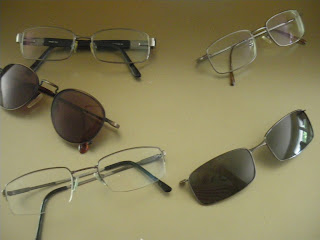 But advances in technology have turned this into outpatient surgery.  Now with something called the interocular lens, not only can the cataracts be removed, but vision can be corrected too.

These days the longest part of the operation is in the waiting room and that’s pretty short.  You can even order a special improved lens if you want, as easy as extra cheese for your pizza.

Now you are awake during the surgery, but in a very mellow mood because of the sedatives.  You must have a ‘guardian angel’ with you to drive you home or they won’t let you leave.

Half an hour after the surgery, you’re offered a sandwich and juice you are sent home with your ‘guardian angel’ who has made sure you have sunglasses to wear. You’re told not to mow the lawn or jump up and down for a while.  You’re all right with that.

My hubby—for the first time in his adult life—does not require glasses to see distance or even to drive. He’s still quite amazed by the crystal clear view and is planning to donate his large collection of prescription glasses to a charity that helps people who can’t afford glasses. 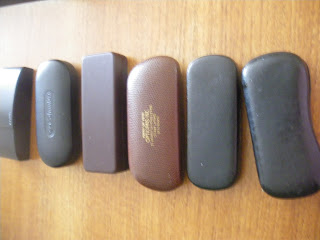 The only downside is that he now will need a prescription for reading glasses as each eye has a different correction for reading. The specialist said it's best to wait for a month before getting that prescription, Our cheap drugstore interim experiment has been a failure as has the patch on one lens!  Epic fail, we must say. 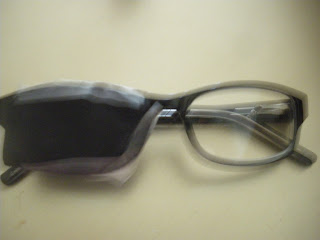 As he likes to read in bed, this will make for a long month for him.   We are just back from  the drugstore with a pirate patch for him! 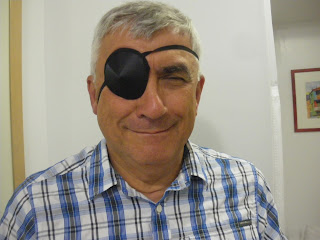 Here he is, being a good sport. 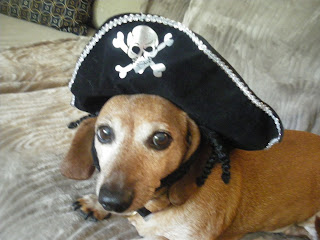 I offered to lend him Daisy's pirate hat, but he drew the line before that.

All kidding (and hats) aside, we still are counting ourselves lucky. It’s not that long ago that people lost their sight and much of their independence as a result of cataracts. Around here we’re feeling lucky to be living at a time when this surgery is possible.

We do have friends with macular degeneration and glaucoma and we were hoping that there will be corresponding advances in the treatment of these two huge and heartbreaking problems too.

How about you? Any experiences to report, good or bad?  Opinions or suggestions on where to send good quality eyeglasses that aren’t needed anymore? I bet we aren't the only ones looking.

never had surgery but i do have a suggestion for the interim -audio books!-
you might check with your local "blind center" they might know where to donate glasses.

Lions Clubs will take glasses. They do a lot of things for blind people. Audio books are good too.

I've worn glasses since I was in 5th grade so loved it when I had both cataracts removed within a 5 day period last year. My astigmatism was so bad in both eyes that it would have cost me an additional $1000 per eye to get it completely corrected. However, I've worn contacts for years and didn't mind continuing to do so. I could legally drive without the contacts in but everything is still fuzzy and I would only do so in an emergency. I was actually able to just buy readers so no more bifocals. I gave all my old glasses to the Lions Club. From what you've written, you seem to live fairly close to Ottawa which, I imagine, has a med school. You could check with the eye department and see if it would take the old glasses. Or ask the eye doctor and the center where the surgery was done. Cordella By the way, your husband would look cute with Daisy's pirate had although it's probably too small.

MJ: Deja vu or what? I just went to my eye doctor today for my annual eye exam because I'm diabetic and have family history of both glaucoma and cataracts. I had eye trouble 7 or 8 years ago with a broken blood vessel. Luckily, it mended itself as the doctor had hoped, but it still took 4 or 5 weeks. That was very scary, let me tell you. This time I noticed that I was only having trouble reading, and probably needed my script changed (yet again!)... and I do. I always keep my current pair on hand, just in case the new ones get broken. Yes, it has happened!! The others I always donate -- and with 3 of us who wear glasses, that's a lot of glasses over the years. We used to donate my son's glasses to Sight4Kids since they sent them all over the world for children in need. There are a couple of Canadian organizations you can donate to; one called "OneSight" which is sponsored by Lenscrafters and the David Suzuki Foundation; and the other is sponsored by the Lions' Club International or NewEyes. Hope everything goes fine with your hubby's recovery. PS - He rocked the eye patch! Keep it for his Halloween costume this year!!

Aww, I think Daisy's pirate hat would have looked awesome!

My eye dr.'s office takes old glasses - no surgery for me, but I'm pretty much handicapped without them, my arms just aren't long enough. I always keep the last pair on hand as well. Oh, and this year I got the regular glasses plus prescription glasses (it was somehow the same price as if I purchased only my regular pair, I don't know how that works) and I am sure glad I did. PS, Sam's Club has really good prices on cheaters.

My MIL had the surgery a few years ago, and it's one of the best things she ever did for herself. I'm glad to hear that your husband is doing so well - I'm sending prayers and positive vibes for a speedy recovery! :-)

Thanks, Malka! I think audio books would be perfect. We will alo check into the institute for the blind re glasses.

Thanks, Kaye! We have a local Lions Club - my next door neighbor is a member. I sense a time saver here.

Another vote for the Lions Club! Thanks, Cordella. I agree that he would look cute with the hat. Maybe I'll wait til he's having a nap and get a shot then,

Thanks, Laurie! We will check out these suggestions. The Lions Club appears to be in the lead here.

I think we'll see that eye patch on Oct 31st!

Maybe we'll have another opportunity here for the pirate hat, Jen! Daisy's not that possessive as long as there are the right number of treats.

Great info, Denise! Back before I started using the single contact lens, I used to say I needed arm extenders. We don't have Sam's Club, but Costco is their sister operation in Canada. Will check that out. Also Dr.'s office.

Thank you, Nicole! I am happy to hear that your MIL's surgery went well. It is a great thing for people to extend their seeing/reading life.

Interesting post today MJ - got me thinking about all the friends who have recently benefitted from the "new" techniques in cataract surgery. FYI, if you didn't already know,Canada is a leader in eye research; there is a west coast doctor who has developed a "bionic lens" that was recently in the news (CTV) and research into stem cell use for treating macular degeneration is also underway. Dalhousie Med School does a lot of research in the field of vision - probably goes back to 1917 after the explosion left so many with eye damage. Good luck to your dashing pirate! I foresee many hours of lounging with a cool beverage and listening to the latest in audio books.
Nancy R

My sweet Mama had hers done quite a few years ago. When she had the first eye operated on, I had taken her back for her post op and removal of her bandages. I took her home and was going to fix my Daddy and her some lunch before heading home. She went to her bedroom and we heard this blood curdling scream. I though Oh Lord something has happened with her eye, we rushed in and she said "I didn't know my hair was that grey!!" I though,t well now mine is because you scared me so bad, but it showed us how really bad her eyesight had gotten and how clearly she could now see.

I had my left eye done on July 18. My right eye is not ready at all. I had a plastic cover on my eye for one night. I did not get a sandwich, just a drink (surgury center not actual hospital). But, I could see enough to drive the next afternoon. I am waiting for new glasses due to astigmatism. My dr. did not recommend special lenses (could have paid for them). I did by reading glasses to use in the meantime. My eyes tire easily due to astigmatism. My dad had to stay still for a week when he had first eye done = that was over 40 yrs ago.

Thanks for that update, Nancy, I didn't know about the bionic lens and the stem cell use for treating macular. Fingers crossed for more advances.

What a story, Jeannie! I love your reaction too. I think cataracts are very gradual and insidious and they creep up on us.

I hope you continue to heal quickly, Rachelle and you are able to read comfortably soon.

I see you also remember the week in the hospital staying still. Much better now!

Hooray for the modern advancements!! My cataract surgery was a piece of cake, too. I had the right eye done in 2010 and the left eye done in late 2013, because cataracts appeared at different times in the different eyes. Interestingly, my eyes had developed what's called "mono-vision" on their own. That means one eye sees near and the other eye sees intermediate and far. The right eye (near vision) had surgery first and the doctor gave me 20/15 vision, so I will never need reading glasses. And can read that tiny printing on bottles. In 2013, my left or distance eye had the surgery and doctor gave me that intermediate-distance lens. So I can read signs in the distance and watch bald eagles soaring high in the sky and all the far stuff. And I don't need glasses for anything. And the cool thing is, these lenses will NEVER age, so we won't have future problems. :) Yay!!