With my Mum being ill, we got behind on a lot of things this spring...among them planting our crops. 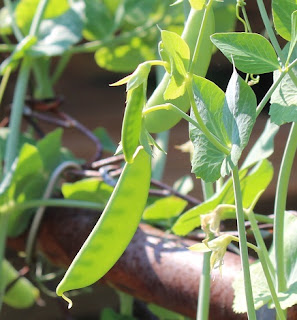 I've about given up trying to grow much in my former veggie garden. Things like pole beans, Brussels sprouts, etc. because the critters like to eat them. I did manage to get the peas in a day or so before May first, and we've been  harvesting pea pods for stir fry for about two weeks now.  I used "old" seeds that I found in my kitchen junk drawer.  Mr. L was skeptical, but I figured if scientists could sprout wheat from the pharaohs' tombs, then I could grow peas from seeds that were 3-4 years old.  And I did, as evidenced by this picture.  Actually, I planted snow peas and snap peas.  So some are flat and some aren't, but if you catch them early enough, they are both fine sauted with mushrooms. 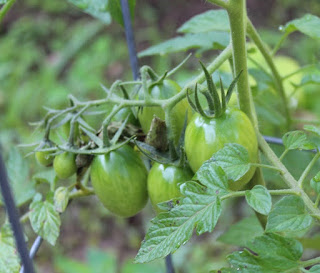 We decided we didn't want to wait until Labor Day to eat our first tomatoes, so this year we bought two BIG plants (Celebrity) that already had flowers and tomatoes.  They don't seem to be doing much, whereas the weeney plants we bought (also Celebrity, but cherry and grape tomatoes, too) decided they like our soil, and so they are doing well.  I think these are supposed to be cherry tomatoes. I'll guess we'll know in another week or so.  I'd like to be using them in salads well before August. 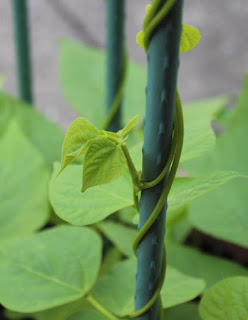 The pole beans went in late, too, but since Memorial Day was early this year, perhaps they were in the same time as last year.  I grew them from last year's seeds, and while there aren't a lot of them, the container won't be so crowded and maybe we'll actually get more beans than we did last year.  I tossed a few seeds into the veggie garden near the peas, but most of them got eaten (as I knew they would) and the rest don't look very happy.  (They ought to commune with the tomatoes to see why they LIKE the same soil.)

Last week, I was in the junk drawer again (looking for something else) when I came across a bunch of lettuce seeds. 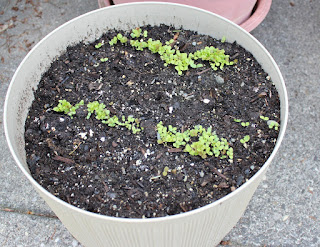 I've only grown lettuce once before, so I wasn't sure how many seeds to put in the pot.  It looks like I may have put in too many.  The packages (I had two of them; one with one kind of lettuce, and the other with a 5-kind mix) both said it would take 10-15 days to sprout.  Ha!  The more "common" version of the lettuce shot out of the container in about five days.  Still waiting for the fancy-schmancy kind.

We won't have a lot of veggies (although with just two people, maybe that's good. I hate to see food wasted), but we'll sure enjoy them.

What are you growing in your veggie garden?

Posted by Lorraine Bartlett at 9:30 AM

Good for you, Lorraine. If I had to be the gardener, in our family, we would be out of luck. Hubby plants a small garden. It wouldn't be summer without homegrown tomatoes!

I usually plant 2 tomatoes and 1 zucchini but needed to get the wood chips down first, was going to be out of town for a few days when it was too hot to start plants, and finally decided to ask friends for fresh zucchini (have to buy a spiralizer and try Mary's recipes) and buy tomatoes at the farmer's market. While you in the Midwest and East are having storms with lots of rain and cooler temps, we in the West are having record highs and no measurable rain since June 3 so would have to water veggies every day. Cordella P.S., you said I would need a tissue to read "A Fatal Chapter," and I did.

I've found as long as you keep your unused seed in a cool, dark place, they will germinate. Lettuce does indeed spring up like weeds! Prefer pickling cucumbers to regular, not so acidic or picky re growing conditions! In AK, tomatoes always need TLC...either too hot or too cool...nothing in between :) Potatoes, peas, cole crops flourish but the moose love them, too! Fences in order!

I agree. The ones you get in the store--even the hydroponic ones--are tasteless. Can't wait to have one from my own yard.

I'm glad the story touched you.

The critters in our yard bypass the fence by digging under it. I love wildlife, but I prefer it staying wild and out of my yard!!!

For the first time in 25 years the deer ate the tops of the tomato plants that are in pots at the end of the driveway right next to our garage. Brave deer this year. The tomatoes are growing new tops and starting all over to flower again. I sure hope they enjoyed those tiny tomatoes that they ate.

I have really good tomatoes this year and cucumbers. I had some radishes early this spring. I got my lettuce in late and for some reason it did not do well. First time I have ever had problems with my lettuce. White Half Runner green beans are coming on slowly. Nothing better than a good homegrown tomato.

The tomatoes look like Juliette - which is a cross between roma and grape. The end result is smaller than a roma, bigger than a grape. Very tasty fresh or cooked.

As for the lettuce, just tell yourself you are growing baby lettuce. Thin them out (4 inches apart) to grow big lettuce plants.