Are we there yet?

It never, ever fails within 30 minutes of stuffing the car to its gills with luggage and people for a getaway, you’re left wondering how can I get everyone to the final destination without them killing each other...or me killing them. Despite popular in-car entertainment such as DVD players after the first 200 miles it’s nice to mix it up a little. And it’s a fun way for you to tune in with the fam during trip instead of everyone tuning out on a movie or a video game.
So, here’s some of my favs we played as a family and they don't require any tools, paper or accessories beyond the open road. Depending on the age of the vacationer you can tweak the games to make them work.

I Spy  is probably the classic make-time-go-by game of all time. One person looks around and chooses an object that the others have to guess, with their only clue being these words: "I spy with my little eye something that begins with (insert the first letter of the object's name)." Or the clue can be the object's color. The player who guesses the object gets to go next. It's not fair to "spy" something that's whizzing by the car but a landmark (mountain range, forest) that’s in view for a few minutes is good. 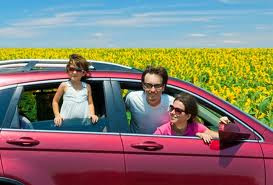 .
.                 20 Questions  The first person thinks of, well, anything. The first question the next player asks is always, "Animal, vegetable or mineral?" After that, the players can ask pointed questions to try and guess. Go around the car in a circle asking for clues such as, “ does it bark?” or "Can you peel it?" The answer can only be "yes" or "no." If you reach the 20th question without a winner, everyone has one last chance to figure it out before the "thing" is revealed and another person starts a fresh round.
.
. 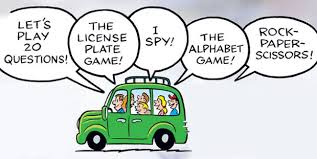 License Plates There are many ways to play with license plates, depending on the age of your kids. Young kids can call out letters in alphabetical order; the first one to Z wins. Next, have them look for doubles — or better yet, triples! — of letters and/or numbers in the plates. The one who has the most at the end of the day/trip wins. Older kids can "collect" out-of-state plates they see. 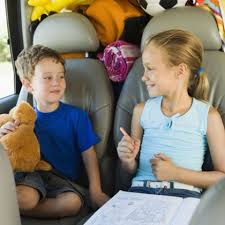 .
.                 Where's the Alphabet?   You use road signs, billboards, shop names — any reading material outside the window qualifies as long as it's spotted on your side of the car. Look for every letter of the alphabet, in alphabetical order, although the letter can be located anywhere in the word.
.
.                 Name That Tune Like with the classic TV game show, the winner here is the one who figures out the name of the "mystery song" first. For those with singing/whistling/humming talent, this can be as much karaoke as a guessing game. Choose a theme for the game, such as show tunes, movie or TV themes, or Justin Timberlake. (Good luck, mom and dad.) The winner gets to be the singer for the next round. If no one can carry a tune in a bucket (like my family) then try guessing the songs on the radio. Hit the "seek" button so no one gets an unfair advantage from sticking to one particular station.
.
.                 The Picnic Game   One player says, "I went to a picnic Saturday and I brought..." then says a picnic favorite that begins with the letter A, like apples. The next player repeats the opening phrase, and after "...I brought" they repeat the A item then add one that begins with B: "I brought an apple and some bananas." The third player repeats the opener, the A and the B portions, and then adds something that begins with C. Get it?
. 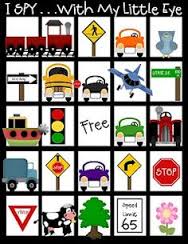 .                 Count the...  It can be anything: cows, telephone poles, headlights, train cars, blue pickup trucks — you name it. Shouting out the thing to keep track of is all that is required and is good for the younger kids.
.
.                 Tunnels  When you come to a tunnel, see who can hold their breath the longest. True, it may not be one best played by the driver but everyone else can give it a go.
.
Geography Lesson  The first player names a location, and the next player has to rattle off another that starts with the last letter of the previous player's state. If it were Michigan, the next state would have to start with N, like Nebraska. The A could be Alaska, and so on.

I hope this helps if you’re driving along. IMO the games and videos are fantastic but once in a while it’s nice to talk. So what about you? Is there a fav car game you all play?
Posted by Duffy Brown at 1:00 AM