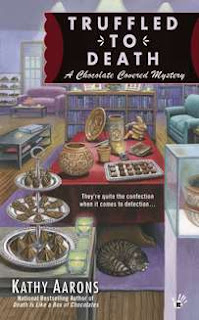 Two best friends sell books and bonbons—and solve crimes—in this mystery from the author of Death Is Like a Box of Chocolates.

Hoping to sweeten sales for their shop, Chocolates and Chapters, Michelle and Erica host a reception highlighting a new museum display of ancient Mayan pottery curated by Erica’s former mentor, Professor Addison Moody. The evening has a few hiccups, but the ladies soon smooth things over with ample servings of wine and chocolate.

Yet with the sweet comes the bitter. The very next day, the antiquities from the reception are discovered missing. The professor accuses Erica of having sticky fingers, claiming she wants revenge on him. And she’s only in more trouble after he’s found stabbed to death with one of the artifacts. Now Michelle must help Erica track down the real killer before someone else finds themselves in less than mint condition. 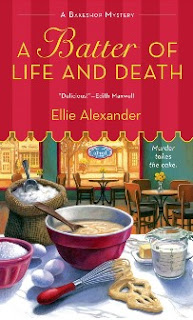 Welcome to Torte-a small-town family bakeshop where the coffee is hot, the muffins are fresh, and the cakes are definitely to die for.

It's autumn in Ashland, Oregon-'tis the season for a spiced hot apple cider with a serving (or two) of Torte's famous peach cobbler. It's also the perfect time for Jules Capshaw to promote her family's beloved bake shop by competing in The Pastry Channel's reality show, Take the Cake. The prize is $25,000. But as Jules quickly learns, some people would kill for that kind of dough. Literally.

Then, just as Jules dusts off her Bavarian Chocolate Cake recipe and cinches up her apron, the corpse of a fellow contestant is discovered-death by buttercream. What began as a fun, tasteful televised adventure has morphed into something of a true-crime detective show for Jules and everybody else on set. Who could have killed Chef Marco, and why? Can Jules sift out the killer before someone else gets burned? 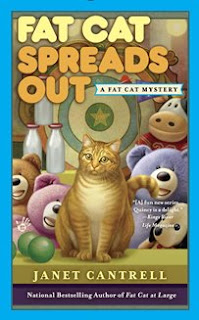 Butterscotch tabby Quincy is back and hungrier than ever in this frisky follow-up to Fat Cat at Large.

A booth at the Bunyan County Harvest Fair seems like the perfect opportunity for Charity “Chase” Oliver and Anna Larson to promote their Bar None bakery business. Unfortunately, plus-sized pussycat Quincy has plans for their delicious dessert bars other than selling them to customers. After tearing through their inventory, Quincy goes roaming the fairgrounds in search of more delights.

But what he finds is murder. One of the top contenders in a butter-sculpting contest has been killed, and Chase is churning on the inside when she sees Quincy’s handsome veterinarian, Dr. Mike Ramos, being led away by the police. With a little help from a kitty with butter on his whiskers, Chase needs to find the real killer and clear the doctor’s good name 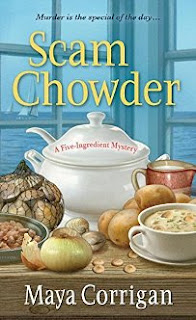 Val Deniston loves the historic Chesapeake Bay town where she lives with her grandfather, the Codger Cook. Running the fitness club’s Cool Down Café—and salvaging the five-ingredient dishes Granddad messes up—keeps her busy. She’s used to his catastrophes in the kitchen, but not in the dining room.

Especially when one of his dinner party guests winds up face down in the chowder. The demised diner apparently scammed Granddad’s best buddy, and since the other dinner guests have suddenly clammed up, the police have all the ingredients to cook up a conviction for Granddad. With his freedom—and Val’s café job—on the line, Val is in a sweat trying to avert a catastrophe. But dredging up old secrets might just be a recipe for murder. 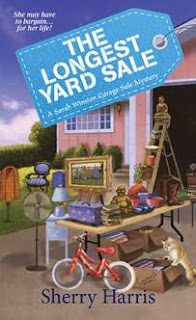 ONE MAN’S CLUTTER
When Sarah Winston turns Ellington, Massachusetts, into New England’s largest garage sale for a day, it’s the small town’s biggest event since the start of the Revolutionary War—but without the bloodshed. That is, until a valuable painting goes missing…and the lifeless body of an Air Force officer is found in Carol Carson’s painting studio, his face perfectly framed with the murder weapon—a metal picture frame.

IS ANOTHER MAN’S CLOVER
Sarah is mad as heck that someone used her town-wide garage sale to commit a crime—and frame her good friend Carol. She is definitely on this case…but it’s not easy rummaging through increasingly strange clues that point to cheating spouses, downright dirty investment schemes—even the mob. And Sarah will have to be very careful if she wants to live to bargain another day. 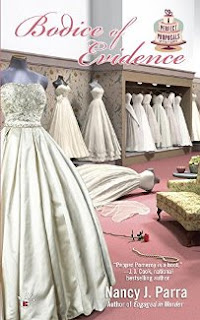 This time Pepper Pomeroy discovers that shopping for the dream wedding dress can be a nightmare.

Pepper’s new wedding proposal planning business, Perfect Proposals, seems like a perfect fit. If only shopping for her sister Felicity’s bridal gown could be so simple.

After a long day of lace, tulle, and tears, Pepper, Felicity, and their mother pull it together to try one last bridal boutique. Maybe they’ll be surprised. And indeed they are—when they enter a deserted shop and soon discover the owner of the boutique slain in the alley out back.

Distressed by their proximity to the crime, Pepper vows to unveil the killer. As difficult as it is to draw a pattern from the clues, it’s still easier than finding Felicity’s perfect wedding gown. But as the killer begins to feel hemmed in, Pepper may be the one brought to her knees. 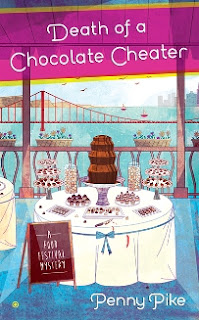 Food truck vendor Darcy Burnett unwraps a murder at the San Francisco Chocolate Festival in this mystery from the author of Death of a Crabby Cook.

At this year’s chocolate festival, Darcy and her Aunt Abby hope to win the $10,000 prize in the chocolate contest with Aunt Abby’s taste sensation: the chocolate raspberry whoopee pie. A little friendly competition from Darcy’s sometime-beau Jake Miller, who plans to enter with his chocolate cream puff delight, only sweetens the deal. But things get sticky when one of the judges, Polly Montgomery, is taken out of commission—permanently.

The suspects include every contestant with reason to believe Polly wasn’t too sweet on their sweets, including Aunt Abby’s high school friend. Now Darcy must pick through an assortment of secrets to catch a killer before someone else gets a bittersweet finish.

Awesomeness Abounds! Thanks for sharing!

These all look good, very good. Thanks Dru Ann!

I love to read your reviews, but then...... I also want to get each and every book too. I know that I am not alone in this desire to get every book that is of interest to me. If my husband didn't use 90% of our lower level for a workshop, I would have plenty of room for my books, but...... that isn't going to happen. I will have to go to more e-books I guess, but there is nothing like seeing a great cover in your hands and holding a paperback either. Thanks for the great information/reviews, Dru.
Cynthia B.